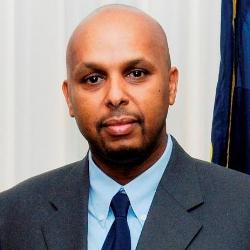 PHOTO: Musse Olol a Somali born engineer founded the Somali American Council of Oregon after the terror case exposed the vulnerability of Somali immigrant youth. The Skanner News talked to Olol about his fears in a January 2013 story: Somali Council of Oregon Seeks to Unite Frightened Community.

PORTLAND, Ore. (AP) — Defense attorneys will argue Wednesday morning that a Portland, Oregon, man convicted of terrorism charges should be acquitted or granted a new trial.

Oral arguments will focus on the government's use of evidence and its reliance on surveillance obtained through extrajudicial means. 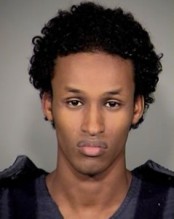 The attorneys for Mohamed Mohamud (pictured in a mugshot at left) say prosecutors failed to notify them of information derived under the U.S. Foreign Intelligence Surveillance Act until Mohamud had already been convicted.

That failure, they say, withheld important information from the defense team and violated Mohamud's constitutional rights.

Prosecutors responded in pre-hearing briefs that they didn't disclose any new information when they informed Mohamud's defense team of the surveillance in November.

Mohamud was convicted last year of attempting to detonate a bomb at Portland's Christmas tree-lighting ceremony in 2010.

The purported plot was actually an FBI sting and the bomb was a fake.