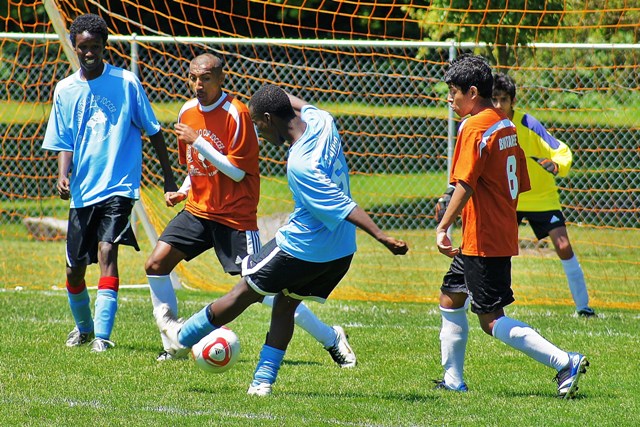 Portland Timbers midfielder Steven Evans is a special guest who will be hanging out with PP&R’s Creative Youth Soccer Leaders to encourage teens to learn more about the upcoming 5th annual tournament, set for July 3 - 4, at Delta Park.

The Portland World Cup Soccer Tournament engages underserved and underrepresented immigrant and refugee youth who’ve come to Portland from all over the world, representing nearly two dozen ethnicities and cultures.  This event is an important celebration of diversity, family, partnership, and integration in Portland.

“When we talk about ‘closing the play gap’ here in Portland, we mean providing for people who need parks, recreation and play the most,” says Portland Parks Commissioner Amanda Fritz. “The Portland World Cup Soccer Tournament and its related activities help foster awareness about what our city offers for people new to Portland – athletic, educational, career opportunities and more - through the international language of football - also known as soccer here in Portland.”

“The Portland World Cup Soccer Tournament is about much more than a game,” says Polo Catalani of the Office of Equity and Human Rights.  “It’s about investing our efforts now to embrace the changing face of our city, about integrating people new to both Portland and the United States into our society and our quality of life, and about showing them how to take part in democracy.”

Catalani notes that one in five Portlanders are now foreign-born, and nearly half of area public school students belong to ethnic minority families. In many underserved north and east Portland neighborhoods, these percentages are even higher.

Portland Parks & Recreation first developed the Portland World Cup in 2010. The tournament brings to the pitch a celebration of cultural traditions and diversity - an enrichment event that links the culturally diverse communities, the Portland community, and the City of Portland. This event is a gathering for Portland’s youth to kick for a common purpose.

More than two dozen local community organizations join together with the City of Portland to host the annual tournament at DeltaPark.  The 2013 tournament included 14 teams and more than 200 athletes, representing more than a dozen countries.  The players’ ages range from 16-19 years old.

The event is co-sponsored by the Immigrant & Refugee Community Organization, DavidDouglasSchool District, Portland Office of Equity and Human Rights, the Oregon Bhutanese community and the African Youth Council of Oregon