By Brian Stimson of The Skanner News
Published: 04 November 2010 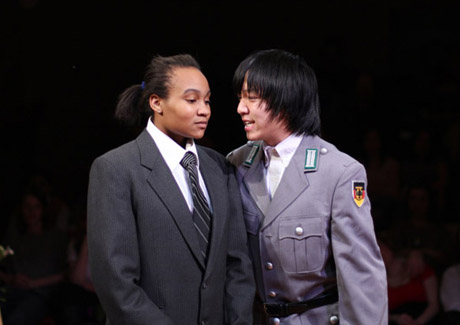 For three days this November, seven area high schools and the Portland Playhouse are bringing Shakespeare to town.

"It's shocking how maturely they play the bawdy jokes," says Weaver, director of the Fall Festival of Shakespeare and co-founder/artistic director of the Portland Playhouse.

From Nov. 5 through 7, seven local high schools will perform seven different Shakespeare plays – and a bonus eighth featuring cast members from all the plays – at the Winningstad Theatre in Downtown Portland. On Friday, Nov. 5 at 6 p.m. Hudson's Bay performs "A Midsummer Night's Dream" followed by De La Salle's "Comedy of Errors"; on Saturday, Nov. 6 at 2 p.m. Cleveland performs "King Lear" and at 6 p.m. Ft. Vancouver performs "Twelfth Night" followed by Jefferson's "Julius Caesar"; and on Sunday, Nov. 7 at 4 p.m. Catlin Gable performs "As You Like It" followed by Lincoln's "MacBeth." All students will be performing "Reverence" during the close of the Sunday program.

The Fall Festival of Shakespeare, in its second year with founder and partner Portland Playhouse, aims to bring a diverse ensemble of actors from across the Portland-Vancouver Metro area to collaborate and learn from one another. This year's festival has expanded from two to seven plays, and is playing at a Portland Center for Performing Arts venue for the first time.

"It's not required for anybody, it's all public auditions for all interested students," says Weaver. "The emotions are big, the stakes are high, its tragedy and romance and love and death and betrayal. It's just like high school."

Except – unlike many things in high school — there are no contests or prizes or ribbons. Everything is produced in an atmosphere of learning, collaboration and creative expression. The 150 student actors began their journey with three common classes before going back to practice at their own schools.

"They build relationships through the process," Weaver says. "It happens fairly quickly because when they meet each other, they realize they've been working on the same things, learning the same exercises, they've been approaching Shakespeare in the same way."

Coleman visited Portland Playhouse to hold a multi-day training session this year. While each school and director produced their own plays, in the style they chose, the festival as a whole has a common theme and goals.

Weaver says they tried to approach the plays much like the original cast members did when they were first produced. The Playhouse directors served not as traditional play directors – instructing actor's movement and such – but to empower and teach the student actors.

"It's believing that the actor is the creative engine," he told The Skanner News.

Actors were fed lines verbally from other students, learning from verbal memory instead of the printed page.

And the audience, which in modern times has grown accustomed to sitting silently respectful as a viewer, is once again engaged as an active participant. There was no fourth wall in Elizabethan England.

Weaver says high school actors are extremely adept at performing Shakespeare. In the weeks before the plays were to be  performed at their schools, he says students would get together in groups are perform "pop-up" scenes.

"It's wonderful to see how they support each other," he said. "This one guy got up and did the Edmund speech from King Lear – the 'gods, stand up for bastards' speech. Everyone was all around him in the cafeteria and he was doing this speech and talking to all these people right on. And at the end he was like 'Now, gods, stand up for bastards!' and everyone spontaneously leapt to their feet and cheering and applauding and going crazy. It was like a madhouse."

For tickets to the Fall Festival of Shakespeare, visit the PCPA Box office at 1111 SW Broadway or buy them through TicketMaster. For more information, visit www.portlandplayhouse. org/fall-festival-of-shakespeare.
Thank you.