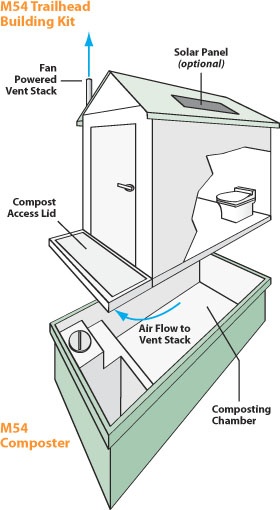 The city of Seattle has installed its first composting toilet at the Picardo Farm Garden P-Patch.
For years, volunteers at the 281 plot garden wanted a permanent restroom, instead relying on the chemical Honey Bucket to dispose of their personal waste. The planning for a composting system was approved in the early 2000s.
The Clivus Multrum M54W is both a composting system and building, holding lightly packed wood shavings underneath. A solar-powered bilge pump converts waste matter to carbon dioxide and distribute it throughout the shavings. Fans, also powered by the sun, help produce fresh air. Periodic maintenance means all composted matter can be removed and distributed elsewhere as fertilizer ... or as some people call it -- Humanure.