Film Review: The Princess and the Frog 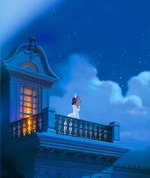 All Tiana (Anika Noni Rose) ever dreamed about as a child was of one day having her own restaurant in New Orleans where she could make gumbo alongside her father (Terrence Howard), an aspiring chef. But he passed away while serving overseas in the military during World War I, leaving it to his widow, Eudora (Oprah Winfrey), to raise their daughter alone on a meager seamstress' salary. Consequently, Tiana ended up having to work overtime as a waitress in order to save enough money to purchase the abandoned warehouse she wants to convert into an eatery.
However, the blossoming beauty's plan goes horribly awry when she is asked for a kiss by a frog while attending a costume party dressed as a princess. For the frog is actually Prince Naveen (Bruce Campos), who has been turned into a frog by a voodoo-practicing, diabolical witch doctor (Keith David). But because Tiania isn't a real princess, a smooch from her fails to break the spell. Worse, she is also instantly transformed into a frog, leaving the two of them stuck in quite a terrible predicament.
Thus unfolds "The Princess and the Frog," an animated version of "The Frog Princess," the popular children's novel by E.D. Baker. This enchanting fairy tale, directed by Ron Clements and John Musker, makes history as the first of Disney's 49 full-length cartoons to revolve around a Black princess, although the Mouse House has in recent years featured Asian (Mulan), Native American (Pocahontas) and Arab (Aladdin) heroes.
Visually, the picture is a bit of a throwback, as it relies on hand-painted cells rather than the computer-generated imagery which has become generally embraced as the state-of-the-art. Nonetheless, in the Disney tradition, the movie proves to be a magical blend of romance and song.
En route to their re-humanization and a syrupy-sweet "happily-ever-after" sendoff into the proverbial sunset, our frustrated frogs enlist the assistance of a menagerie of colorful characters who intervene on their behalf, most notably, a firefly (Ray Cummings), an alligator (Michael Leon-Wooley) and a benign high priestess (Jenifer Lewis). Between its jaunty jazz/blues/zydeco soundtrack (ranging from Randy Newman to Doctor John) and a stellar voice cast topped by Anika Noni Rose, Keith David and John Goodman, "The Princess and the Frog" adds up to a satisfying, cinematic treat.
Sure, the tale it feels a tad old-fashioned, given its reliance on a slight variation of the age-old frog into a Prince plotline, but that familiarity doesn't diminish the experience one iota. Still, what we have here is an instant animated classic destined to delight kids of all ages for generations to come!

To see a trailer for The Princess and the Frog, visit:
http://www.youtube.com/watch?v=Pq8-gTJhtDs