Film Review: Everything Everywhere All at Once 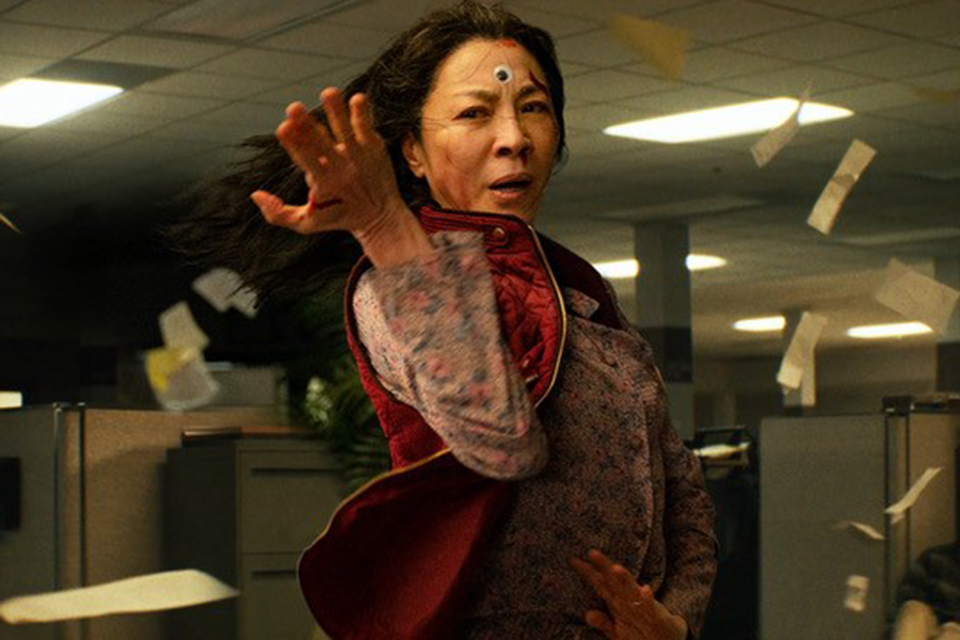 She’s yanked, pushed and pulled. To here, there, everywhere. To times and places she couldn’t imagine.

The very drably attired Evelyn Wang (Michelle Yeoh) owns and operates a laundromat with her nerdy looking husband Waymond (Ke Huy Quan, Indiana Jones and the Temple of Doom). At least she thought he was her spouse. He may be somebody from another dimension drafting her for a dire mission… 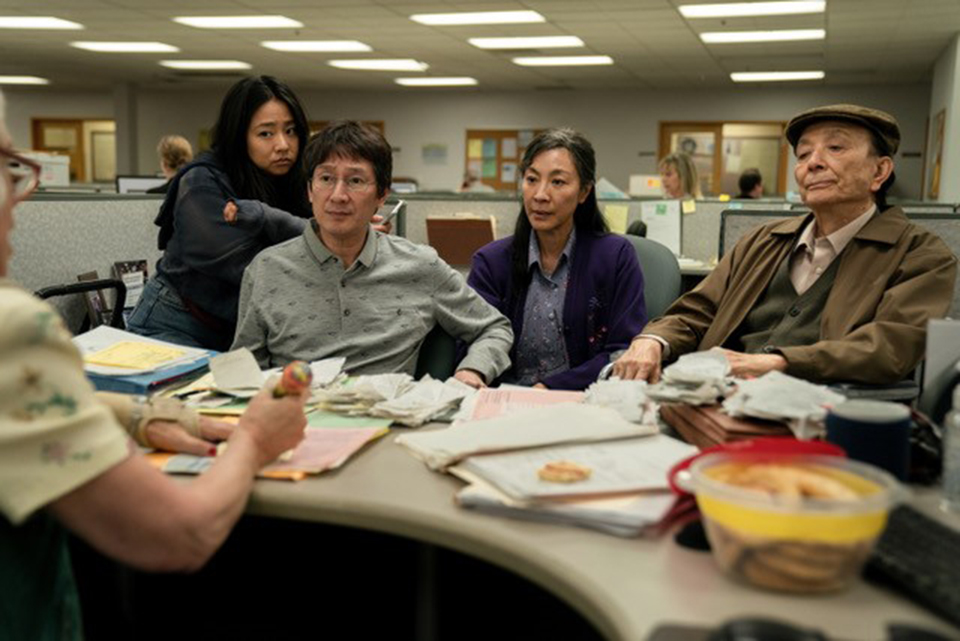 Stephanie Hsu, Ke Huy Quan, Michelle Yeoh, James Hong in Everything Everywhere All at Once

But Evelyn already has a lot of responsibilities. She tends to her elderly father (James Hong, TV’s Kung Fu Panda: The Paws of Destiny), parents her needy twentysomething daughter Joy (Stephanie Hsu, The Marvelous Mrs. Maisel) and preps for a tax audit with an embittered IRS investigator (Jamie Lee Curtis, Halloween). Adding crusading fighter and savior of the universe to her resume may be a bit much.

Flurries of blistering, fast-paced images (cinematographer Larkin Seiple; editor Paul Rogers) along with a frenetic score (Son Lux) will either whip audiences into a frenzy or annoy them to death. Initial grungy sets, from a tiny apartment to a dingy laundromat and cold IRS offices, are eyesores (art director Paul Rogers, production design Jason Kisvarday, Sorry to Bother You). 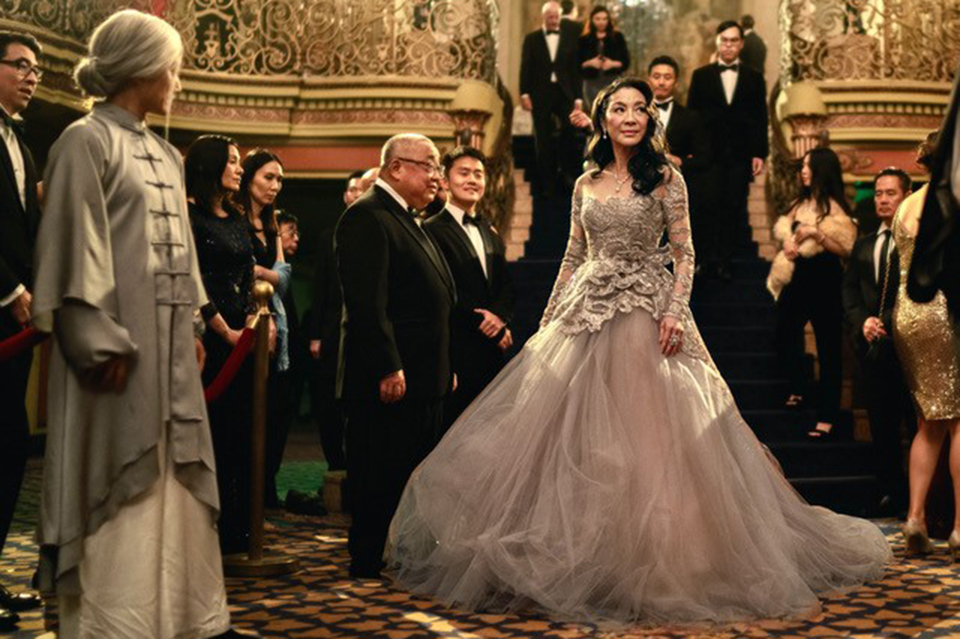 Michelle Yeoh in Everything Everywhere All at Once

Then along comes beautifully crafted flashbacks or flashforwards, where Yeoh is dressed in stunning floor-length gowns (costume designer Shirley Kurata) with Veronica Lake hair (hair stylist Nina Adado) and Quan is looking snazzy in black suits with trendy glasses and his hair slicked back. The couple cleans up quite nicely. 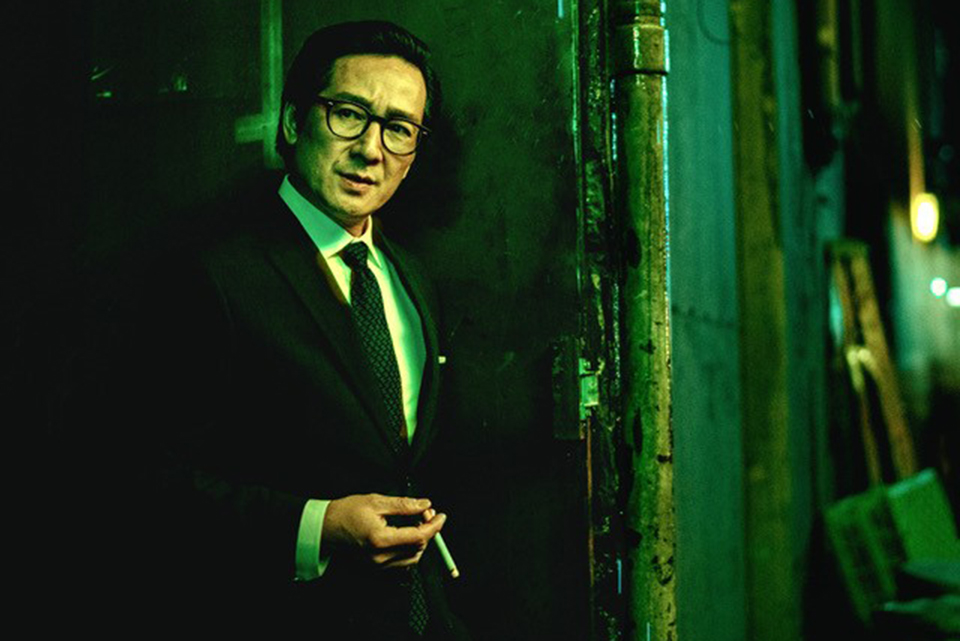 Key Hu Quan in Everything Everywhere All at Once

Too much of the storyline involves save the world edicts and weird sometimes comic combat scenes. The film only becomes emotionally grounded when it depicts Evelyn trying to repair her frayed relationship with her lesbian daughter who wants her lover Becky (comedian Tallie Medel) to be accepted into the Wang family. When the do or die plot pieces give way to save and mend themes, redeeming qualities emerge.

For those with peculiar taste

Credit or blame writers and directors Daniel Kwan & Daniel Scheinert (aka the Daniels) for dragging the audience into their hectic world—a realm inspired by artist Ikeda Manabu, whose artworks tend to be dense, detailed and turbulent. Their interpretation of his style is manifested in 2h 10min of unruly mayhem, frantic action scenes, manic sojourns down rabbit holes and migraine-inducing hysteria. It’s a peculiar taste that might even split the opinions of diehard sci-fi/act/com fans. While other viewers may run out of the theater with their heads throbbing and searching for a bottle of Tylenol.

Through it all, like a trooper, Yeoh (Crazy Rich Asians, Crouching Tiger, Hidden Dragon) shows a certain versatility and great patience in a film that’s like a Whac-A-Mole game run amuck. Her confrontational and tender moments with Hsu are precious. Jamie Lee Curtis gets her ugly on investigating the Wangs like she’s a rogue cop. Credit some of the footage’s nightmarish midnight movie feel to her antics. Other cast members, Quan, Hong, Medel, Jenny Slate and Harry Shum Jr., fill out an ensemble that’s the movie’s strongest asset.