Performers Gear up for the Macy’s Thanksgiving Day Parade 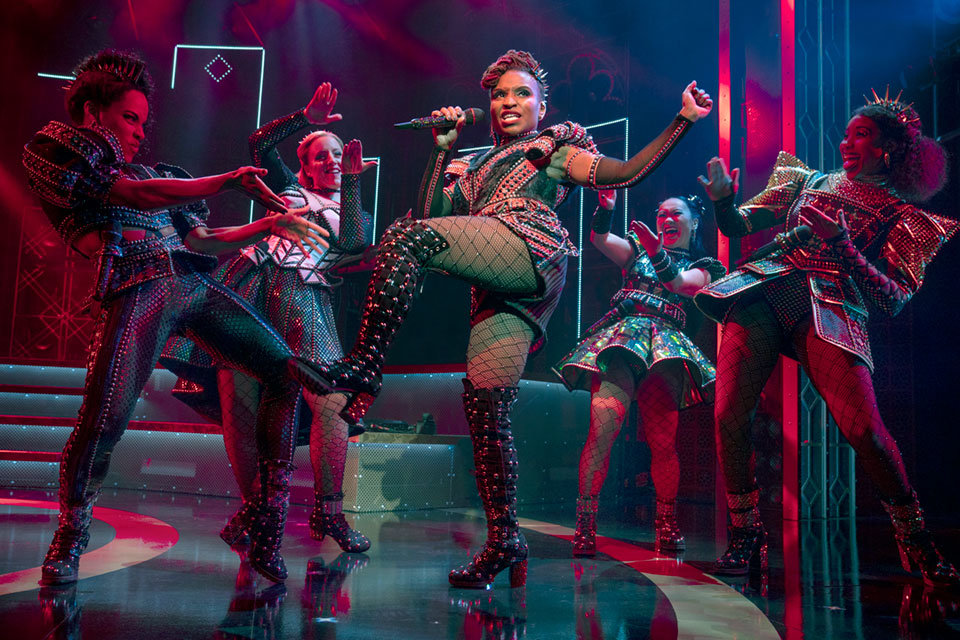 NEW YORK (AP) — Growing up in Chicago, Broadway star Brittney Mack faithfully watched the Macy's Thanksgiving Day Parade on TV after fulfilling her own parade duties. Now she's getting ready to bundle up, hit the streets of Manhattan and be part of the big one for the first time.

Mack, who plays one of the wives of Henry VIII in the hit musical “Six,” is slated to perform a mashup of some of its songs live Thursday with her castmates and band in front of a televised audience of millions.

“I’ve got my long johns and it’s going to be epic,” she says. “I finally get to meet Snoopy. That’s really my dream — to see the big Snoopy balloon, honestly.”

Astronaut Snoopy will hover overhead as the parade returns to its pre-pandemic form this year, with its route restored through Manhattan and high-flying helium balloons once again pulled by handlers.

This year's parade — the 95th annual — will snap back to form after bowing to pandemic restrictions last year. It will feature 15 giant character balloons, 28 floats, 36 novelty and heritage inflatables, more than 800 clowns, 10 marching bands and nine performance groups and, of course, Santa Claus bringing up the rear.

New balloon giants joining the line-up include Ada Twist, Scientist; the pint-sized hero from “The Mandalorian” and the Pokémon characters Pikachu and Eevee on a sled. 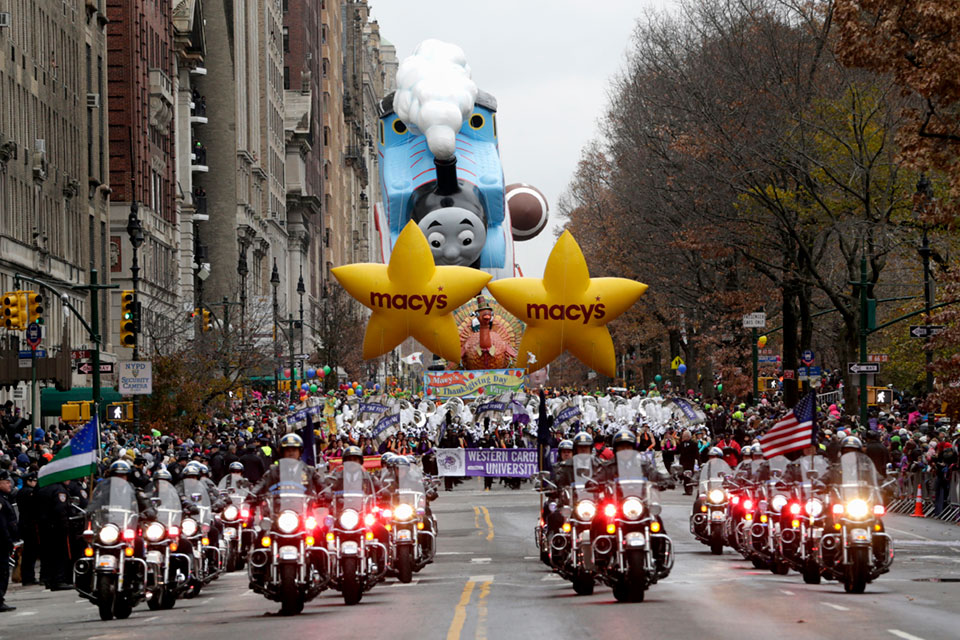 Mack and her castmates have learned new choreography, been over the new music and will rehearse on the street in front of the department store to get it right. With the weather looking brisk, she's kindly ordered handwarmers and footwarmers for her fellow “Six” performers. “I won’t be home to watch it, but I think the trade-off is pretty good,” she says.

Her grandmother is taping the parade from Mississippi while her mom and the rest of her family will be cheering from Chicago. Mack may be used to performing live but this time is special.

“The adult in me that has worked so hard to get here is like, ‘You know what? You’ll be fine. You’re in it. Get it together,’” she says. "I think I also will feel better when I see Snoopy, so it’ll all be good."

In addition to “Six,” Broadway will be represented by the casts of “Chicago,” “Waitress,” “Moulin Rouge! The Musical” and “Wicked.” The Rockettes will be there, as will the cast of the upcoming NBC live production of “Annie.”

Maya Bowles, who will be there representing the Tony-winning “Moulin Rouge! The Musical,” recalls waking up every Thanksgiving in Atlanta and making pound cake with her mother while watching the parade before gathering with her family at grandma's house.

“It definitely does feel so special coming back after this long, long pause,” she said. “So much has changed so quickly. I feel like, for me, it’s weird not being with them for the holiday, but I’m super-grateful to be doing what I’ll be doing.”

As in years past, the New York Police Department said it will block off all vehicle access points to the parade route with sand-filled garbage trucks, other heavy vehicles and approximately 360,000 pounds of concrete barriers. Thousands of officers are assigned to the parade route, including counterterrorism teams. Police Commissioner Dermot Shea said there were no specific, credible threats to the parade.

There will be new floats led by the cast of “Girls5eva” — Sara Bareilles, Renée Elise Goldsberry, Paula Pell and Busy Philipps — Nelly and Jordan Fisher, while Jon Batiste will be on an alligator-themed float celebrating Louisiana's music, food and culture.

Some of the returning balloons will be "The Boss Baby," “Diary of a Wimpy Kid,” Chase from “Paw Patrol," the Pillsbury Doughboy, Ronald McDonald, Red Titan from “Ryan’s World,” Papa Smurf, Sonic the Hedgehog and SpongeBob SquarePants. 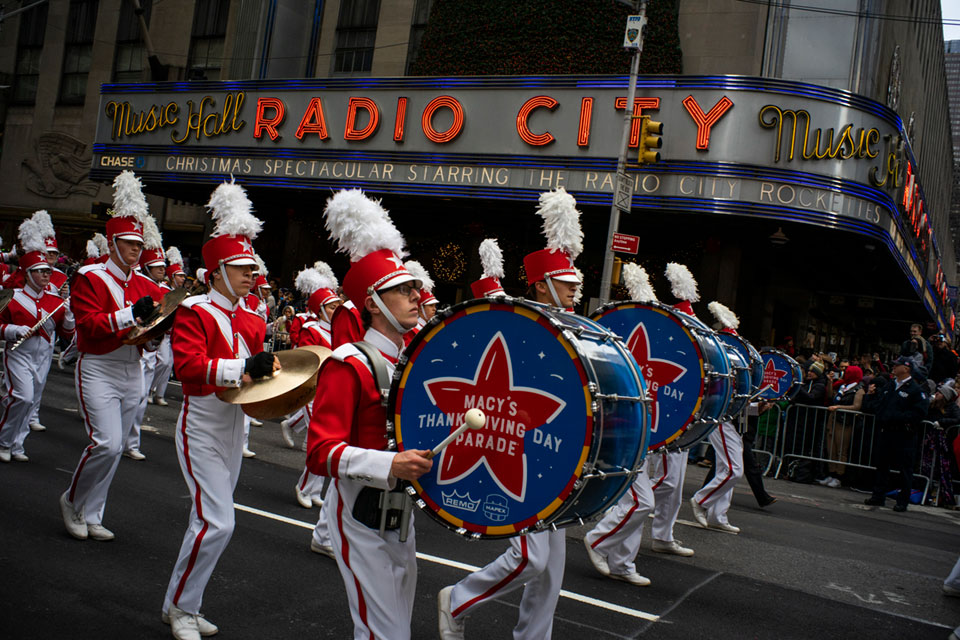 FILE - Revelers makes their way down the Avenue of the Americas in front of Radio City Music Hall during the Macy's Thanksgiving Day Parade in New York on Nov. 28, 2019. This year’s parade will snap back to form after bowing to pandemic restrictions last year. It will feature 15 giant character balloons, 28 floats, 36 novelty and heritage inflatables, more than 800 clowns, 10 marching bands and nine performance groups and, of course, Santa Claus (AP Photo/Eduardo Munoz Alvarez, File)

The Macy’s parade has been a traditional holiday season kickoff and spectators often line up a half-dozen deep along the route to cheer about 8,000 marchers, two dozen floats, entertainers and marching bands.

Last year, the usual 2 1/2-mile route through crowded Manhattan was scrapped in favor of concentrating events to a one-block stretch of 34th Street in front of the retailer’s flagship Manhattan store. Many performances were pre-taped and most of the parade’s performers were locally based to cut down on travel. The balloons were tethered to specialized vehicles instead of being controlled by handlers.