Can OscarsSoWhite Lead to Real Change in Hollywood? 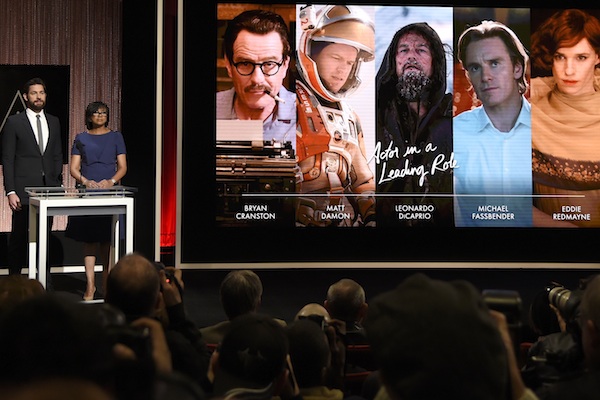 NEW YORK (AP) — The widespread outrage over two straight years of largely white Oscar nominees coalesced behind three damning, viral words: "OscarsSoWhite." The hashtag, which activist April Reign is credited with creating, lent social-media unity to a tide of frustration that on Friday led to diversity reforms announced by the Academy of Motion Pictures Arts and Sciences.

Like many others, Reign celebrated the announcement. But only for a moment.

"Although we are encouraged by today's news, change must still be made," says Reign, who still plans to rally viewers in boycotting the Feb. 28 broadcast. "The nominees are still the same as they were a week ago."

The actions announced Friday by academy president Cheryl Boone Isaacs following a unanimous vote by the academy's 51-member Board of Governors were by some measure an uncommonly quick reaction to the crisis that had enveloped the Academy Awards since nominations were announced eight days earlier.

But to many of those who have lobbied for change, the academy's announcement was seen as just a beginning: a first step in a growing movement for equal opportunity, on movie sets and award-show stages, in an industry that lags far behind matching the racial, ethnic and gender makeup of its moviegoing public.

"I applaud their attempts to do something about it," said Don Cheadle, who was nominated for best actor in 2005 for his performance in "Hotel Rwanda." ''But, again, this is dealing with the symptom, not starting at the root cause of how we even get to results like this, which has to do with inclusion and access and the ability for people of color, women and minorities to get at entry-level positions where you can become someone who can green-light a movie."

To infuse an overwhelming white, male and older academy with more diverse members who might be drawn to more varied nominees, the academy's Board of Governors voted to require that member voting status (previously a lifetime honor) be reviewed every 10 years; that the board add three new seats to be filled by Boone Isaacs; and that traditional member recruitment be expanded in a global campaign to boost diversity. The academy's goal is to double the number of women and minorities by 2020, though it hasn't disclosed its current demographic makeup.

Those reforms — which the academy boasted were "sweeping" and "historic" — were received by many as necessary updates for an institution that the Los Angeles Times in 2012 found is 94 percent white and 77 percent male. But most who cheered the move emphasized a longer, ongoing struggle.

Ava DuVernay, director of last year's best-picture nominee "Selma," called the academy's announcement "one good step in a long complicated journey for people of color and women artists." Chaz Ebert, publisher of RogerEbert.com and wife of the late critic, said, "The academy took the first step. Now let's have the studios, the production companies, agencies, unions and financiers follow suit for diversity." Cameron Bailey, the artistic director of the Toronto International Film Festival — where many Oscar campaigns are launched — praised the academy's "impressive, bold action," but added: "Studios, you're next."

Whether the academy can shift the focus onto the larger industry will be challenging. Thanks to the last two years of nominees, the Oscars have absorbed the lion's share of the spotlight on diversity.

Boone Isaacs, the academy's first African-American president, will also have to contend with the concerns of older members, whose academy membership will flip to "emeritus" status if they're no longer active in the industry at the time of their review. But "active" is an imprecise, potentially fraught term in a Hollywood where even the most successful players can go years without a project getting off the ground.

In an email to membership, Boone Isaacs sought to assure that even "emeritus" members will still receive annual for-your-consideration screeners from studios — usually seen as the most enviable perk of academy membership.

There is historical precedent for Boone Isaac's efforts to change the academy's membership. In the late 1960s, then-president Gregory Peck led a purge of older, inactive members in a bid to make the academy younger and more in touch with a changing culture.

This time, the academy is trying not just to reform itself, but to spur all of the movie industry to greater diversity. Boone Isaacs pointedly signaled that the academy's actions were not sufficient for Hollywood.

"The academy is going to lead," she said in a statement, "and not wait for the industry to catch up."