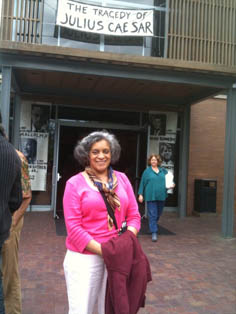 Trish Bradley, left, from Portland, says Julius Caesar was her favorite play during her visit to the Oregon Shakespeare Festival in Ashland last week, where she saw six plays in three days. She was delighted with Love's Labor's Lost, and the smash hit musical, The Pirates of Penzance, a musical performed on the outdoor theater stage, and directed by OSF's Artistic Director, Bill Rauch.

Both shows opened last weekend. She also enjoyed immensely Measure for Measure, (also directed by Rauch), The Imaginary Invalid and Love's Labor's Lost. Bradley is looking forward to returning to the festival to see The African Company Presents Richard III, which opens July 20.

For more information and a full listing of the plays being performed in Ashland's Oregon Shakespeare Festival, visit their website.

In discussing the season, Rauch noted, "This season celebrates the adventurous spirit of our company and our audience. In a nod toward my fifth year as artistic director, we have a record-breaking five new works: simultaneous looks at the 1960s in two American Revolutions world premieres, two wildly different adaptations of our namesake playwright's works, as well as a breathtaking new version of a global classic from one of our country's leading innovators. Two plays give us Shakespeare's own contradictory views on the nature of war and will play alongside his most exquisite tragedy and one of his most delightful comedies. Add into the mix a sublime new adaptation of a classic from our artistic director emerita and an outrageous vaudeville musical, and we have a season that we trust will leave you breathless with its daring variety."