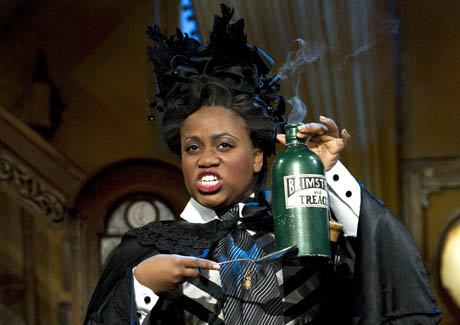 In an interview with The Skanner News this week, actress Q. Smith said she exults in her edgy role as Poppins' viscious nemesis, Miss Andrew (as well as two other parts, Queen Victoria and Miss Smythe). Producers of the rollicking musical describe it as "not just a fluffy copy of the movie."

Smith's past shows, most of which have toured, include "Les Miserables" on Broadway; and "Fame," "Smokey Joe's Cafe" (two productions, one starring Gladys Knight and the other with Rita Coolidge), "Aida," "Joseph and the Technicolor Dreamcoat," all off-Broadway; and more.

The Skanner News: Which was your favorite role?

Q. Smith: I love this role. If you're looking for the movie, you'll be able to see most of the movie in the show, but also most of the book is incorporated in our stage production of it. It's a combination of the book and the movie together.

It's very in your face, it'll bring you to a whole new level of appreciation for the movie.

I would say that the role of Miss Andrew is probably by far my favorite role ever. Also my favorite show ever was Les Miserables, I did that on Broadway.

TSN: One thing I'm going to be curious about is how this Portland audience will respond to – what is actually a more accurate portrayal of Victorian England – a lot of people don't think about African descendents there. Can you just talk a little bit about that? Did it throw you for a loop? Or do you really dig into it or what is your feeling about it?

QS: On two levels – I mean historically and artistically speaking, they're kind of two separate things. Because in Victorian England they didn't have slavery per se. Africans and people from different parts of the (Caribbean) Islands, they worked in London, you know what I mean? And they may have ended up as servants, but a lot of them were just free citizens. And a lot of people don't know that — that Europe was in the forefront of freedom for Africans and for Islanders. And so they had regular jobs like we do today. A lot of them did have power, a lot of them were wealthy, a lot of them just had a regular normal life.

But artistically speaking, it's very rare – I am the first African American to play a leading role in this show. If you look in London, or New York, Broadway, there hasn't been a principle character that's been African American. So this is a first for Disney, it's a first for me, and I'm so glad because that's kind if my plight in life – is to open doors to let people know we can do anything. Once the show starts you don't even think about 'what color is she? Where is she from?' People just want to listen to the story. So if we trust our audiences enough to understand the kind of story we're telling, they'll get over the color barrier quickly. Especially if you're doing a good job. And that's why I really want to encourage theaters and anyone in the arts – television, film, theater – to go forward and cast people according to their level of ability, not color.

And in "Mary Poppins," it doesn't matter. Our show is very colorful, you'll see people of all ages, all ethnicities, all types of people in our show. And it's so beautiful to bring your shows into this and see all the colors onstage because a lot of times, and particularly shows like the "Lion King" – no offense or anything like that — that are majority Black, it takes place in Africa. It's awesome for people to come and see our show with a wide variety of ethnicities, and I applaud Disney for that, because they do that often. It's wonderful for me and wonderful for the person who plays this part after me.

TSN: Who are your role models?

QS: Audra McDonald, she's won three or four Tonys now ( see Reader Comments below), she's an African American female who has done a variety of roles and who has crossed all kinds of barriers. An amazing, amazing woman and I will really need her in my book. I'm writing book about what we're speaking about, actually. She's inspired me. A woman named Viola Davis, has inspired me, she comes from the theater but now she has gone on to a life in film, she was nominated for an Oscar for "Doubt" (in 2008). She is a strong, amazing African American woman who is so wise, and so how she has conducted her career and conducted herself as an artist – you know we are artists, we are not just Black, we are not just one thing. We are many things. We don't just sing gospel music, we don't just rap – I don't even know how to rap. It's so amazing you just walk into a room to audition and before I started making my career people just assumed I was one thing. And so this opportunity to appear in "Mary Poppins" has given way for me to really show what I can do. Hopefully it will help others to understand that people can do anything if — you give them a chance to do it.

TSN: I was excited that Nikki James won a Tony on Sunday night (for Best Featured Actress in a Musical, in "The Book of Mormon").

QS: Yes, she's a friend of mine, I'm very excited for her and her career. I am so proud of her.

"Mary Poppins" runs at the Keller Auditorium from June 22 to July 10. For ticket information go to www.broadwayacrossamerica.com/portland/ , or call 503-241-1802.