Emmy Moments: Not the Pandemmys — but Hardly Normal, Either 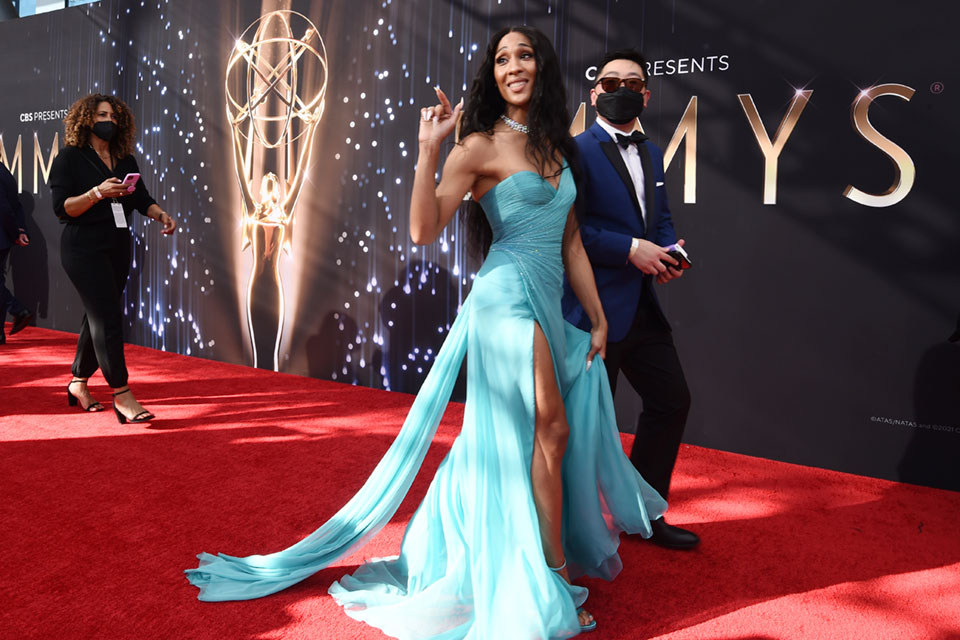 OK, it definitely wasn’t the Pandemmys, or the Zoomemmys, or whatever you want to call last year’s virtual Emmy ceremony — with everyone at home, and visitors in hazmat suits showing up to bestow awards.

This year was different — defiantly so. People were together, and not even in masks (except during commercial breaks.) There were plenty of hugs and kisses — in fact, quipped presenter Seth Rogen, he had just been sneezed in the face by Paul Bettany. (Guests had to present vaccine proof and negative COVID-19 tests.) 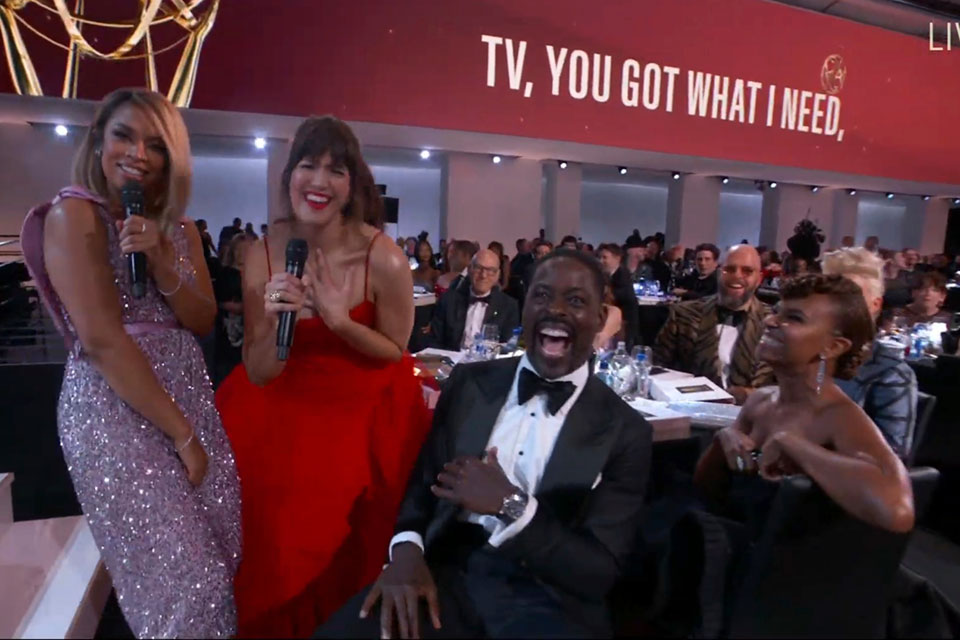 In this video grab issued Sunday, Sept. 19, 2021, by the Television Academy, Susan Kelechi Watson, left, and Mandy Moore, second from left, perform during the opening number of the Primetime Emmy Awards. (Television Academy via AP)

But of course, this wasn’t the PRE-COVID Emmys either. The crowd, in a tent in downtown Los Angeles, was much smaller than in normal years. And many overseas nominees couldn’t come due to travel restrictions — especially the cast and crew of “The Crown,” which accepted its six drama awards from a party in London, as “Schitt’s Creek” had done a year earlier in Canada.

And in a year where so much was different, there were some familiar problems. Awards were concentrated among a few shows. The hashtag #EmmysSoWhite emerged — a record number of nominees of color yielded only two Black winners, RuPaul for “RuPaul’s Drag Race” and Michaela Coel for writing “I May Destroy You.” A slew of Black actors were passed over.

Cedric the Entertainer proved an infectiously joyful and hard-working host, but the comedy bits were spotty at best. It also didn’t help that some overlong speeches dragged down the proceedings, for example from the director of “The Queen’s Gambit,” who was criticized on Twitter for a speech that to some, seemed to feel as long as a chess game.

Still there were feel-good moments: Debbie Allen. Jean Smart! Kate Winslet. Ted Lasso himself — heck, all Ted’s friends, too. And perhaps best of all, the fiercely original Coel, giving a stunning (and concise!) speech about writing.

Some key moments of the evening:

Yes, the expected Jeanaissance happened, with veteran Smart receiving a standing ovation after winning best actress in a comedy — her fourth Emmy in a long career — for playing a Las Vegas stand-up comic in “Hacks.” She immediately paid tearful tribute to her husband, Richard Gilliland, who died in March: “I would not be here without him, and without his … putting his career on the back burner so I could take advantage of all the wonderful opportunities I have had.” It was a theme -- personal loss -- that was threaded through a number of speeches. 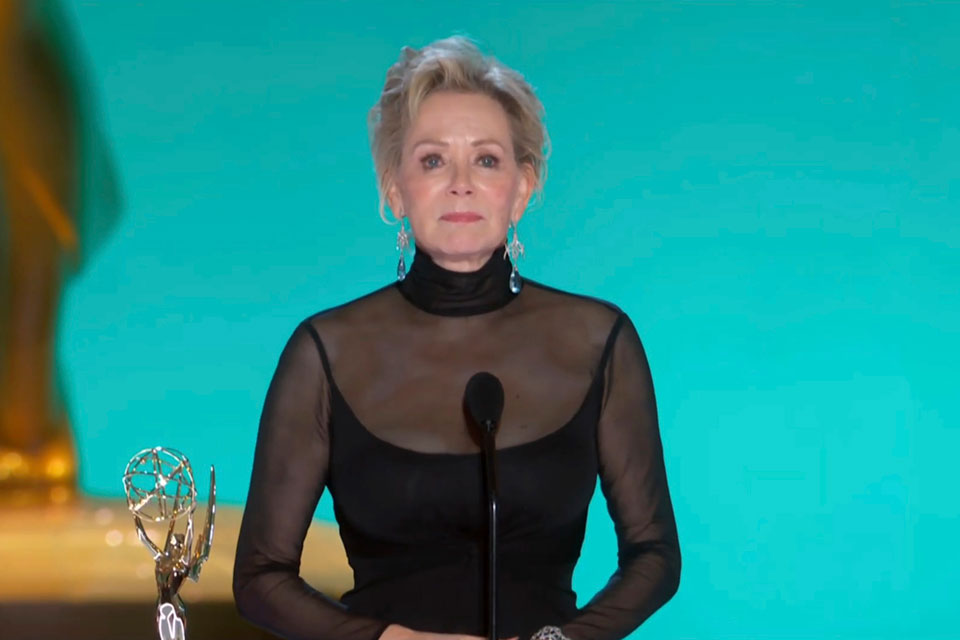 In this video grab issued Sunday, Sept. 19, 2021, by the Television Academy, Jean Smart accepts the award for outstanding lead actress in a comedy series for "Hacks" during the Primetime Emmy Awards. (Television Academy via AP)

And The Great Kate

While “Mare of Easttown,” also featuring Smart, lost out to “The Queen’s Gambit” for best limited series, it won three key acting awards, including the Great Kate — Winslet, of course — who captivated audiences with her role as a “a middle-aged, imperfect, flawed mother,” in her words, in which she also nailed a very difficult Philadelphia accent. The show “is this cultural moment, and it brought people together and gave them something to talk about other than a global pandemic,” Winslet noted. 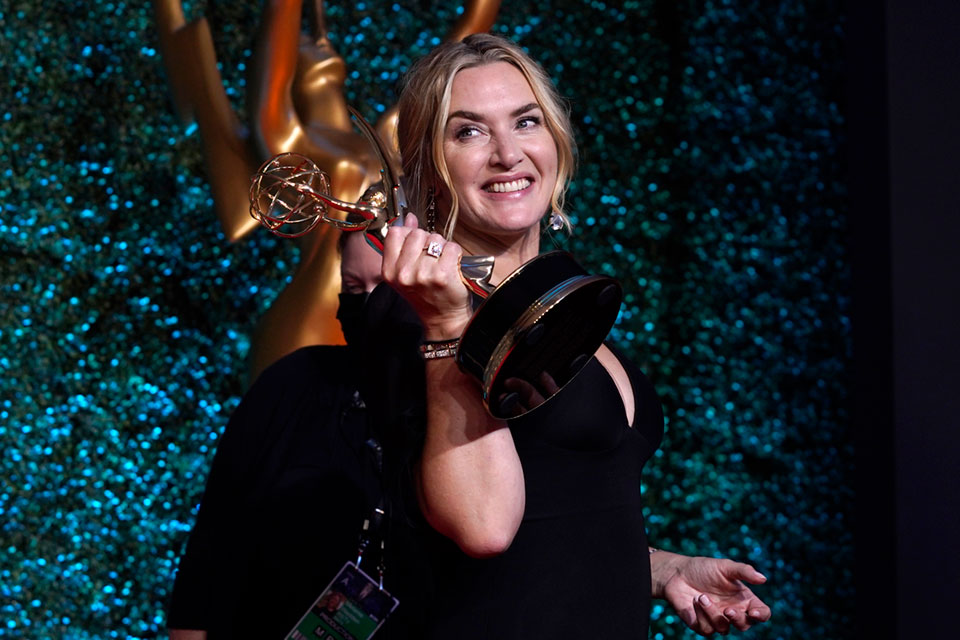 Kate Winslet, winner of the award for outstanding lead actress in a limited or anthology series or movie for "Mare of Easttown" poses at the 73rd Primetime Emmy Awards on Sunday, Sept. 19, 2021, at L.A. Live in Los Angeles. (AP Photo/Chris Pizzello)

It was unquestionably the feel-good show of the year, and “Ted Lasso” — about the unrelentingly upbeat American coach of a British football team — started winning early, with ebullient stage actress Hannah Waddingham accepting the award for best supporting actress in a comedy, closely followed by Brett Goldstein for supporting actor. Then Jason Sudeikis, the titular coach, made it a happy trio, winning best actor. “This show’s about families, this show’s about mentors and teachers, this show’s about teammates, and I wouldn’t be here without those three things in my life,” said Sudeikis. He told castmates and crew: “I’m only as good as you guys make me look.” The Apple TV+ show capped off the night by winning best comedy. 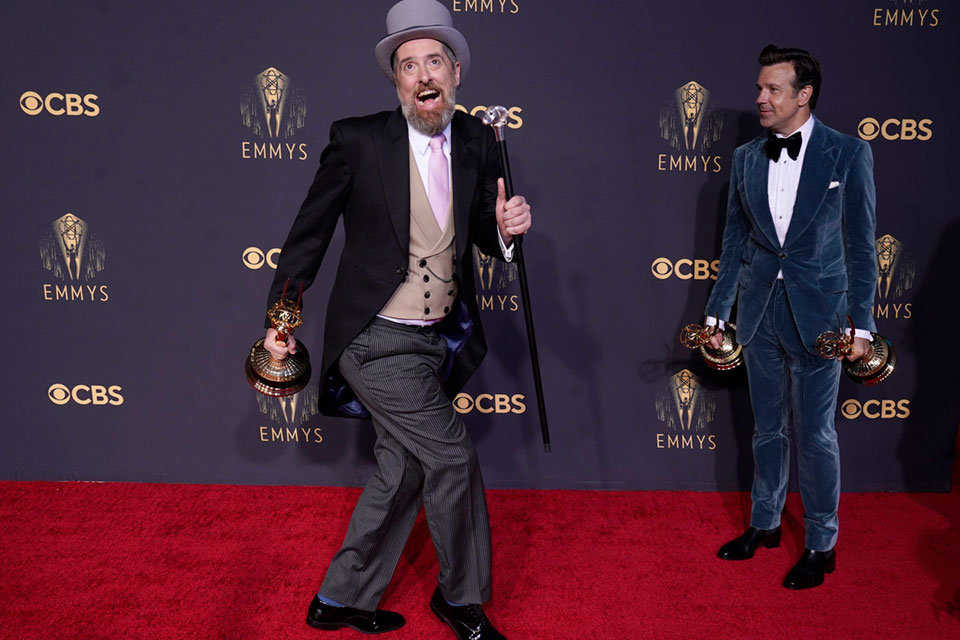 Brendan Hunt, left, and Jason Sudeikis pose with their awards for outstanding comedy series and outstanding lead actor in a comedy series for "Ted Lasso" at the 73rd Primetime Emmy Awards on Sunday, Sept. 19, 2021, at L.A. Live in Los Angeles. (AP Photo/Chris Pizzello)

“We’re going to party,” said Peter Morgan, creator of “The Crown,” as the royal saga from Netflix won drama writing, directing and all four acting honors. At times it seemed like that party — held in London due to travel restrictions — might be more fun than the long party in Los Angeles. Olivia Colman, who became the second actor to win for playing Queen Elizabeth II on the same show, after Claire Foy, was delighted but tearful as she recalled the death of her father during COVID. “He would have loved all of this,” she said.

There was not much politics in Emmy speeches, unless you counted Stephen Colbert riffing on the California governor recall attempt with a slightly labored joke about “The Marvelous Mrs. Maisel” being recalled. “Mrs. Maisel has survived the recall and will remain marvelous,” he concluded. But Cedric the Entertainer delivered some topical humor with a riff on vaccines. Likening the various jabs to stores, he called Pfizer the Neiman Marcus, Moderna the Macy’s, and Johnson & Johnson the TJ Maxx of vaccines. He also offered up a dig at Nicki Minaj for the story about her cousin’s friend in Trinidad. 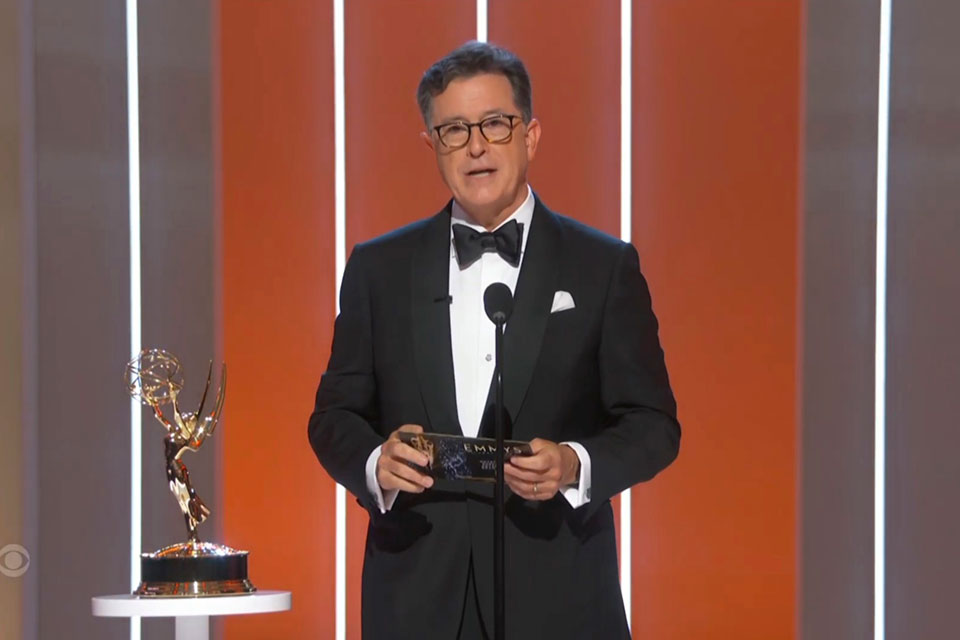 In this video grab issued Sunday, Sept. 19, 2021, by the Television Academy, Stephen Colbert presents the award for outstanding supporting actress in a drama series during the Primetime Emmy Awards. (Television Academy via AP)

Debbie Allen gets to stop the clock..

“Turn that clock off,” Allen said as she launched into her speech accepting the Governors Award. “I’m not paying any attention to it.” She added she was “trembling with gratitude and grace and trying not to cry ... it’s taken a lot of courage to be the only woman in the room most of the time.” She urged a younger generation to “Tell your stories … it’s your turn.” The crowd cheered — when you have her career as an actor, dancer, choreographer and activist, you’re allowed to ignore the playoff music. 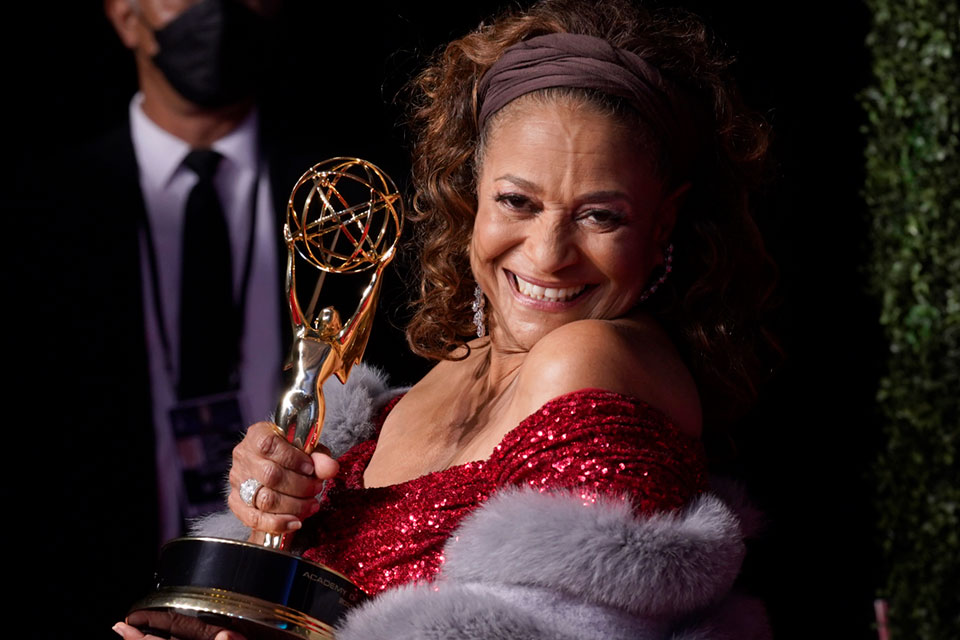 Not everyone is Debbie Allen

Then there was Scott Frank, director of “The Queen’s Gambit.” When he won, he thanked some folks, then more, then more, reading from a prepared speech.. The playoff music swelled, several times, but he continued, saying at one point: “Really?” Frank was called out on Twitter. “This is why directors need editors,” wrote writer-producer Danny Zuker, calling the remarks “The Irishman” of speeches. 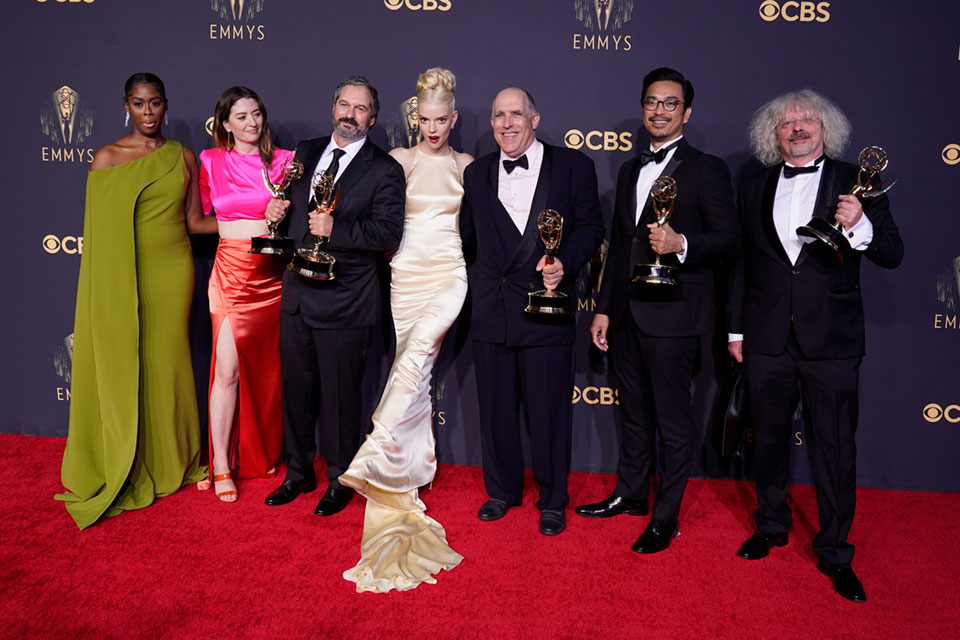 A writer, on writing

Luckily, what followed was probably the night’s highlight — the remarks by Coel, of “I May Destroy You.” She said she had something to tell the writers out there. “Write the tale that scares you, that makes you feel uncertain, that isn’t comfortable,” she said. “I dare you.” In a world, she added, where we all feel the need to be visible, equating it with success, “do not be afraid to disappear … See what comes to you in the silence.” Coel dedicated her show, in which she played a survivor of sexual assault, “to every single survivor of sexual assault.” 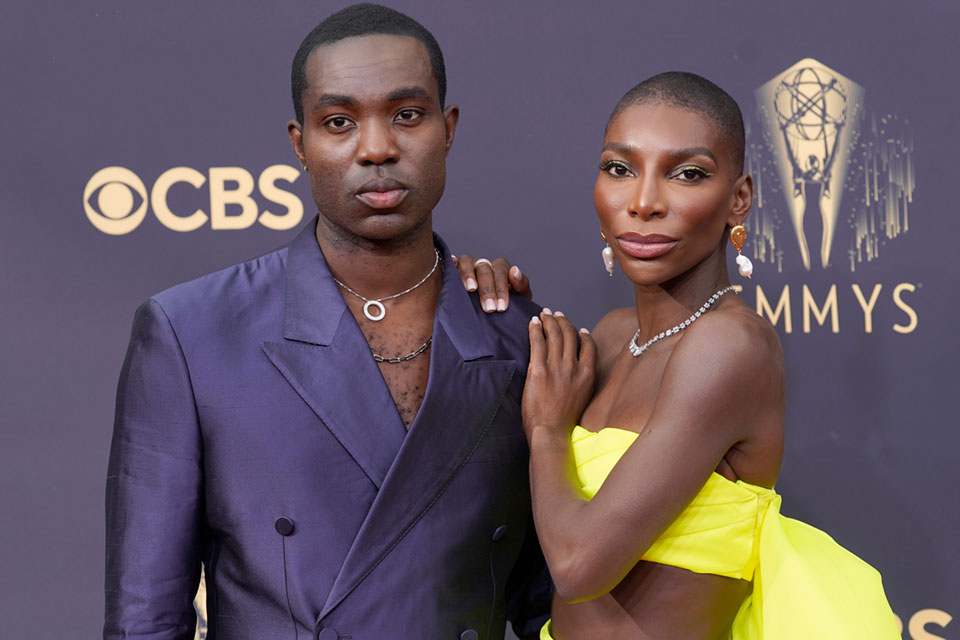