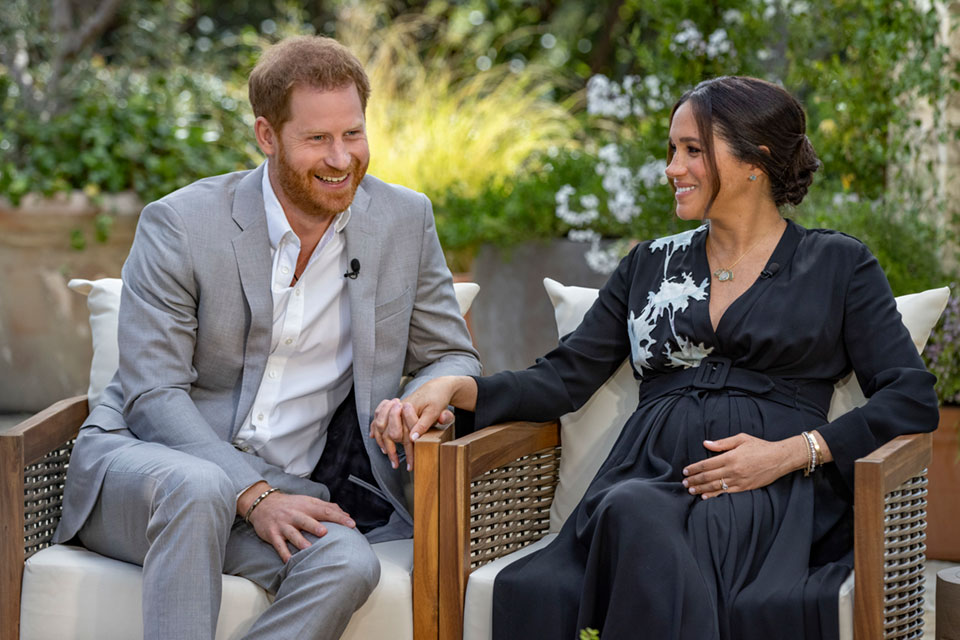 LONDON (AP) — Britain and its royal family absorbed the tremors Monday from a sensational television interview with Prince Harry and Meghan, in which the couple said they encountered racist attitudes and a lack of support that drove the duchess to thoughts of suicide.

In a two-hour soul-baring interview by Oprah Winfrey, the couple painted a deeply unflattering picture of life inside the royal household, depicting a cold, uncaring institution that they had to flee to save their lives.

Meghan told Winfrey that at one point “I just didn’t want to be alive anymore.”

She said she sought help through the palace’s human resources department but was told there was nothing it could do.

Meghan, 39, admitted that she was naive at the start of her relationship with Harry and unprepared for the strictures of royal life.

The former television star, who is biracial, said that when she was pregnant with son, Archie, there were “concerns and conversations about how dark his skin might be when he’s born.”

Harry confirmed the conversation, saying: “I was a bit shocked.” He said he would not reveal who made the comment, though Winfrey said he told her it was not either of his grandparents, Queen Elizabeth II or her husband, Prince Philip. 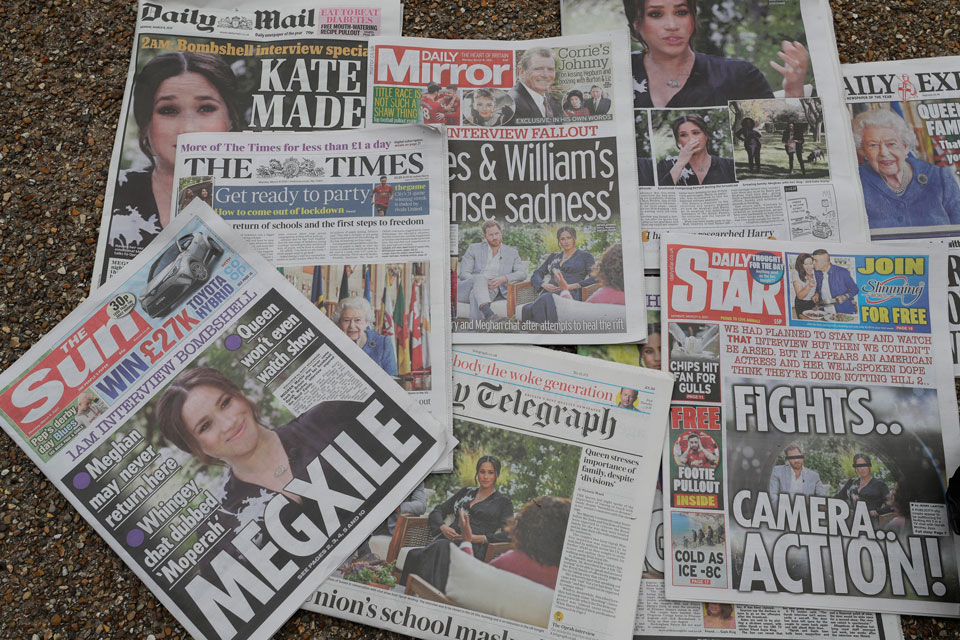 Newspapers are placed on the ground placed by a television crew in front of Buckingham Palace in London, Monday, March 8, 2021. Britain's royal family is absorbing the tremors from a sensational television interview by Prince Harry and the Duchess of Sussex, in which the couple said they encountered racist attitudes and a lack of support that drove Meghan to thoughts of suicide. (AP Photo/Kirsty Wigglesworth)Harry and Meghan, known as the Duke and Duchess of Sussex, announced they were quitting royal duties last year, citing what they said were the unbearable intrusions and racist attitudes of the British media, and moved to North America. That split became official this year, and the interview was widely seen as their first opportunity to explain their decision.

In a clip released Monday that was not broadcast the night before, Harry reiterated that racism was “a large part” of the reason the couple left Britain — and he blamed the “toxic” British tabloid press.

“The U.K. is not bigoted,” he said. “The U.K. press is bigoted, specifically the tabloids.”

The implications for the interview — which was broadcast Sunday night in the United States and will air in Britain on Monday night — are only beginning to be understood. Emily Nash, royal editor at Hello! Magazine, said the revelations had left her and many other viewers “shell-shocked.”

“I don’t see how the palace can ignore these allegations, they’re incredibly serious,” she said.

“You have the racism allegations. Then you also have the claim that Meghan was not supported, and she sought help even from the HR team within the household and was told that she couldn’t seek help.”

Anti-monarchy group Republic said the interview gave a clearer picture of what the royal family is like — and it’s not pretty.

Harry, born a royal prince, described how his wife’s experience had helped him realize how he and he rest of the family were stuck in an oppressive institution.

The younger royals — including Harry, Meghan, Harry's brother, Prince William, and William’s wife, Catherine — have made campaigning for support and awareness around mental health one of their priorities. But Harry said the royal family was completely unable to offer that support to its own members.

“For the family, they very much have this mentality of ‘This is just how it is, this is how it’s meant to be, you can’t change it, we’ve all been through it,’” Harry said.

The couple had faced severe criticism in the United Kingdom before the interview. Prince Philip, 99, is in a London hospital after recovering from a heart procedure, and critics saw the decision to go forward as being a burden on the queen — even though CBS, rather than Harry and Meghan, dictated the timing of the broadcast.

In the United States, sympathy for the couple poured in after the interview. Britain could be less forgiving, since some see the pair as putting personal happiness ahead of public duty.

Tennis star Serena Williams, a friend who attended Harry and Meghan’s wedding, said on Twitter that the duchess’s words “illustrate the pain and cruelty she’s experienced.”

“The mental health consequences of systemic oppression and victimization are devastating, isolating and all too often lethal,” Williams added.

Meghan — then known as Meghan Markle, who had starred on the American TV legal drama “Suits” — married Harry at Windsor Castle in May 2018.

But even that was not what it seemed: The couple revealed in the interview that they exchanged vows in front of Archbishop of Canterbury Justin Welby three days before their spectacular wedding ceremony at the castle.

Archie was born the following year and in a rare positive moment in the interview, the couple revealed their second child, due in the summer, would be a girl.

Harry said he had lived in fear of a repeat of the fate of his mother, Princess Diana, who was covered constantly by the press and died in a car crash in Paris in 1997 while being pursued by paparazzi.

“What I was seeing was history repeating itself, but definitely far more dangerous — because then you add race in, and you add social media in,” Harry said.

Both Meghan and Harry praised the support they had received from the monarch.

“The queen has always been wonderful to me,” Meghan said.

But Harry revealed he currently has a poor relationship with William and said things got so bad with his father that at one point Prince Charles stopped taking his calls.

“There is a lot to work through there,” Harry said about his relationship with his father. “I feel really let down. He’s been through something similar. He knows what pain feels like. And Archie is his grandson. I will always love him, but there is a lot of hurt that has happened.”

While clips of the interview have been shared online, and the British press covered the major points, much of Britain won’t see the full interview until Monday night — and many will want to know how the palace addresses this saga. The palace has not responded to the interview.

The royal family has known scandal before — most recently over Prince Andrew’s friendship with convicted sex offender Jeffrey Epstein. That led Andrew, Harry’s uncle, to being sidelined from royal duties.

“I’m very sad for the queen,'' said Ernest Lee, 76, when questioned in London. “I think she has a lot of problems at the moment, what with one of her sons (Andrew) and scandals and now her grandson busting up, pulling away from the royal family. ... We have enough problems in this world without people making more.”

If you or someone you know is having suicidal thoughts, you can seek help from the National Suicide Prevention Lifeline in the United States on 1-800-273-8255. The Samaritans in the United Kingdom can be reached on 116 123.