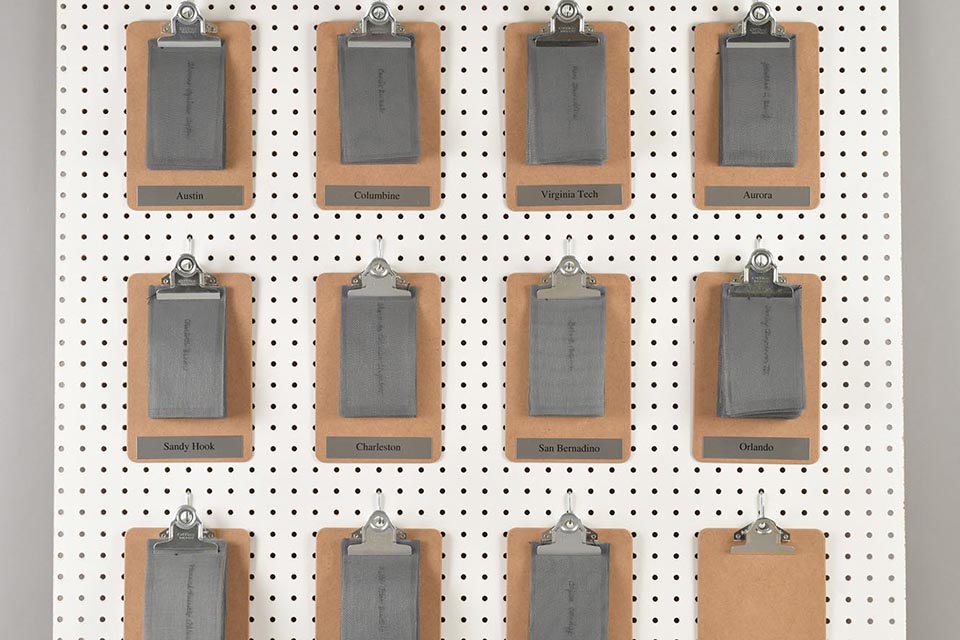 "Smoke Screen," a mixed-media installation created to commemorate those who have died in large-scale gun violence, is on show through June 30 at North Portland Library.

In 2017, in Las Vegas, 58 people died and 422 were wounded, yet a year later NPR commented it is tragic "there was little political will to address this issue.”  To Portland artist Bonnie Halfpenny it seems that with each subsequent mass shooting, the nation only listed the names of victims, mourned the  losses, but then only carried on until we have still another tragedy.

Halfpenny felt moved to created an art piece to make the statement that society is beginning to treat each tragedy as just one more daily event.

The vision came to her that these matters are being dealt with as impersonally as filing business receipts, or they are like job tickets on a clipboard in a workshop.

She felt drawn to record the names of the victims, using free-motion stitching on a sewing machine, to make a book with one name to a page. She compiled 11 books, each representing a different shooting event, and a 12th book to represent the repeats sure to come.

To emphasize the lack of human sympathy she made the pages like industrial mesh, metallic grey; the names transparent and veiled as if by smoke screens, and the "books" brutal clipboards hung impersonally on a pegboard.

But by complete contrast, to make sure the names will not fade away from us, Halfpenny had every name in the books read out in a recording studio and made to play endlessly, like a tape loop, beside the visual artwork.

"We can't bring them back," she said, "but by giving witness that we care, we become a stronger community."

"Smoke Screen” is a mixed-media creation on display now at the North Portland Library, 512 N. Killingsworth Street. It is in the second-floor meeting room, but call ahead for library hours and room availability.