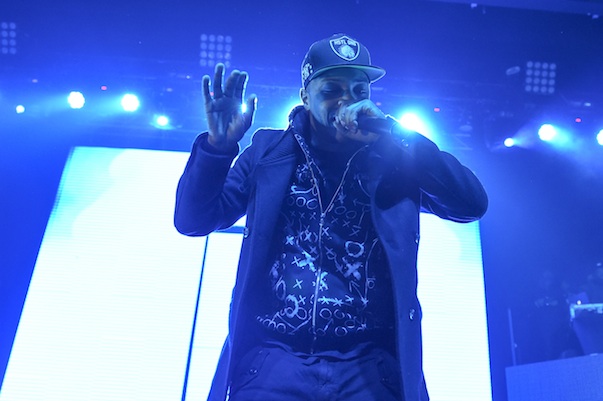 NEW YORK (AP) — Fists were flying and then bullets inside a crowded New York City concert venue where four people were shot, one fatally, and now a rapper who police say was seen on surveillance footage firing a gun is facing attempted murder and weapons charges.

Roland Collins, who goes by the stage name Troy Ave, was arrested Thursday, a day after the deadly shooting at Irving Plaza, where hip-hop artist T.I. was set to perform. Police said a fistfight had broken out in a performers' lounge at the venue.

The man who died, 33-year-old Ronald McPhatter, was a member of Collins' entourage and had been there to provide security, according to his family. Collins, 30, suffered a gunshot wound to the leg, police said.

An 8-second video clip released by police shows the gunman bursting through the door of a VIP room in apparent pursuit of another man, who flees off-screen.

As concertgoers huddle under a counter and clutch each other, the gunman, who appears to be limping, stops and scans the room for a moment with his eyes. Then, he spots something, raises his gun and fires.

"Everyone was hysterical, I was having a panic attack during the shooting, and the woman next to me was covering my mouth with her hand to try to get me to stop screaming," said Liv Hoffman, 19.

There were nearly 1,000 people in the venue when the shooting began. One of the victims, Christopher Vinson, 34, was shot in the chest on the venue's ground level after a bullet traveled through the floor, Chief of Detectives Robert Boyce said. Another bystander,

Maggie Heckstall, 26, was shot in the leg, authorities said.

The exact circumstances of what prompted the fight were still under investigation.

In an interview with WCBS radio, Police Commissioner William Bratton blamed the shootings on "the crazy world of the so-called rap artists who are basically thugs that basically celebrate the violence that they live all their lives."

That prompted an angry response from McPhatter's relatives and a city lawmaker, who derided the comments as insensitive and divisive.

"When white people are doing this violence, I don't hear the same language being used," said City Councilman Jumaane Williams, a Brooklyn Democrat who said he had worked on anti-violence initiatives with McPhatter and his older brother, Shanduke McPhatter, a former gang member.

Collins was in custody and couldn't be reached for comment Thursday. It was unclear if he had an attorney. A message left at a phone number listed for him wasn't immediately returned.

Shanduke McPhatter said his brother "got too much into" the glamour of the hip-hop scene, and it landed him Wednesday night in an environment where alcohol flowed freely and trouble broke out.
___
Associated Press writers Kiley Armstrong, Tom McElroy, Mesfin Fekadu, Jennifer Peltz and Michael Balsamo contributed to this report.