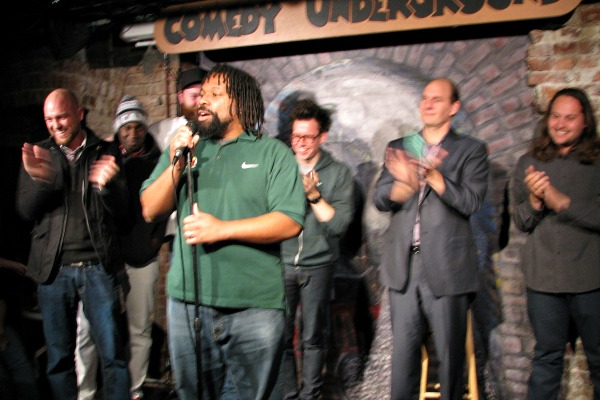 Portland comedian Nathan Brannon has had a busy year. He made a comedy album through Voodoo Doughnut Recordings, he was chosen to audition for NBC’s “Last Comic Standing” and opened for headliner Dave Chappelle.

Most recently he won the 35th Annual Seattle International Comedy Competition. He beat out 700 applicants to win a $5,000 cash prize and a recording contract with Uproar Records and David Drozen.

As Brannon gears up to perform in the local Bridgetown Comedy Festival, he shared his thoughts with The Skanner News. He described the Seattle competition, his challenges with being a Black comedian in the Pacific Northwest and his plans for the future.

The Skanner News: Congratulations on your recent win, what was the competition like?

Nathan Brannon: Thank you very much! It was a great experience. I didn't think I would be tested, as a comedian, nearly as much as I was during it. It was a month long - 18 different venues - night after night, with some very stiff competition from all over the world.

Mentally, it was one grueling test after another. The first night of the finals was the same night that Darren Wilson was acquitted in the killing of Mike Brown. If that didn’t make it hard enough to tell jokes that night, the tense feeling of competition was palpable. It just so happened that on this particular night, the competition took place at an upscale athletic club in downtown Seattle. The audience was pretty much what you would expect them to be; fairly well off, middle aged, white, etc. They hated me. I finished dead-last that night. In the middle of my set, I actually heard a woman proclaim loudly "He's not funny!"

After the show I walked out onto the street to see it flooded with protesters clashing with the Seattle Police Department. That's when the real low of the night hit me: while I was up in a high-rise entertaining wealthy people, people that looked like me were hurting because of the murder of someone who looked like me.

To say I was ashamed would have been an understatement. That night I questioned myself as a comedian, and as a person. I was ready to quit the whole thing and head home. But, if I would have done that the story would have just ended there with nothing to show for it. I wouldn't have experienced the awesome theaters or the amazing crowds we got to perform in following that night. It was all a great lesson in perseverance, which is critical in this line of work.

No matter how tough the surrounding situation, it is ultimately you that determines how you finish. That night I stayed up and wrote some of the most honest, vulnerable material I’ve ever written, which will now be on my next album. I'm a much better comedian because of that night and the competition as a whole.

TSN: What made you want to go into comedy?

NB: I have always been interested in how versatile comedy can be; laughter is just the surface. With a joke, you can present a new way of thinking, share experiences across groups that never hang out, spark social action, or just mentally take people away from terrible situations, and I love that. I like to put stuff out there, see how audiences react to it and try to figure out why they reacted that way.

TSN: Your comedic style seems conversational yet spiced with absurd elements, what mood do you try to strike?

NB: I don’t know if I try to strike a particular mood. I just try to be as honest in my stuff and try to get everyone to see where I'm coming from, and often that helps me see where audiences are coming from as well. Sometimes, I’m just thinking of weird stuff, and want to see if anyone else is thinking of it as well, to keep myself sane.

TSN: You describe yourself as an Ethnic Unicorn. What is it like being a Black comedian in Portland?

NB: Honestly, when I first started here, it was very difficult. Back in the day ('07/'08) my mentor ran the only comedy rooms in Portland that had predominately Black audiences, the rest were predominantly white, so I had to learn to do both. There was always an unspoken assumption in the air; “you either perform for this group or that group, it's wasted energy to try and appeal to both.”

A lot of times, the things I wanted to talk about on stage weren't what audiences expected me to talk about and I think it may have come off as disingenuous to them, so they tuned out on me a lot. That's the worst, when all you want as a comedian is for people to listen.

TSN: What happens next for you?

NB: The future seems really exciting right now. In the past couple months, I have had a ton of auditions for sitcoms, which is a completely new experience for me. Keep the fingers crossed.

Also, after winning the competition, I was offered a recording contract for my next album so I’m working on that right now. I want this one to have a little more “teeth” than my last album, and take on issues that I’ve held back from in the past. I’m looking forward to it and expect to record it by the end of the year.

More than all that, I just became the father of a beautiful baby boy! So keep a look out for some absurd baby jokes!

Watch a clip of Nathan performing a set.