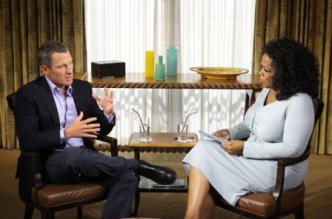 If Oprah Winfrey were a close friend and you had a secret to tell, she'd be an obvious choice to go to for some relief.

Not necessarily because she wouldn't broadcast it, but because she'd probably hold your hand, ease the tension, listen sympathetically and not make you feel too bad about yourself if the secret's more like a skeleton. You both might even shed a few tears.

In essence, this is the persona that Winfrey has crafted over the years as she's moved from newcomer host on "AM Chicago," to the queen of daytime TV with "The Oprah Winfrey Show," to the current chief executive officer of OWN, the Oprah Winfrey Network. She's relatable, but still inspiring; candid without being crass; and about as vulnerable as a billionaire media titan can be.

"One of Oprah's major products is redemption," Kathryn Lofton, a professor of religious and American studies at Yale University, told The Globe and Mail. "She sold the experience of confession -- of hearing somebody's darkest story, and offering to them the possibility of relief from its articulation."

As a result, Winfrey has inspired her fair share of televised confessions, from everyday guests to high-profile names. If you need to come clean and find a new path, Winfrey's the one to show you how to do it.

Disgraced cyclist Lance Armstrong is the latest celebrity to sit down with Winfrey for a "no-holds-barred" two-part chat set to begin airing on her network Thursday night.

In the pre-taped "Oprah's Next Chapter" interview, Armstrong is expected to admit to using performance-enhancing substances during his heralded career -- a sharp about-face after he steadfastly denied doping allegations. Stripped of his seven Tour de France titles and banned from the sport, Armstrong is not only facing a mountainous public relations hurdle, but also possible legal ramifications.

While Winfrey has said she's never had an interview this big in terms of exposure, she does have a reputation as a go-to for the celebrity confessional interview. In the past, we've seen notable guests drop by "Oprah" when they needed to get something off their chests, address missteps, overhaul their images, or all of the above.

After a video appeared to catch Sarah Ferguson, the Duchess of York, getting money for access to her ex-husband, Ferguson went to Winfrey. Ellen DeGeneres was sure to hit the "Oprah" show when she made the decision to come out in 1997. DeGeneres even invited Winfrey for a cameo appearance on her prime-time comedy, "Ellen."

There was also former track and field star Marion Jones' post-prison talk with Winfrey in 2008 -- memorable for the athlete's tears -- and Whitney Houston's frank and at turns unsettling discussion of drug use with Winfrey in 2009.

"Oprah is known for giving the interviewee fair time and creating a relaxed environment," Sean Cassidy, president of public relations firm DKC, said via e-mail of Winfrey's draw. "She gives the subject a lot of rope and room to talk."

These sit-downs don't always yield the answers the audience is looking for, but Winfrey has a knack for creating a rapport with her guests that makes it, at the very least, a riveting watch. (Exhibit A: Tom Cruise getting so comfortable with Winfrey that he thought it was OK to jump on her couch while professing his love for Katie Holmes.)

For example, David Letterman opened up to Winfrey last week about suffering from depression and the 2009 scandal he caused when he admitted to sleeping with staffers on his late night show. "I have no one to blame but myself," Letterman told Winfrey, expressing the kind of self-reflection viewers at home want to see.

"In Letterman's case -- and certainly with Lance Armstrong -- she is probing very uncomfortable, damaging and embarrassing behavior," Cassidy continued. "Individuals facing these situations are uncomfortable with a rapid-fire line of questioning -- they shut down, act stiff or stick to a script. Oprah is able to create an atmosphere that is conducive to these types of uncomfortable interviews."

Part of that could be because of her brand's emphasis on renewal and transformation, with some of her content instructing participants on how to repair past damage to move forward and clear room for one's "best life."

"This idea of the confessional as a way of apologizing, as a way of transforming yourself ... and mak(ing) things better is something that Oprah really banks on," said Catherine Squires, the Cowles professor of journalism, diversity and equality at the University of Minnesota. "All of the celebrity advice people that she's spawned like Dr. Phil and Dr. Oz, it's all about saying you take personal responsibility for yourself, and focusing on this idea that everyone has to figure out some magic formula to make themselves a better person."

Indeed, the best outcome for anyone walking through Winfrey's confession session would be the opportunity to hit the restart button -- a goal that may have factored into Armstrong's choice to come forward now and talk to Winfrey.

In an interview with "CBS This Morning" on Tuesday, not even Winfrey could say definitively why Armstrong decided at this point to come forward, but she did say it was a difficult interview and that Armstrong "brought it." That euphemism may not have satisfied the skeptical, however, who have pointed out that talking with Armstrong about his transgressions wouldn't be the same as exploring a slip-up by a pop star.

"The major criticism with her interviews is that she's a soft-baller," said TVGuide.com staff editor Joyce Eng. "When it came out that Lance was going to do this interview, it was like, 'Of course,' because she's not going to be hard-hitting with him. You watch 'Oprah's Next Chapter,' and Rihanna's crying on it. There's that expectation that she's going to go a little easy on him."

Winfrey herself has said that she prepared for this interview as if it were a college exam, and walked into it with 112 questions to ask -- although she didn't get to all of them.

But perhaps Winfrey's CBS interview was the most interesting confession of all in this scenario, suggested the University of Minnesota's Squires. After all, it can't be ignored what a great opportunity this is for the media mogul to expose -- and, really, just help viewers find -- her new cable network.

"The fact that she did interviews about getting the Armstrong interview is interesting. ... When she had her own daytime show, she wouldn't need to do any pre-press or pre-publicity, because everybody would know that Lance Armstrong was going to be on 'Oprah,'" Squires said.

"Her network does not get the viewership that her show got, so for her to get the Lance Armstrong interview is as much about proving she has still has it as anything about whether Armstrong is going to be forgiven by the public, or get a 'get out of jail free' card from the people who are investigating him."