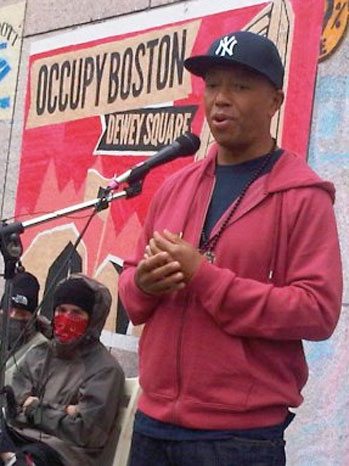 Russell Simmons was among the handful of celebrities making a daily show of support of Occupy Wall Street (OWS) via a very visible presence on the ground in lower Manhattan and other cities. But since the police began banning and bulldozing the group's campsites all across the country, it seems that the activists might have lost some of their momentum. So, I decided to track down Russell to see whether he thinks OWS was just a flash in the pan or if it will be revived despite the recent crackdown.

Kam Williams: Hey Russell, thanks for the time.

KW: Why did you join the Occupy Wall Street Movement?

RS: Well, I have certainly been one of the people who have been very vocal about the government's being more concerned about special interests than the needs of the people who elected the officials. There's always been talk about this, and now we have a chance to have a real dialogue. Wall Street controlled the future of the people participating in the occupation. A lot of pundits keep asking, "What do they want?" It's so clear to me what the protesters' rap is all about. They're occupying Wall Street and carrying picket signs that say things like, "I couldn't afford a politician, so I made this sign." You can trace their grievances and discontent back to all the corporate influence which has had a huge impact in terms of all the inequalities that people are suffering from. If you talk about the prison-industrial complex, I've fought against the prison-industrial complex when I called for a repeal of the Rockefeller drug laws. The biggest impediment to get the laws changed was the lobbyists. Whether you're talking about healthcare, jobs going overseas, or tax reform, you're always coming up against lobbyists. Hello! So that issue is critical. And this dialogue is bringing a lot more attention to it.

KW: But are the politicians listening to OWS or to the lobbyists?

RS: The politicians already in office don't want to change. A few might have it in their hearts to change and to start working for the people, but even some of the most progressive politicians are silent because they know that the candidate with the most money wins.

KW: So, what's the solution?

RS: On the day that Mayor Bloomberg cleared out Zuccotti Park in New York, I went up to Boston where I promoted a Constitutional amendment calling for public financing of elections, a very straightforward, no-nonsense, no compromise amendment which prohibits any expenditures by any third party, by any special interests or even by the candidates themselves.

KW: That would certainly level the playing field.

RS: Yeah, the elected officials should be working for the voters who elected them. Money corrupts the process. Why would you be giving a candidate money unless you expect something in return? That's why I want to get this amendment done. It's only four lines long. This is not a partisan idea. It's an American idea. We're trying to make a true democracy.

KW: Do you think the Occupy Wall Street Movement has been hurt by getting kicked out of park after park around the country?

RS: No, no, no… I think it's only made it stronger. The movement's just beginning. It's only a couple months old. I was at Zuccotti Park almost every day. The kids down there were very compassionate. They embraced the homeless, and they were even kind enough to give free food and tents to inmates just being released from Riker's Island. And some of those people would come out of jail and find purpose in joining the movement. Unfortunately, a few were disruptive, and the media would give the bad apples the most attention and so OWS' message was being misrepresented. But OWS was only taking care of people the City of New York should've been caring for. So, the cleaning out of the parks just means the revolution has to evolve.

KW: What would your answer be to people who ask: What, specifically, does Occupy Wall Street want?

RS: We want the government to be controlled by all the people, not by the richest 1%. That's always been the first demand. That's a simple enough message, and I think it's pretty clear now, even though much of the media has been disingenuous in its coverage. We don't want the heads of the biggest industries to make all the decisions, because they're not for the people. They're for the corporations. Power to the people!

KW: How will eliminating political contributions help the election process?

RS: Presently, you can't be a free man and run for office in this country. Everybody wants something! Even individuals who bundle your money want something. The system has to be changed so that the politicians will work on behalf of the people.

KW: Isn't it possible that you'll still have politicians taking money under the table?

RS: That's a different type of corruption. Most people don't want to break the law. I'm concerned about eliminating perfectly legal forms of bribery. At least 4 out 5 Americans believe that Wall Street and special interests have too much control over our government. So, it's not just a progressive thing. Remember, even a whole unit of Tea Party members marched with us on the Brooklyn Bridge.  They want their elected officials to work for them, too. We see a flaw in our democracy, and there's no reason why we shouldn't be able to fix it. We want to educate people on this one issue.

RS: All of those problems are what makes this so urgent. And at the same time, the stock market just rolls on. It's a disconnect, a money grab. Things will change when they can no longer exploit the people.

KW: So, isn't business to blame for these problems more than politicians?

RS: No, I don't fault business. If you run a corporation, your job is to maximize the return on investment for your investors. Good for you. But by the same token, we have to remember that corporations have no compassion. That's why legislation and regulations are necessary.

RS: Definitely! Veteran activist Dr. Ben Chavis is coming aboard with his long history and great record in terms of organizing. I know that when the civil rights community joins forces with the unions and with the pop stars of the cultural community; we can make this country much greater.

KW: Are you at all worried about a possible backlash from the black community the way that Dr. Cornel West and Tavis Smiley were criticized as being anti-Obama when they went on their poverty tour?

RS: No, this not about Obama. I'm prepared to go on the road to make sure that Obama gets reelected. I'm a big supporter of President Obama.

KW: And what's up next for Occupy Wall Street?

RS: There's going to be an announcement made very shortly. I can't blow it, but I will say this much: I potentially see the unions, the black Church and the cultural community coming together to spearhead a Poor People's Revolution as a fulfillment of the dream envisioned by Dr. Martin Luther King.

KW: Well, thanks for updating me, Russell, and best of luck with expanding the Occupy Wall Street Movement.