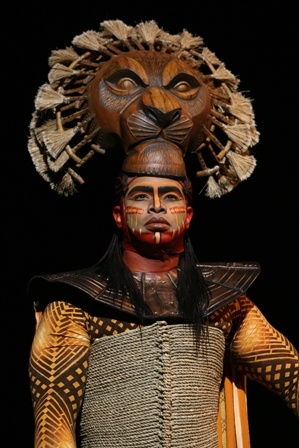 One of the most-anticipated shows in the Broadway Across America roster has opened in Portland: "The Lion King." The show drew a standing ovation from its sold-out crowd last Friday on opening night.

We spoke with actor Dionne Randolph, who plays Samba's father, Mufasa. Originally from Gainesville, Ga., Randolph has performed in Disney versions of the Lion King since the first incarnations hit the stage in the 1990s. He has also played Actors Equity roles in regional theater productions of "Smokey Joe's Café," (as Fred); "Little Shop of Horrors," (he played the voice of the monster, Audrey II);"Once on this Island" (as Awe); and various shows at Walt Disney World.


The Skanner News: I was reading an article about you in this role and about how you've actually been performing The Lion King in different ways for years. Can you talk about your feelings for Mufasa?

Dionne Randolph: I say that when I met Tom Schumacher – of course Disney is still hands-on in this musical which is why it's such a pleasure to still be here after all these years – but Tom Schumacher of course is the president of Disney Theatrical but he was also the person who brought the idea of the movie the Lion King to Disney. He's been a producer with Disney for years and so it was his idea to create to story about a young cub coming of age, set in Africa. So many years ago, and to think that because of his one idea, 20 years ago, I have been working professionally in the business now in my 15th year. The first show I originally did was the Magic Kingdom, and in Florida in Disney World the show opened, "The Legend of the Lion King," in June of 1994, which was when the movie came out. It was a puppet show, beautiful puppets, I remember the adult Simba, he took about eight puppeteers to operate. And there was a Pride Rock, and they mixed the stampede with a projection and puppeteers – it was a really extravagant 20 minute show is actually what it was. I remember at the time I said, if this show ever goes to Broadway I am going to be in it. Then that show left, and I went and did some regional shows after that, a couple of cruise ships, and then a festival of "The Lion King" opened at the Animal Kingdom in 1998. I went back to Disney and did that for a couple of years, and then left and did some more regional shows, and then I auditioned for this and got it in 2003.
So I have been connected to this show for some time now.

TSN: And the amazing thing for Portland audiences is that it's a coming of age story but it's really about fathers and sons, and it's opening in Portland on Father's Day weekend.

DR: People always ask, what's it like being in a show like that, and I say well, I'm America's number one dad, and it can't be any better than that. So it's really cool that we are opening on that weekend here. But the biggest thing about "The Lion King" -- some other shows are really nice shows and you sing the songs and you leave the theater. But there's something really unique about "The Lion King," is that people actually cry through this show, people actually feel something. I've seen a couple of shows recently where I've thought, that was great but I never really felt anything in it. This show is very unique in that aspect. Not only is it about the connection between father and son, it's about family, it's about life, it's about death, it's about love – it's about very simple things that we all go through and can relate to, in the spectacle storytelling of "The Lion King." So I've always said my favorite moments in the show are those quiet moments, away from the Circle of Life, which is spectacular to see. The quiet moments with Mufasa and Simba, Mufasa teaching Simba lessons under the stars, or Nala when she gets banished in Act Two, a very quiet moment with her and a song with the lionesses, these are always my most moving moments in the show because in this show you feel as opposed to just see.

DR: I am not a dad yet. I have no time, I've been traveling seven years. I hit a town and leave, hit a town and leave, and go home for two weeks a year. It's kind of hard. But I'm very close to my own father, and I incorporate a lot of the things he's taught me in the role of Mufasa. My dad is a great guy.


The Lion King is at the Keller Auditorium June 16 through July 11. For ticket information call 503-248-4335, or go to www.broadwayacrossamerica.com