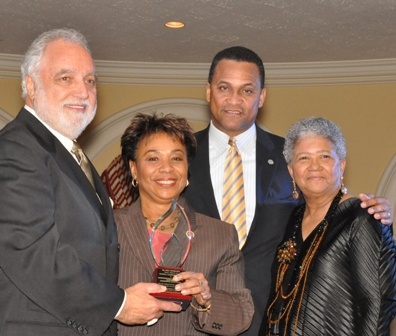 WASHINGTON (NNPA) - Congresswoman Barbara Lee (D-Calif.), chair of the Congressional Black Caucus, said that the National Newspaper Publisher Association Foundation's celebrating her political leadership affirms the work of the CBC as "the conscience of the Congress."
"As we cast this vote, we're casting this vote for all of our family members and friends who died prematurely because they did not have access to health care," she said.
While Michael Jackson was honored as the acclaimed NewsMaker of the Year at the annual celebration of the Black Press of America, nothing dominated headlines the majority of the year quite like the health care reform fight on Capital Hill. Three days after receiving the award, the long-awaited final vote for health care was made on Sunday as the deadline for NNPA News Service passed.
Lee was described by NNPA Chairman Danny Bakewell as someone "who has done so much for the Black press, Black politics and pushing our agenda forward" and as someone who is not afraid to stand alone on her own convictions.
"She was the single and sole voice in the United States Congress, Black or White, male or female, who had the audacity to look everyone of her colleagues in the eyes and to look the national media in the eyes and to vote no for George Bush when he wanted to go to war against Iraq," said Bakewell.
Lee was honored on Thursday at the annual gala celebrating the year's biggest news makers and public servants at the Omni Shoreham Hotel in Washington, D.C. The event was a part of Black Press Week. The Newsmaker Awards has become one of the signature events of the Black Press over the past 14 years.
The evening's host, radio personality Joe "The Black Eagle" Madison, himself a former NorthStar community service award winner, kept the evening light as Black publishers dined with friends and associates. They were treated to the musical stylings of University of Southern Mississippi graduate student Deanna Tisdale and Grammy award-winning urban jazz harmonicist Frederic Yonnet. Rep. Maxine Waters (D-Calif.) also attended the awards dinner.
Dorothy Leavell, chair of the NNPA Foundation and publisher of the Chicago and Gary Crusader newspapers and Bakewell, who is also publisher of the Los Angeles Sentinel, presented the evening's other esteemed award to Dr. Dorothy Height, the then 97-year-old civil rights and women rights icon.
She turned 98 this week. Dr. Dorothy Height was not feeling well and unable to attend to receive the Lifetime Achievement Award for her half century pursuit of social justice. Nevertheless, the honor was bestowed upon the longtime chair and president emerita of the National Council of Negro Women.
"What is so amazing about [Dorothy Height] is the sincerity, the knowledge and the love that she gives to her community everyday," said Leavell. "When she speaks, everybody listens. She has been the council to many presidents, she has been the mentor to many, many young people. She tells the story of her wanting to head up the organization that she still heads up today after meeting Dr. Mary McLeod Bethune."
Michael Jackson was named NNPA Foundation's "Newsmaker of the Year". NNPA's chairman posthumously honored Jackson with the night's highest award. Billions mourned when the celebrated entertainer died in June. His death dominated news outlets for weeks and temporarily crippled the Internet as many high-traffic websites were overburdened by Michael Jackson-related searches.
"Michael, as we all know, was truly a legend of his own time," Bakewell said. "The one bad thing is that he was not appreciated as much when he was with us as people now acknowledge and appreciate him in his absence. But we think the Black press, and I think he knew, I've talked to his family, that the Black press always gave proper acknowledgement and appreciation for his being the tremendous entertainer that he was."
Jackson's life and career was celebrated and detailed in an exciting music video produced by Howard University doctoral student Frederick Kendrick that was met with a standing ovation.
Other esteemed NNPA Foundation award recipients included veteran civil rights activist Dr. Ron Daniels, president of the Institute of the Black World 21st Century and Earl and Amanda Stafford of the Stafford Foundation, who were all recognized with NorthStar Community Service Awards.
"Ron Daniels is slated to receive the NorthStar Community Service Award this evening not just because of what he's done in the past or just not because of what he's doing but because of the heart of this man, the courage of this man, the intestinal fortitude and commitment of this man we believe in him for the future," said NNPA Foundation interim executive director and News Service editor-in-chief Hazel Trice Edney, who presented Daniels' award.
Stafford and his wife head the Stafford Foundation, a faith-based, non-profit organization that caters to the under-served and marginalized.
"In partnership with his wife, Amanda, Mr. Stafford dedicated the Stafford Foundation to the principle of providing opportunities to help individuals become self-reliant and live in dignity," said the award's presenter Jocelyn Allen, vice president of public affairs and corporate communications for Onstar. Amanda Stafford accepted the award on her and her husband's behalf. He was not able to attend due to business that required him to be out of the country.
Dallas County District Attorney Craig Watkins received the Russwurm-Cornish Award for his work in helping to exonerate people wrongfully convicted of crimes.
"He's done so much to help the African-American people not only in Texas but this conviction integrity unit of his has spread across the nation and, hopefully, anybody that's been wrongfully convicted would be exonerated," said Dallas Examiner publisher James Belt, who presented the award with his wife Mollie Belt in advance of the gala because Watkins was not able to attend. "And that's why we've recommended Craig Watkins as one of the news makers of the year."