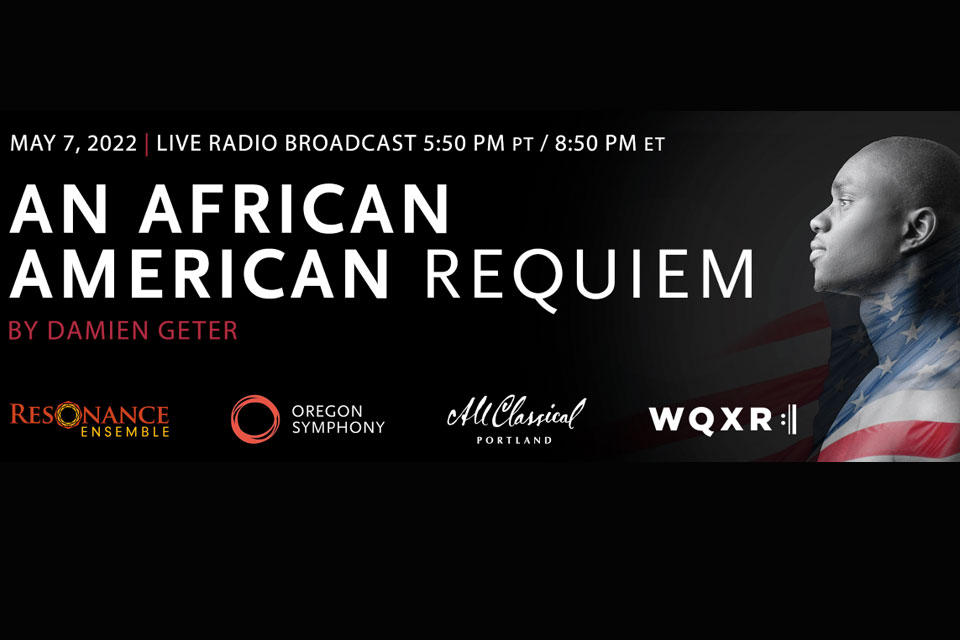 Commissioned by Portland’s Resonance Ensemble, this pivotal work memorializes the lives of Black Americans lost to racial violence in a first-of-its-kind requiem. A collaboration between Damien Geter, Resonance Ensemble, and the Oregon Symphony, the world premiere will be performed at the Arlene Schnitzer Concert Hall in Portland on Saturday, May 7, at 5:50 p.m. PT. The live broadcast will be available at 89.9 FM in Portland, 105.9 FM in New York, and streaming worldwide at allclassical.org.

“As a Black composer in today’s America, I feel like I've been writing this my entire life,” says Damien Geter. “I was hoping there would be a time we wouldn’t need this piece, but I think we always will.

"I hope An African American Requiem leads to important action that affects change.”

The requiem includes African American spirituals as well as texts from civil rights activists Ida B. Wells and Jamilia Land. It also highlights words dedicated to Eric Garner, a line from a poem by Antwon Rose, and words written and performed by Portland poet S. Renee Mitchell.

Originally slated to premiere in April 2020, the requiem was put on hold due to the ongoing global pandemic. The renewed production will feature the Oregon Symphony and the African American Requiem Choir, made up of singers from Resonance Ensemble, Kingdom Sound Gospel Choir, and Portland-based choirs. William Eddins will conduct, and Resonance’s Artistic Director Katherine FitzGibbon will prepare the chorus. The concert will also feature a quartet of renowned African American opera singers: Brandie Sutton, soprano; Karmesha Peake, mezzo-soprano; Bernard Holcomb, tenor; and Kenneth Overton, baritone.

'The power of music'

“An African American Requiem and its recent composition for chorus and orchestra is a painful reminder of the horror and ongoing threat of racial apathy and intolerance,” says Terrance McKnight. “It is also a reminder of the power of music to bring us together as a community of concerned and compassionate listeners around the globe. I look forward to bringing the world premiere to our listeners.”

All Classical Portland and WQXR are also partnering to syndicate the program to radio stations across the country, following the world premiere. The syndicated presentation will be available in early June 2022, in time for stations to observe Juneteenth with their own broadcast of the program. More information about syndication can be found at allclassical.org/requiem.

“This is public radio at its best,” says Suzanne Nance.

“Amplifying art that reflects our society, and uplifting the powerful work of composers like Damien Geter, is at the heart of our mission at All Classical Portland. We are proud of this collaboration with the performers and New York City’s WQXR. By working together, we will increase the national and global access to an important work, through an unprecedented live broadcast event.”

Damien Geter and S. Renee Mitchell have collaborated with All Classical Portland in the past. In 2020, the station commissioned and premiered Geter’s String Quartet No. 1 “Neo-Soul.” The same year, Mitchell was commissioned by the station to author a poem revolving around the words “joy,” legacy” and “voice.” Her reading of the poem, “Harmonizing with Joy” is currently spotlighted at allclassical.org, as part of National Poetry Month in April.

Those interested in attending the May 7 performance in person at the Arlene Schnitzer Concert Hall can visit the Oregon Symphony’s website at orsymphony.org for tickets and more information.