2 Year Old Now Loves Her Bonnet Thanks to New Disney 'Rise Up, Sing Out' Series 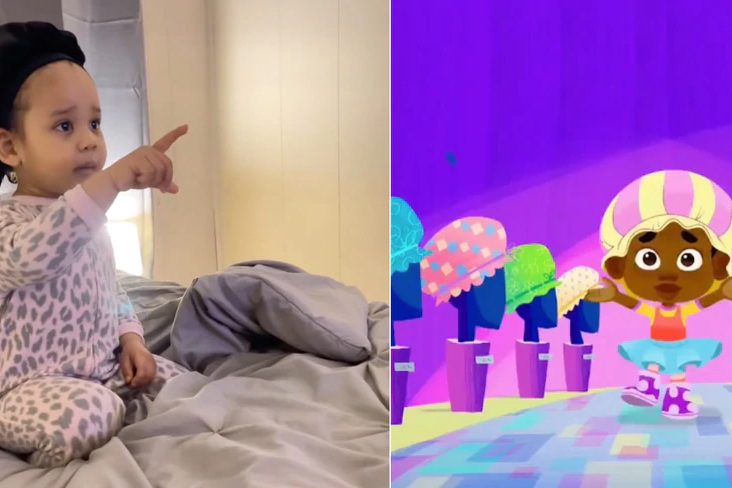 A 2-year-old learned to keep her bonnet on through the night by watching Disney’s new Rise Up, Sing Out cartoon series.

Rise Up, Sing Out is a new animated musical series from musical legends Ahmir “Questlove” Thompson and Tariq “Black Thought” Trotter. The new series, currently streaming on Disney +, touches on a number of racial, identity, community and cultural issues, giving children the proper language to have the necessary conversations and celebrate each other’s differences.

"The Rise Up, Sing Out shorts touch on a lot of real-world issues, especially for young Black kids, that just weren't talked about when we were growing up. The beautiful thing about these shorts is that not only are they going to provide young kids the proper language to talk to their friends and family about some of the things that might be bothering them, but it's also going to give parents the tools on how to respond," Questlove told NPR. Recently, a mom took to social media to show a clip of her 2-year-old daughter Mila watching the series, saying her toddler learned to keep her hair bonnet on through the night by watching the new series.

Prior to watching the series, Mila had been pulling the bonnet off nightly. After hearing the “Super Bonnet” song, sung by actress Nia Madison Thompson, and making the connection, she decided she’d keep the protective hair cap on while she slept. When her mom came to visit her in the morning, she still didn’t want to take it off, mom captioning the video “It worked!”

The video caught the attention of the young actress who voices the character Taniya in the series, Nia taking to social media to share how awesome it was to see the song impact so many children. Not only had the song changed Mila’s view of her bonnet, but the opportunity had also changed Nia’s life.

“WAKING UP to learn your song/episode #SuperBonnet is going viral as part of an inspiring video by this beautiful little girl [Mila] with millions of views…DREAMS DO COME TRUE! In 2019, I told [Access Hollywood] ...that I wanted to be an ACTOR, SINGER & ACTIVIST. I’m so blessed to be manifesting that dream through the role of TANIYA in the series,” Nia wrote.

In fact, Nia was so moved by the video of young Mila that she decided to meet her for herself, going live on Instagram to sing the Super Bonnet affirmations with Mila while the toddler danced in her silk bonnet.

The heartwarming videos have already captured the hearts of millions. This is exactly what the kids need. Special thanks to Questlove, Black Thought and Disney for doing all they can to create a brighter future through the children.