The 6 Most Memorable Moments From The BET Awards 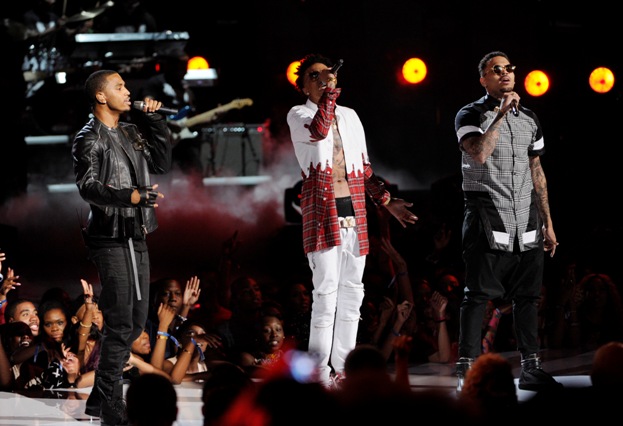 Trey Songz, from left, August Alsina and Chris Brown perform at the BET Awards at the Nokia Theatre on Sunday, June 29, 2014, in Los Angeles. (Photo by Chris Pizzello/Invision/AP)

LOS ANGELES (AP) — After nearly four hours of prizes, performances and the occasional bleeped expletive, the 2014 BET Awards came to a close. When it was all over, Pharrell Williams had two trophies, as did newcomer August Alsina, and Lil Wayne dropped the mike, apparently breaking it.

Here's a look at some of the memorable moments that emerged from Sunday night's ceremony, broadcast live from the Nokia Theatre on BET:

— Accepting her fifth consecutive award for female hip-hop artist, Nicki Minaj gave a rambling speech in which she said she was recently near death.

"The other day, literally I didn't tell anybody this, I really thought I was about to die. Like, I was saying my prayers to die. And I didn't even want to call the ambulance because I thought, 'Well if I call the ambulance, it's going to be on TMZ,'" Minaj said, as some of the audience laughed.

"And I would rather sit there and die," she added, looking to the crowd. "And it made me realize I don't care what anybody got to say. I'm going to do me." 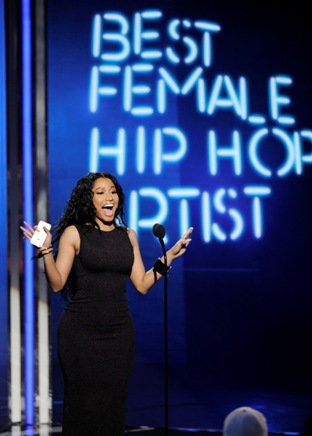 Nicki Minaj accepts the award for best female hip hop artist at the BET Awards at the Nokia Theatre on Sunday, June 29, 2014, in Los Angeles. (Photo by Chris Pizzello/Invision/AP)

Lil Wayne accompanied Minaj to the stage to accept her award, just as she joined him — and dozens of others — onstage to accept the best group award for Young Money. At the conclusion of that acceptance speech, which featured an appearance by Wayne's daughter, he didn't just drop the mike, but the whole microphone stand.

— Chris Rock proved a winning host, opening the show with barbs aimed at Donald Sterling and heavyset rapper Rick Ross, sneaking clever swipes into his artist introductions and passing out food from Roscoe's House of Chicken and Waffles to hungry audience members.

Of the 80-year-old Sterling, Rock said, "The first black man he ever met, he got for Christmas." Rock teased at the East Coast-West Coast rap rivalry, saying the West won because Dr. Dre sold his Beats brand to Apple for $3 billion earlier this year. Everyone wants to get into the headphone business now, Rock said. "Dre has Beats," the comedian said. "Rick Ross has Dia-Beats."

As Rock introduced Usher, he noted the singer "discovered Justin Bieber, and now he's going to spend the rest of his life apologizing for it." And the comedian aimed a zinger at Chris Brown, who was recently released from jail and performed two songs during the show.

— Maybe Pharrell Williams should have been seated just offstage. The multitalented entertainer opened the evening with a playful performance of "Come Get it Bae," backed by a flurry of cheerleaders. Reclusive rapper Missy Elliott also joined in.

He was back onstage twice to accept awards — video of the year for "Happy" and best male R&B/pop artist — and returned a fourth time to introduce lifetime achievement award winner Lionel Richie.

Richie's lifetime achievement award was celebrated with music. The 65-year-old singer-songwriter performed two of his classic hits: the Commodores' "Easy" and his '80s party anthem "All Night Long (All Night)," before being feted by other artists. John Legend crooned Richie's love song "Hello" from the piano, a song he said he's been performing since high school. Ledisi rocked an enthusiastic version of "Brick House." And gospel singer Yolanda Adams brought the house down with her moving rendition of "Jesus Is Love."

"If you are lucky enough in this business to have years of songs, as opposed to a couple of songs, (it's) something to be proud of," he said.

— Rising stars Alsina and Jhene Aiko shined brightly. Alsina was moved to tears as he accepted the first award of the night, best new artist.

"I represent the struggle," the New Orleans newcomer said onstage. "This award is not for me, it's for the people."

Alsina returned to accept the fan-voted viewers' choice award, where he beat Beyonce and Drake, saying, "I ain't gon' cry this time!"

Aiko performed with John Legend, singing "The Worst" as he played piano.

— The night's leading nominees, Drake, Beyonce and Jay Z, were all no-shows. Each had five nominations.

The superstar couple, who recently launched their joint "On the Run" tour, still had a major presence: A prerecorded performance by the pair at their concert closed the show.