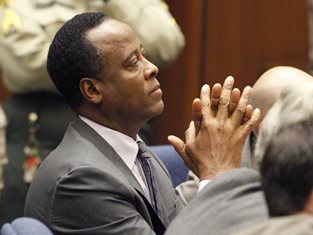 (CNN) -- The convicted former physician of Michael Jackson, Dr. Conrad Murray, has recorded an audio "letter" to the King of Pop's daughter Paris following her hospitalization on Wednesday because he cares about her, Murray told CNN in a statement via his attorney.

His lawyer confirmed to CNN that Murray provided TMZ with the taped message, in which Murray told the 15-year-old: "I don't know what you're going through, but I'm sure whatever it is, it must be difficult. ... I don't know if there's anything I can do to solve your pain, or help you with your problem, but I wanted you to know that I am here for you."

The motivation, Murray's lawyer said, was his love for Jackson's children, which also includes sons Prince, 16, and Blanket, 11.

Murray, who's been convicted of involuntary manslaughter in connection with the 2009 drug overdose death of Michael Jackson, reportedly used a payphone to record the message.

"From where I sit, all I have to give is love. I love Paris with all my heart and I just want her to be well and happy. Upon hearing the news of her current crisis, I was gravely affected," Murray said in his statement to CNN.

In the early hours of Wednesday morning, Paris was rushed to the hospital after cutting one of her wrists. According to sources familiar with the situation, the teen called a suicide prevention hotline that morning, and a counselor called 911 to the Jackson home in Calabasas, California.

In his statement, Murray explained that he "reached out to her through my statement to let her know that I care deeply about her, and I always have, and I always will. She will continue to be in my prayers."