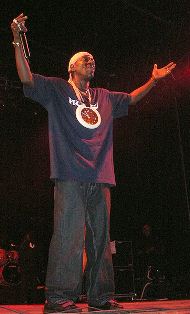 It's the night before the 53rd birthday for the celebrity whose public persona is as big as the clock he wears on his chest.

His real name is William Jonathan Drayton Jr., and he's tried the chicken restaurant recipe before.

An announcement says the Las Vegas store isn't associated with the one in Iowa.