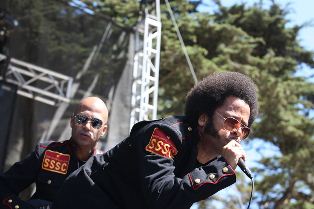 SAN FRANCISCO (AP) -- Hip hop heavyweights known as much for their fiery political lyrics as for their bass-pounding beats have been among the thousands marching, tweeting and sharing dinner with protestors in the Occupy Oakland protests in recent weeks.

MC Hammer, Raymond "Boots" Riley of hip hop group The Coup, and local rapper Mistah FAB have become a regular presence at the encampments, taking up bullhorns and staying until dawn even amid clashes with police.

Now, as the far-flung movement challenging the world's economic systems and distribution of wealth gains momentum, the artists say despite their fame, they, too, stand for the 99 percent.

"I'm trying to make a soundtrack out there that rallies people around certain ideas about living in this system into motivation," Riley said. "This movement is only a couple of months old, and if you compare anyone's favorite social change movement they haven't accomplished as much as what's happened already."

The working class city's music has long been fused with movements for social change.

The Black Panthers had their own house soul group named the Lumpens, which performed tunes like "Revolution is the Only Solution". Tupac Shakur, who spent time in Oakland, rapped about police brutality after being beaten in a confrontation with local officers, and won his suit against the city.

"There is always a big element of politics that unfolds in Oakland's hip hop scene even if on its surface it seems playful," said Ali Colleen Neff, a former San Francisco Bay area music critic who studies underground music movements at the University of North Carolina, Chapel Hill. "Boots and the others know there is power to be gained from this kind of coalition building across ethnic and cultural lines."

Riley was born into a family of radical organizers, and came up in East Oakland. At 14, he joined a communist party and worked as an organizer in housing projects and farmworker communities, but decided to start his musical career after seeing the impact of Public Enemy's anthem "Fight the Power".

As the leader of The Coup, a left-leaning rap group that's been politically active for about two decades, he is accustomed to critiques. Riley's award-winning album "Party Music", was set to be released right after Sept. 11, 2001, with original cover art that depicted him and band mate Pam the Funkstress destroying the Twin Towers, coincidentally shot months before the attacks. The release was delayed while his label prepared new cover art, but not before it was pilloried on conservative talk shows.

Since then, Riley has been named one of the most influential people of the year by Vibe Magazine, written a soundtrack for The Simpsons and formed a new band called the Street Sweeper Social Club with Tom Morello, Rage Against the Machine's guitarist who performed before the Manhattan encampment.

Riley said he sees hope in the Occupy Oakland's autonomous structure, and will take his cues from the movement's decentralized decision-making bodies.

"No movement has had total unity of thought and action," he said. "There are people who have a romanticized notion of how things are supposed to work but it's gotta be rough around the edges because that's why we're able to grow."

After thousands of peaceful protestors rallied and danced in the streets on Wednesday, MC Hammer found himself in the middle of a police standoff before a splinter group clashed with authorities, setting fires, spraying graffiti and shattering windows.

"It's tense down here .. I'm lost for words ... I'm (at)occupyoakland," Hammer tweeted, posting pictures of officers forming a barricade. "The people are peaceful .. I'm in the camp and now in the streets."

Mistah FAB, a star in the West Coast hyphy scene, a local hip hop strain, has been bringing his three-year-old daughter to the protests. He said he was sorry to see that the peaceful shutdown of the Port of Oakland ended in broken shop windows.

"I don't agree with tearing down your own stuff, in your own city," said FAB. "Those small business owners work super hard to maintain these things they've built. They're not the one percent."

Those in the movement's trenches say they're glad to see their message has attracted celebrity support, but some financial reinforcements would be nice, too.

"I'm proud that they are participating in the movement, because it's people who all have a vested interest in the image of Oakland," said D'Aunta Lewis, a college student who grew up in East Oakland and has been sleeping at the encampment. "But I say, don't just tweet about it from a distance, buy some tents and show your support."