By Kam Williams, Special to The Skanner News
Published: 29 October 2009 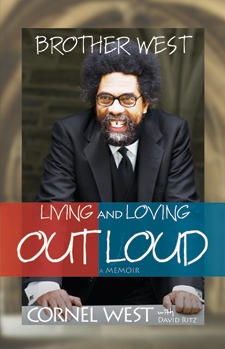 "My foundation consisted of three powerful elements: family; the Socratic spirituality of seeking the truth; and the Christian spirituality of bearing witness to love and justice... I also got the benefit of living in a black community filled with love and care. Today they call it a 'hood. But back then, it was a sure-enough neighborhood, with ties of empathy and deep bonds of sympathy… Even at this early age, the question kicked in: is it possible to love oppressed people and not be a fanatic for fairness?"


Everybody knows Cornel West, the public intellectual, the popular Princeton University Professor and best-selling author who has remained dedicated to the plight of the poor and underprivileged over the course of his illustrious career. Yet few know anything about his private life, or about what has inspired him to remain on such a righteous path and in touch with his roots over the years.
Now at 56, Dr. West has decided to share his life story in a moving memoir co-authored by David Ritz. I'll be the first to admit that I'm suspicious of any autobiography with a ghostwriter, because I've been bored to tears by many an inauthentic mess, such as the infuriating insult to the intelligence by Johnny Cochran, which read like a 300-page long sales pitch for the late attorney's law firm and didn't even sound like it was written by a Black person, let alone a legal crusader who had championed the cause of the underprivileged.
Fortunately, David Ritz has an impressive resume, having previously collaborated with such African American icons as Tavis Smiley, Aretha Franklin, Smokey Robinson, B.B. King, Ray Charles, Sinbad, Etta James, and most recently, convicted killer-turned actress Felicia Snoop Pearson on a riveting, relentlessly-graphic, warts-and-all bio which this critic reviewed.
In the case of Cornel West, Ritz has crafted a remarkably intimate opus which somehow manages to preserve the colorful cadence of his subject's distinctly-melodic vocal phrasings, so the words virtually leap of the pages as if in Technicolor.
More importantly, the tales recounted here reveal mostly experiences apt to resonate with the average African American, Dr. West's ivory-towered, academic credentials notwithstanding. For example, this is how he recounts the day he was arrested after being profile-stopped by a cop while passing through upstate New York.

"Get out of the car, boy." Policeman looked over my driver's license, looked me in the face, and then nodded his head. "Yup," he said. "You're the guy."
"What guy?"
"Nigger we been looking for."
"For doing what?"
"Selling cocaine."
"I don't sell cocaine."
"What do you do?"
"Teach philosophy and religion. I'm a professor."
"And I'm the Flying Nun… We got you down as a major dealer."
"Impossible."
"That's what they all say."

Then, the officer proceeded to handcuff his "perp" and to drive him down to the police station for booking. The same thing has happened to me and to hundreds of thousands, if not millions of other innocent Black males. So, to hear of Dr. West's nightmare is not so much shocking, but rather an opportunity to feel gratitude for the indictment of a national disgrace by a brother with access to the mass media. It's frank vignettes like that arrest incident which help explain exactly what shaped Cornel West's world view, and why he refuses to rest so long as there still remains any suffering among the least of his brethren.
The candid reflections of an uncompromising, compassionate Christian with a functioning conscience and an open heart.