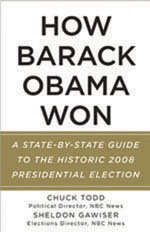 "How Barack Obama Won: A State-by-State Guide to the Historic 2008 Presidential Election" is by one of the most lauded political journalists of our time, and one of the most respected pollsters in the business — Chuck Todd and Sheldon Gawiser. The book gives us not only the inside state-by-state guide to how Obama achieved his victory, but also the essential toolbox for understanding the political implications of the 2008 presidential election—where the country stands vis-à-vis Red and Blue states, where it currently is and is headed politically, and whether a political realignment has taken place.
The book features an introduction by Todd – Political Director of NBC News — putting the 2008 presidential election in political and demographic perspective, even as it reveals national trends. The final electoral map will appear in the front matter, as will unexpected "fun facts." The book is divided into four parts, each of which proceeds alphabetically state by state: Battleground States (e.g., Colorado, Florida, Idaho); Emerging Battleground States (e.g., Arizona, Georgia, Montana); Receding Battleground States (e.g., Michigan, Pennsylvania); Red and Blue States (e.g., Idaho and Mississippi, California and New York).
The votes in each state for Obama and McCain are broken down by percentage according to gender, age, race, party, religious affiliation, education, household income, size of city, and according to views about the most important issue (the economy, terrorism, Iraq, energy, healthcare), the future of the economy (worried, not worried) and the war in Iraq (approve, disapprove). Comparative figures for the 2004 Bush–Kerry election are provided. Each state profile is comprised of a table of numbers—with crucial lines highlighted—and analysis.