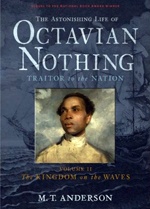 Author M.T. Anderson will read from "The Astonishing Life of Octavian Nothing: Volume II: Kingdom on the Waves" from 7 to 9 p.m. Thursday, Nov. 6 at The Seattle  Public Library, Central Library, 1000 Fourth Ave., Microsoft Auditorium, Level 1.
"The Astonishing Life of Octavian Nothing: Volume I: Pox Party" won the 2006 National Book Award for Young People. Anderson lives in Cambridge, Mass.
"The Astonishing Life of Octavian Nothing" is about a young Black slave in colonial America. In "Volume I: Pox Party," Octavian discovers that the people he is living with are using him in an experiment to determine the intellectual ability of Africans. The book ends with his escape.
In "Volume II: Kingdom on the Waves," Octavian hears about the British offer of freedom to enslaved Africans who join the British forces during the American Revolutionary War.
Anderson previously wrote the books, "Thirsty" and "Feed," which won the 2002 Los Angeles Times Book Prize and was a 2003 Boston Globe-Horn Book Award Honor Book.
The program will be presented in partnership with the University Book Store. Books will be available for purchase and signing.
The program is free and open to the public. No registration is required. Parking will be available in the Central Library garage for a $5 special event rate.
For more information, call The Seattle Public Library at 206-386-4636.