Oregon Loves New York: A Story of American Unity After 9/11 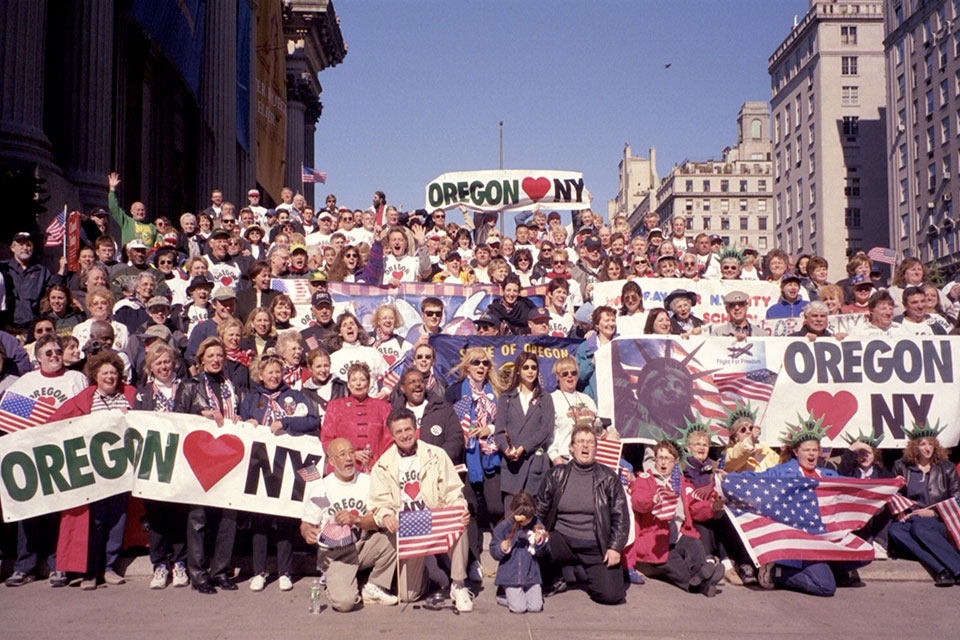 Three weeks after the 9/11 terrorist attacks, when the world was afraid to get on an airplane much less a plane to New York City, 1,000 Oregonians led by Portland Mayor Vera Katz took 62 flights through twelve airports across the country to show the terrorists they had not shut down American life and to boost the tanking New York economy. What they found were fellow Americans who needed more than their money, they needed their hearts. The Flight for Freedom is a little-known story of Americans at their best, being there for their fellow Americans in a time of tragedy. 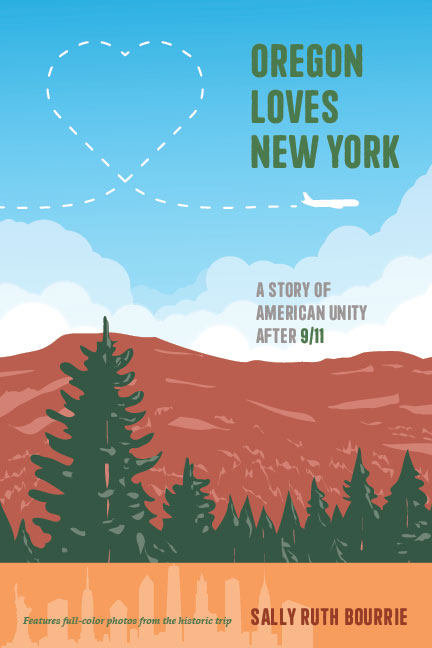 In observance of the 20th anniversary of the 9/11 attacks, Oregon Loves New York: A Story of American Unity After 9/11 captures their story. Based on more than 100 interviews, memoirs, and hundreds of news articles as well as personal experience, Oregon Loves New York documents previously untold 9/11 history, a moment when the United States came together. The book includes nearly 200 color photos from this historic trip.

While other cities and states aspired to emulate the project, no other community was able to bring together its citizens in a similar effort.

The Oregon Historical Society in Portland is hosting a book event with author Sally Ruth Bourrie the afternoon of September 11, exact time to be announced.

The Flight for Freedom was a completely volunteer-based trip. The airlines and hotels offered prices at less than cost. Packages started at $379 for airfare and two nights at the Waldorf-Astoria hotel. (They were empty anyway.) Organizers, who were civic and business leaders from across Oregon, hoped to find 200 participants. Within days, they had to cap participation at 1,000 to have time to ticket.

The Freedom Fliers came from across the state – rural and urban, Republican and Democrat, all colors, races, religions. Nobody asked, nobody cared about people’s backgrounds, though organizers made an effort to ensure that the group included Muslims and people of color, and raised funds for scholarships as well.

While they were in New York, Oregonians marched in the Columbus Day Parade, rang the bell at the Stock Exchange, held a memorial service at Union Square, appeared on Good Morning America and other TV and radio shows, spoke at the Cathedral of St. John the Divine’s Blessing of the Animals, and dined in a Chinatown banquet for 700, along with other activities. Easy to spot in T-shirts and buttons with two Douglas firs and “Oregon ♥ New York,” Freedom Fliers were routinely stopped, hugged, and thanked by raw, shell-shocked New Yorkers. The Oregonians embraced the New Yorkers at every level; they listened to their 9/11 stories and were present in more ways than they could have anticipated when they answered the call.

Author Sally Ruth Bourrie covered the event for the Chicago Tribune and The Boston Globe. Learn more about the Flight for Freedom and Sally at https://oregonlovesnewyork.com. See Sally’s writing portfolio at https://sallybourrie.com.