Book Review: ISIS: Inside the Army of Terror 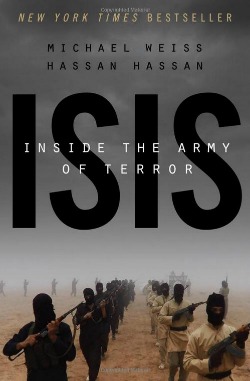 Book Review by Kam Williams: ISIS: Inside the Army of Terror by Michael Weiss and Hassan Hassan

“This book… set out to answer a simple question asked repeatedly on cable news shows: Where did ISIS come from, and how did it manage to do so much damage in so short a period of time?

The question was understandable, given the images and videos circulating… most notoriously, the horrifying propaganda beheadings of several Western hostages. But the question was also a strange one, because the U.S. has been at war with ISIS for the better part of a decade.

ISIS is a terrorist organization, but it isn’t only a terrorist organization… At once sensationalized and underestimated, brutal and savvy, ISIS has destroyed the boundaries of contemporary nation-states and proclaimed itself the restorer of a lost Islamic empire. An old enemy has become a new one, determined to prolong what has already been an overlong war.”

Excerpted from the Introduction (pages xiii-xvi)

What is ISIS? Where did it come from? What’s its agenda? And how is it different from ISIL and Al-Qaida? These are the sort of questions addressed in ISIS: Inside the Army of Terror, a thorough study of the rapidly-rising terrorist organization which President Obama once condescendingly dismissed as just “the Junior Varsity team” to allay concerns when it captured Fallujah a year ago.

But ISIS, the Islamic State of Iraq and Syria, not only still holds the city, but has expanded its sphere of influence exponentially. Fortunately, Michael Weiss and Hassan Hassan have collaborated on an eye-opening opus explaining everything you ever wanted to know about ISIS but were way too afraid to ask.

The co-authors are not pointy-headed, chin-pulling professors pontificating from an ivory tower, but rather boots on the ground reporting on knowledge accumulated from considerable personal experience. Hassan is a native Syrian from a town that has long served as a portal for jihadists moving back and forth from Iraq. And Weiss is a veteran journalist whose beat was the war-torn city of Aleppo before it became an ISIS fiefdom ruled by Sharia law.

The book explains how ISIS was created in the wake of a split between two al-Qaida leaders, Osama bin Laden and the even more fanatical Abu Musab al-Zarqawi. Over the ensuing years, the terrorist organization has evolved into a trans-national arms and oil trafficking cartel capable of deploying foot soldiers anywhere in the Middle East. It also employs sophisticated marketing methods to recruit new members, and has managed to infiltrate many rival organizations before sabotaging them from within.

Perhaps most critically, ISIS has succeeded in positioning itself in the minds of many Sunni Muslims as the sect’s last line of defense against the United States, Israel and a host of supposedly-apostate Arab states. And it relies on a religious rationale to advocate the slaughter of such infidels by any means necessary.

To order a copy of ISIS, visit: www.amazon.com