By Bernie Foster, Publisher of The Skanner News
Published: 25 October 2010 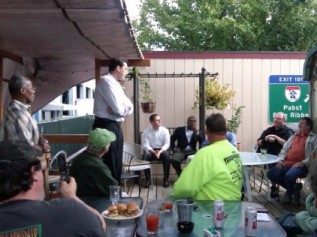 During election season, rumors, gossip and spin are so thick in the air that they sometimes obscure the truth. So when we heard from several sources that governor candidate Chris Dudley has avoided paying any Oregon taxes, we felt we had to set the record straight.

Dudley paid around $463,000 in Oregon taxes while he was a Portland Trailblazer between 1993 and 1997. He has never denied he moved to Camas after his financial advisor suggested it would save him money. Living in Washington state, which has no income tax, meant Dudley did not pay Oregon taxes on his capitol gains income, investments or endorsement fees. But he came to Portland on a seven-year, $11-million contract with the Trailblazers, and that income was always taxed in Oregon.

In addition, let's mention that Dudley has contributed significant sums to charities in Oregon. During his playing career, the basketball player turned financial manager donated $300,000 to the "I Have a Dream Foundation" to pay college tuition costs for one entire fourth grade class of Vernon elementary school students. His foundation also conducts a basketball camp for diabetic youth. Dudley knows what it is like to deal with the disease, which he has been living with since childhood.

Political ads are spin – not reality. And what 'everybody knows' is often no more than rumor, gossip and partial truth. So question everything and check out the facts with your trusted news sources. That's why we wanted to set the record straight.


Face The Nation Fails The Nation
Bob Schieffer interviewed Karl Rove on Face the Nation, Sunday. I've always enjoyed Schieffer's show, but this week the veteran CBS journalist simply lay down and let the Republican spin czar walk all over him. Rove was given 16 or 17 minutes to pontificate – and he made the most of it: throwing out Republican talking points like wedding confetti. In contrast, Democrat Chris Van Hollen was forced to squeeze his perspective into just 7 minutes.

Anyone who knows me is well aware that I'm hardly a kneejerk Democrat – being naturally skeptical of politicians of any stripe. But I know a skewed debate when I see it – and this was far from fair, balanced or objective.

The airwaves belong to us – we the people – and we lease them to broadcasters in the interests of free speech and democratic debate. In exchange, the networks have a responsibility to the American public. This week Shieffer and CBS failed to meet that standard of responsibility. And they need to hear that, yes: 'We noticed and we care'.