Free Speech Is Messy Business at the Pearl's 24-Hour Fitness 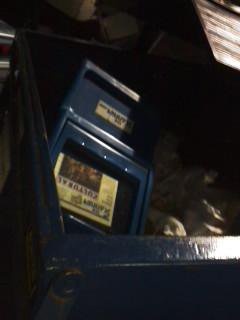 Portland's up-market Pearl district is considered to embody everything good about young, hip, creative Portland. Does that include free speech and, in particular, freedom of the press? Corporate managers at the Pearl's 24-Hour Fitness don't seem to think so.
At around 1 a.m. early Tuesday, Jody Lim from the Asian Reporter arrived to refill the newspaper stand outside of the Pearl's 24-Hour Fitness. But the Asian Reporter's newspaper stand – and The Skanner News box – were nowhere to be found. After looking around, Lim finally checked the dumpster and found The Skanner News stand. The next morning staff at 24-Hour Fitness eventually told her the Asian Reporter's box was across the street in a parking area belonging to the club.
"I was just shocked it was there," Lim said. "I told them about the First Amendment but they said they didn't know anything about that."
The public sidewalk does not belong to 24-Hour Fitness, but to the city. And city policy is to leave the boxes be- - in the interests of free speech – so long as they don't obstruct pedestrian access.
Lim says she asked a manager, Colby, why someone hadn't called the number on the side of the $200 stand – rather than remove it. "They couldn't answer that," she says. "I didn't understand how The Skanner's stand got into the garbage. But I never got an answer on that."
Jerry Foster of The Skanner News had noticed the missing stand earlier. "I figured someone was playing a joke and had moved it," he said. "So at 6 a.m. I had to drive around looking for it." He also talked to Colby.
"He told me that management came down and saw the stands and said they needed to clean that up," Foster said. "I was p*****."
Apparently "cleaning up" meant purging the ethnic minority papers. But stands containing The Oregonian, The Mercury, Willamette Week and USA Today stayed put.
"The sad thing is that when I was there I saw quite a few people of color exercising there," Foster said.
However 24-Hour Fitness manager, Colby (who refused to give his last name for this story) said it was a "cosmetic" issue. Managers had received complaints about the stands from club members. "The stands had these flyers that said 'Win a Date' stuck to them," Colby said. "They had letters from members saying the stands were in the street and blocking cars, blocking the sidewalk. They were not clean; they leaned over on the street and they were covered in graffiti. We have no problem with the stands being there, but they have to be upkept.
"We take big time pride in our club and we clean up the parking lot daily. That was an area that's consistently dirty. We just want to make sure it's clean and orderly."
Hmm. Doesn't exactly explain why only the ethnic minority papers were removed. And why The Skanner News stand was pitched into the dumpster.
"It got out of hand," he said. "Someone decided to do it. I was unaware they were taken out of there."
Someone?
"It could have been anybody – it could have been a couple of kids."
Besides, Colby said, he wants to move The Oregonian and USA Today, but they are currently chained to the building.
"We just want them to be clean, organized and well-maintained. We want to have them in one line on the sidewalk."
Democracy, free speech. Sometimes it's a messy business, folks.