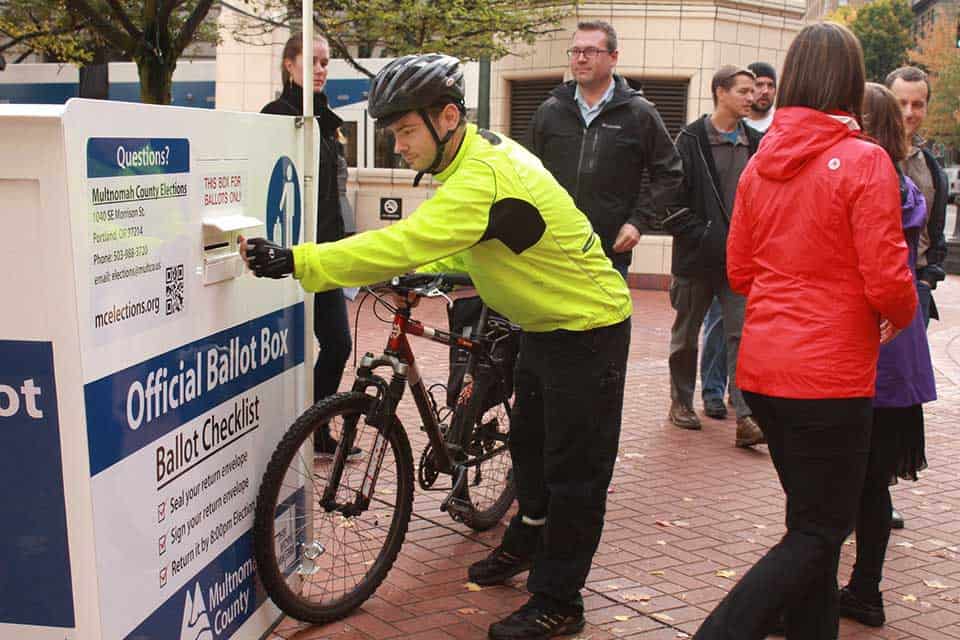 Polling is tight in some races this year, notably the governor’s race between Democratic incumbent Kate Brown and incumbent Knute Buehler, and as always, turnout is critical. In Oregon, voters’ pamphlets for the November 6 election will be delivered this week (Oct. 10-12). Oregon voter registration deadline is Oct. 16. You can register online or check your registration here.

Ballots must be submitted by 8 p.m. on Nov. 6, 2018. Drop sites in Multnomah County are listed here.

Earl Blumenauer is a proven leader and advocate for the state of Oregon. Most Oregonians know him as the high-profile environmental Congress member. But he is always at the forefront no matter which issue is raised—voting rights, gun safety, health care, jobs, VA reform, social security, he makes the strong case for the people of this state. He is the most experienced, and best qualified to continue representing Oregon in Washington DC.

Kate Brown, the consistent, steady, strong governor of this state has a reputation for taking on tough issues, and fighting for the people in an ethical and determined manner. She is not a show-off, or grandstander, she doesn’t need to shout to make a point, but she gets the job done in her own decisive way.

While she represents everyone in the state, rural and urban, she is known in communities of color as a person who hears their concerns and takes action. In North and Northeast Portland she is highly regarded as a champion of health care for children and families, a strong supporter of education, and making sure there are highly qualified educators and programs for students. She has advocated for making college affordable, especially for low-income students through the expansion of the Oregon Opportunity Grants. Governor Brown has worked to continue federal funding for mental health and health-related disabilities, protection for immigrant families, building affordable homes throughout the state. She has also focused on housing for the homeless population. And she is a proponent of sensible gun control.

Kate Brown is the proven leader who gets things done, she and has a plan to do much more for the citizens of this state. Her opponent, Knute Beuhler, wants to be all things to all people, but has been held up to scrutiny and comes up inconsistent. However, he is consistent in his opposition to sensible gun control legislation, and to women’s reproductive healthcare rights. Not to mention immigrants’ rights, and a long list of other issues we should be concerned about. He is not the person we want to lead this state. We need a governor who stands up for all people. Kate Brown is that person.

We endorsed former legislator, former NAACP Portland Branch president Jo Ann Hardesty this spring, and see no reason to change our position. A former state representative, she brings legislative experience to the city council, as well as a lifelong commitment to equity and justice. Over the last 15 years she has shown herself to be a tireless grassroots community organizer and advocate.

Incumbent Natalie Voruz has served on the Fairview City Council since 2015. In that time, she’s demonstrated leadership around transparency – calling for an audit of a stubborn colleague’s emails – and a commitment to addressing the growing community’s challenges head-on.

Janine Gladfelter was appointed to fill a vacant seat on the Gresham City Council in early 2017 and has risen to the occasion. She seems ready to meet the challenges presented by a community that is growing quickly and rapidly becoming more diverse.

Massene Mboup, an educator and entrepreneur originally from Senegal, is committed to making Lake Oswego a more affordable and equitable place for all residents. We hope voters give him the chance to do great things.

Christine Lewis has strong bipartisan support, and her focus on increasing available affordable housing and improving infrastructure make her a formidable candidate for this often overlooked but crucial seat.

Jamie Kranz’s diversity of experience – as a stay at home mom, a teacher and someone who’s worked in the retail and hospitality sectors – will bring a refreshing perspective to Troutdale’s city council.