Why We Must Vote on November 8

XV Amendment to the U.S. Constitution, Section 1
“The right of citizens of the United states to vote shall not be denied or abridged by the United States or by any State on account of race, color, or previous conditions of servitude.”

With less than a month to go until Nov. 8, early voting is opening in states across the country. Never mind the talking heads — it’s finally time for we the voters to have our say.

Yet for many Americans it is hard to feel enthusiastic.

That’s what we want. Yet what we seem to be getting is an endless stream of insults, threats and accusations. The 2016 election seems uglier and dirtier than ever.

Here at The Skanner News, we understand the feeling. But it’s not an excuse to not vote. Your vote is important.

Politics is a long game — we must look at what our choices now mean for the future. Our ancestors knew that life would be better for future generations if they voted. They endured denial of their right to vote by those who saw it as a threat to their power. We must honor their fight for equal rights under the law. And it should be with pride that we cast our votes in the November election.

You may expect the worst. But vote.

You may feel disappointed. But vote.

You may have to study the issues. But vote.

We have to vote to keep our leaders accountable because the more of us who vote, the better the results will be. There is power in numbers and there is power in our votes. African Americans and Latino voters will determine the results of this election.

This week The Skanner is publishing endorsements. We hope you will vote with us, but if you disagree we still want you to vote.

Our democracy is not perfect, but it is the best system we have. 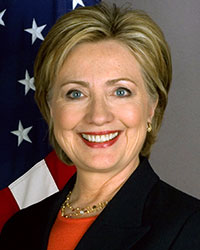 Hillary Clinton - Hillary Clinton has demonstrated, before ever running for office, high values and a consistent desire to help the poor and marginalized — not only in the united states but in other countries, such as Haiti. Her concern for women and families and work on their behalf is a hallmark of her legacy in politics. Clinton is an indisputably strong leader who has demonstrated her knowledge and ability to work on issues of domestic and foreign affairs. She is rock solid on securing a $15-per-hour minimum wage, affordable health care, jobs for working families, and supporting thriving businesses, large and small. She is a staunch supporter of the voting rights bill, and has fought for civil rights all her life. There is a reason so many African Americans support Clinton. She has always supported them and looked out for their best interests, despite being criticized by some.

Her opponent, Donald Trump, is not qualified to be president. There is nothing in his resume that shows he has the ability to lead this nation. He wants an America that looks like him, not the America that embraces diversity — the real America we all know and love.

Clinton is the level-headed, morally strong leader this country needs. Vote for Hillary Clinton for president of the united states.

Ron Wyden
Sen. Wyden has been a champion for the interests and values of Oregon. He is at the forefront on most of the hot button issues that confront this country, and can be counted on to speak up for the rights of all peoples. His town hall meetings around the state keep him in touch with citizens and their concerns. He has promoted treatment for opiod addiction, decriminalizing marijuana laws, advocated for cyber security and recently introduced a bill that would require presidential candidates to release their tax returns for public scrutiny. And much more. We urge voters to send Wyden back to Washington.

US HOUSE OF REPRESENTATIVES

Kate Brown
We believe Kate Brown has the leadership qualities and values that we want to see in our governor. Be it jobs, education, health care, affordable housing, ethics in government, transparancy in government, she has lead effectively on these and many other issues. Brown listens to the people, and acts on solving their concerns. She is passionate about improving the lives of all Oregonians. We know we can trust her to get the job done. Her opponent, Bud Pierce, has spoken for himself, revealing his lack of knowledge about male predatory behavior towards women. We’ll leave it there. Vote for the person who is best qualified to lead the state, Kate Brown.

Ellen Rosenblum
Rosenblum is doing an excellent job. We especially like her leadership on publicmeeting laws. She is best qualified for the job.

Brad Avakian
Avakian comes out ahead with his strong civil rights background. We urge voters to elect him to this office.

Tobias Read
Read has a wide range of experience in many areas, including revenue , tax credits, transportation, economic development, and has worked with businesses across the board. He knows how to collaborate to get things done. We believe he is the best qualified for this position.

DISTRICT 22: Lew Frederick
Frederick has shown steadfast leadership in the legislature, and is unopposed in this race. With an ear to the people he represents, he holds Saturday morning meetings to keep abreast of what is on their minds. Always open to ideas, and with a passionate conviction for the good of all he serves, Frederick has helped expose the need for more police accountability. He saw that it was not enough for citizens to videotape police officers but could not use audio, so he helped change that law so there is more transparancy in how police intereact with people during an arrest or confrontation. He has worked for treatment of state prison inmates’ mental health issues, and strongly supports small businesses.

We urge Frederick, and all state legislators, to push for state agencies such as transportation and health and human services to do business with minority-owned businesses. So many agency heads continue the old boy networks, and minority business enterprises are left out of the equation. There is much work for legislators to do on these issues. We urge them to take it on.

LOCAL JUDGES
Either elected in the primary or running unopposed.

Seven measures are certified to appear on the Oregon ballot on November 8, 2016.