To Go or Not to Go: Visiting the Dog Park 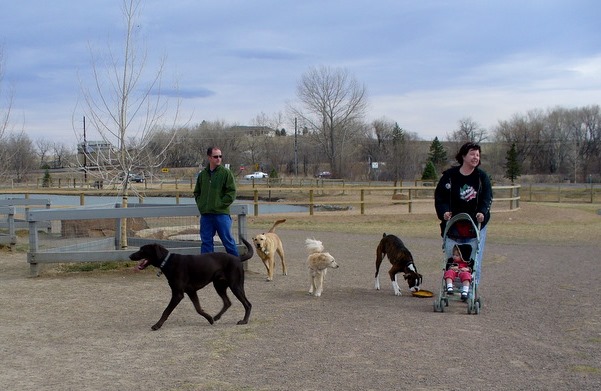 Yesterday my best friend called inquiring whether he should take his shy spayed female dog to the dog park. He told me he felt bad that she had never gone and wondered if she was missing out on the “Six Flags Amusement Park experience” of the doggy world.

Here are some considerations before visiting the dog park.

Some dogs LOVE the dog park while others could care less. Despite what many believe, not all dogs are fans.

My dog Sheba, for example, is more of a “people person” than “dog person” -- meaning when she is around other dogs she immediately goes for the humans, leaving the pups disappointed. (She also sits on park benches while at the park and refuses to play catch unless she’s indoors, but that’s another story.)

Age and health are important factors. Dog parks contain a larger density of pathogens and internal/external parasites than other open spaces. Viral transmission such as influenza, parvovirus and distemper can spread quickly with animals making frequent nose-to-nose contact.

Puppies that have not completed their full set of vaccines, dogs that are completely unvaccinated, immunocompromised and sick or injured animals should not be taken to dog parks. Animals recovering from major or minor surgery should not return to the dog park until they are fully recovered to avoid re-injury.

Dog parks with numerous feces files, stagnant water, mud or a stench should always be avoided due to sanitation concerns.

Dogs should be matched in temperament if possible. Shy dogs may not fare well with extremely friendly or assertive dogs and may exhibit aggressive or submissive behavior when cornered. Dogs with known aggressive tendencies, females in heat and intact (un-neutered) male dogs should not be taken to dog parks, since these encounters may result in fighting or accidental breeding. It is appropriate to inform another owner that your dog does not want to interact with their dog if you feel your dog is threatened, irritated, frightened or uninterested.

Dogs should also be matched in size. Choose a park with small and large dog play areas or open spaces for dogs to escape if they feel threatened. Placing a Chihuahua in a pen with a young great dane or lab could lead to injuries if the dogs play too rough or fall. Herding and hunting breeds should be watched closely and discouraged from exhibiting displays of field behavior in the park (herding, nipping or excessive baying) which may disturb, frighten or irritate other dogs.

Overall, dog parks serve a purpose: to socialize and exercise pets that may not otherwise get the opportunity. Some dog parks are amazing – others, not so much. Puppy play dates with friendly, familiar animals of known health status are a safe way to enrich and socialize your pet.

At the end of the day, you have to choose what works for you and your pet, and it may be as easy as a walk in the park.