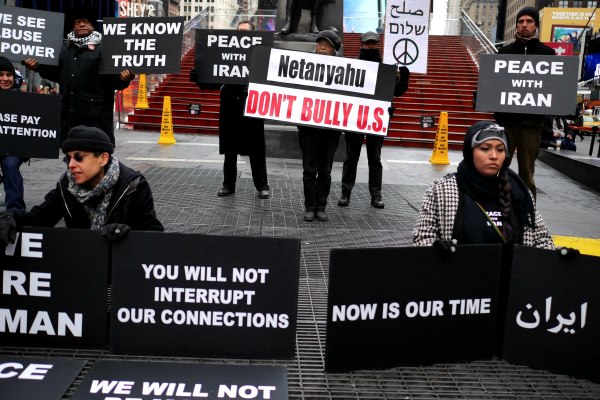 In Switzerland, Secretary of State John Kerry has closed a deal with Iran that has observers wondering if he’ll win the Nobel Prize. The deal creates a framework to place strict limits on Iran’s nuclear program, bring Iran back into the international trading community. And it would bring us all one step closer to peace.

The Iran deal might be President Obama’s greatest achievement— second only to bringing the U.S. economy back from its near death experience, when it was bleeding 750,000 jobs a month.

It might boost U.S. credibility around the world and strengthen our hand in future negotiations.

But it almost failed.

Last week an administration official told the Wall Street Journal that Israel had been spying on the US-Iran negotiations since 2012. What’s more, the report says Israeli officials had been leaking sensitive information and encouraging Republican members of Congress to sabotage the negotiations.

Israel denies the allegations and House Speaker John Boehner says he knows nothing about it. But their actions tell a different story.

Rep. Boehner and his party:

-- Undermined the White House and the negotiations by inviting Israeli Prime Minister Benjamin Netanyahu to trash U.S. foreign policy in a joint session of Congress and
-- Bypassed the administration to write a letter to Iran’s Supreme Leader Ali Khameini. The letter –signed by 47 Republican senators— set out to destroy US diplomatic efforts by saying that any agreement made would be worthless

It’s difficult to see how anyone could justify such dangerous and self-serving behavior. These Republicans put party before country. That’s wrong.

Unauthorized dealings with a hostile foreign government are outlawed under the Logan Act. That means Senate Republicans committed a felony.

And if you or I were to conspire with foreign governments to undermine the security of our country we’d be arrested and charged with treason.
So aren’t those Republicans traitors?

As for Netanyahu, three weeks ago in the middle of an election campaign, he saw an opportunity to grandstand for extremists back home. It worked. He was re-elected. But outside of Israel, his credibility has never been lower.

The United States will give Israel more than $3.1 billion in military aid in 2015. Add on another $175.9 million for the Iron Dome project and $96.8 million for joint defense projects. We’re Israel’s best friend in the world.

The White House seems to be rethinking America’s relationship with Israel. We agree. We should.