Drop Off Your Ballot and Make Your Vote Count: Full List of Ballot Drop-Off Sites 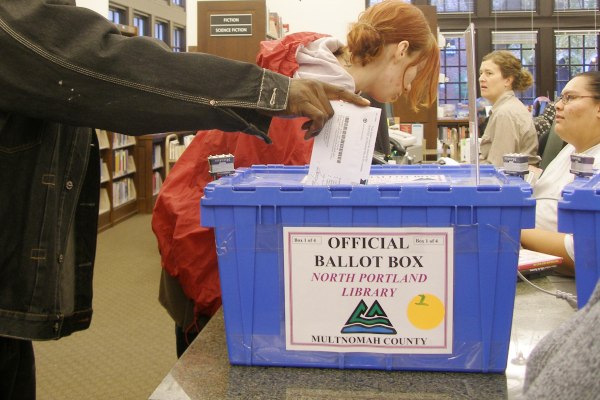 Portland resident Harry P. Henderson votes for the first time in his life, at the North Portland Library on Nov. 4. 2008. Photo by Brian Stimson

Here's where to drop off your ballots: scroll down for our endorsements:

Multnomah County Elections Office - 24-hour ballot drop slot available to pedestrians on the north side of the building as well as a drive-up box located on both SE 11th and SE Belmont. Voters may use the office to vote at any time during the voting period. The Elections office is the only location in the county that can issue a replacement ballot to a voter in Multnomah County.

24-hour ballot drop sites listed below are open and available beginning the day ballots are mailed out (20 days prior to election day) until 8:00 PM on Election Day.

Voted ballots may be delivered to any Multnomah County library until 8 PM on Election Day, but NOT ALL LIBRARIES ARE OPEN UNTIL 8pm Tuesday so see the list below.  For 24-hour access, please use the 24-hour drop box sites or the ballot/book return at Central Library.

Washington law allows you to vote by mail. Mailed ballots must be postmarked by Nov. 4 or sooner.

Systematic attacks on voting rights around the country, alongside exploding issues of street violence and racial justice, are bringing the public focus firmly to the ballot as a tool for making our communities better places to live and work. We at The Skanner News believe strongly in voter participation. We encourage you to support these ballot measures and vote on Nov. 4.

We are watching this Election Day with interest, because the critical measures on the ballot point to a more interesting midterm election than usual. Will there be a large voter turnout? We sure hope so – with gun control and transit funding on the line in Washington State, as well as retail cannabis and legal driving cards for undocumented motorists in Oregon, there are game-changing initiatives awaiting your participation.

In a field dominated by unknown candidates, we are supporting the one who has shown himself to be responsible, accessible and surprisingly progressive in the tough terrain of the Capitol. Sen. Merkley spends quality time with our local communities, and is responsive to issues facing our community—he returns phone calls. He has been very aggressive on consumer protection issues. We need him to continue fighting for Oregonians. We endorse Sen. Jeff Merkley.

As a consumer protection attorney with years of experience in the state legislature, our candidate made the jump into Congress squarely on the side of everyday people. Her big issues are taking care of the elderly, supporting small business, clean energy – and bipartisan cooperation. We endorse Rep. Susanne Bonamici.

Having worked at every elected level in the state – city commissioner, county commissioner, state legislator, and finally Congressman – our candidate has helped burnish Oregon’s reputation as a progressive state. He has endorsed universal healthcare, fought for the environment including the safety of bees, supported legalization of cannabis and more. We endorse Earl Blumenauer.

A steady leader who has made bipartisan cooperation his hallmark, our candidate is credited with bringing real benefits back to his constituents in Oregon. We endorse Kurt Schrader.

We are faced again with a lack of choices for state leadership. Gov. John Kitzhaber has been in the headlines for all the wrong reasons. Cover Oregon should have been his golden moment – but his lack of oversight in the $250 million of federal funds for the healthcare system resulted in one of the biggest scandals in Oregon history. We believe the incumbent is unresponsive to the needs of diverse communities, but at the same time, candidate Dennis Richardson’s views on women’s issues are extremely conservative, and he has no record of working on issues critical to people of color. Oregon has a leadership vacuum at the very top. We challenge our state’s political parties to do better. That is why at this juncture in history we cannot endorse any of the candidates for governor.

If passed this law would allow the legislature to sell bonds for a higher education loan fund benefitting college students as well as career training programs; it would not raise taxes, but it would give state lawmakers more tools to help college and trade school students get the best education they can. We vote YES.

n   Measure 87 allows judges to be hired by the National Guard and public universities; allows school employees to serve in the legislature.

This is little more than a housekeeping measure, brushing cobwebs out of our state Constitution. It would have no financial impact; why shouldn’t state court judges join the National Guard or take a teaching job at a college if they choose? We vote YES.

Our communities are far from reaching a consensus on improving our immigration laws and processes; but whatever you may think about the reform debate, this measure would make our roads safer and encourage a more humane attitude towards working families across the state. We vote YES.

Some people say Oregon doesn’t need an Equal Rights Amendment for women; at the same time, women are at the bottom of the socioeconomic ladder, with lower pay, less political representation and few corner offices in the corporate sector. Four retired state Supreme Court justices have made an open appeal for passage of this measure. We vote YES.

We are leery of changing the state elections system, especially after a sketchy campaign in which the ‘Yes on 90’ camp filed fake Voters Guide statements and even created a fake website to lampoon its opponents. Top Two has not resulted in less contentious elections or more ethnic representation in the two states in which it has passed – despite claims to the contrary. We vote NO.

Of all ballot measures facing voters in Oregon, this might be the most far-reaching. As the so-called War on Drugs has failed to stem their use and has filled our jails and prisons with low-level offenders – all at taxpayer expense – this measure might be the best chance we have to restore some sanity to the system. Legalize it, regulate it like alcohol, and create a new revenue stream for the state. We vote YES.

We want to know what’s in the food we’re eating – what’s wrong with that? We vote YES.

This measure continues the already-existing parks bond, which is modest and has so far been very well spent by Portland Parks & Recreation. Funding parks is one of the best investments we can make in community health, violence prevention and quality of life. We vote YES.

n   Measure No: 26-160 would retain the prohibition on Metro-required single-family neighborhood density increases.

If passed, this measure would continue a voter-imposed limitation on Metro’s planning power – specifically it keeps Metro from requiring more infill homes in neighborhoods for the next 16 years. We are all for affordable housing, but our concern is that so many beautiful houses are being torn down to make room for multiple, overpriced, cheaply constructed homes. We vote YES.

We don’t support every single thing the Portland Public Schools does, nor do we support an avalanche of bond measures pouring additional costs on every single household in the district. But this is, at its heart, a tool for creating and maintaining jobs – one of the best ways taxpayers can invest directly in our local communities. We vote YES.

Why vote for a measure without any funding included? Unlike Portland Public Schools’ bond measure, this isn’t going anywhere. We vote NO.

n  Initiative 591 would prohibit government agencies from requiring background checks on firearm recipients unless a uniform national standard is required.

We believe in gun control, even the most modest measures can save lives. Because this measure was crafted to prevent realistic gun control measures, we vote NO.

This is a baby step for an issue that has torn communities apart for years. We vote YES.

Early Learning programs, Proposition Numbers 1A and 1B

This is going to be a wildcard for voters. Struggling to fire up an early learning system from a dead stop, a lot of well-meaning people have compiled their ideas into what looks like two competing measures; now voters must sort that out. First, voters tick the box for whether either of the plans should be implemented – THEN voters tick the box that says WHICH MEASURE SHOULD BE ENACTED.  The clunky instructions don’t help. “Simple Majority as to the first question; if first question is approved, then the option with the most votes as to second question,” the ballot says.

Faced with Proposition 1A (submitted by Initiative Petition No. 107), which has many great ideas to recommend it including limiting the cost of childcare and requiring an effective wage floor, we instead support Proposition 1B because it has built-in yet limited funding – a new tax for the next four years. We vote YES on WHETHER EITHER OF THESE MEASURES SHOULD BE PASSED, and then, YES on Proposition 1B.

Seattle is one of the most transportation-plagued big cities in the country. But do voters support public transit? This measure would increase the tax on vehicle tags by $60 per year with a 0.1 percent sales and use tax – including a $20 rebate for low-income riders – to shore up crucial bus routes set to be cut in 2015, with modest support for low-income riders. The fee and the tax would sunset Dec. 31, 2020. It’s a real financial bite – but is it worth it to avoid ever-growing traffic snarls in the Emerald City? We vote YES.