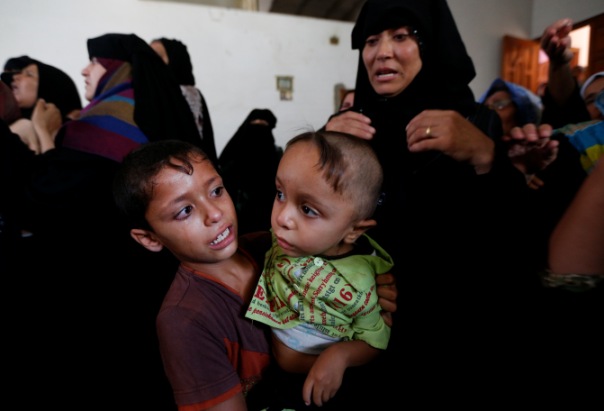 Palestinian mourners look on as the body of Bashir Abdel Aal, killed in an overnight Israeli missile strike in Rafah, southern Gaza Strip, is carried away from the family house, during his funeral, Thursday, July 17, 2014. Palestinian health officials say that in total, 227 Palestinians have been killed. On the Israeli side, one man was killed since July 8. (AP Photo/Lefteris Pitarakis)

A new round of hostilities in the Mideast comes after the abduction and killing of three Israeli teens, followed by the murder of a Palestinian teen. Israel  said Hamas was responsible for the killings and sent troops into the West Bank arresting hundreds. Palestinians saw that as indiscriminate punishment. That is understandable.

Also understandable is Israel's fear and its anger at Hamas. Surrounded by unfriendly states, and with a brutal conflict underway in neighboring Syria, Israel must be concerned with self-defense. But what Israel calls defense often  looks  more like offense.

In this conflict, Israel has vastly superior firepower and defense capabilities. Hamas may be equally intent on inflicting damage, but in reality has far less ability to do so. Israeli homes contain reinforced rooms designed to act as shelters, and the country is protected by an anti-missile shield. Palestinian civilians in Gaza are trapped with no place to run or hide.

As of this writing, the conflict has left 220 Palestinians dead and more than 1600 injured. Many of the dead are civilians and some are children. On the Israeli side the casualties are fewer with several injured and one dead.

Yesterday Israel halted the bombing for a five-hour humanitarian truce. Now that's over, Hamas is once again firing rockets into Israeli territory and Israel has resumed the deadly strikes.

Ultimatums and tough talk have left both sides with little room to move.  But what we know is that violence leads to more violence. And the longer the bombing and rocket fire continues, the further into the future recedes any chance of peace.  It's a vicious cycle that has been going on for decades now. How many more generations must be tainted by hatred?

Peacebuilding requires sustained effort and a willingness to compromise. Part of any long-term solution must be a commitment from Israel to stop Israeli settlement in the West Bank. Failing to rein in the settlers, and using disproportionate force in Gaza and on the West Bank, has only empowered  the extremists in Hamas. Building peace means being willing to take the first step towards peace. The Israeli government has shown it is willing to take that step toward a ceasefire. Now is the time to continue working with international mediators to achieve peace.

Secretary of State John Kerry should stand ready to continue negotiating with all sides to lay the groundwork for  a long-term peace that will benefit everyone in the Mideast.