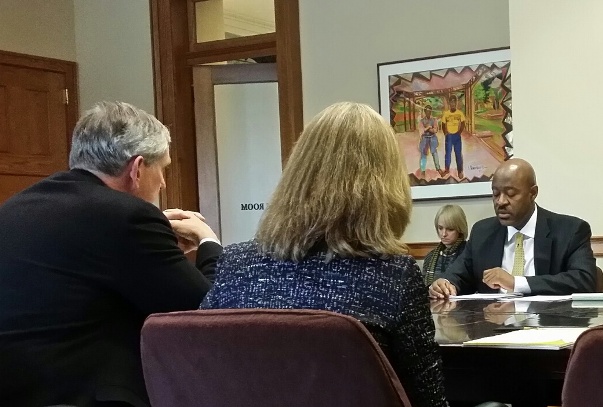 Former Chief Administrative Officer Jack Graham last month was granted a name-clearing hearing to air the truth about what really happened when he was accused of fiscal mismanagement in 2012 after being asked by then-Mayor Sam Adams to help find funds for Portland Public Schools, which faced a huge budget shortfall that year.

This week Graham filed a tort claim against the City of Portland alleging racial discrimination – and rightly so.

The facts of Graham’s case are shocking and point to the fact that a handful of city officials have smeared his professional name using hearsay and a poorly-done “investigation” – without offering Graham due process or even the chance to rebut the charges.

The allegations of wrongdoing against Graham were brought by Office of Management and Finance Financial Planning Division Manager Andrew Scott and Chief Financial Officer Richard Goward, who billed themselves as “whistleblowers” out to prevent an improper money transfer, earmarked as part of a $7 million money pot to support Portland Public Schools, between city bank accounts.

However a quick look at their case reveals gaping holes – not just with the two bureaucrats but also with city leadership.

Firstly, the timing of the city’s “investigation” shows it wasn’t completed until two years after the alleged impropriety – right as city officials proposed a reorganization of finance offices that would undermine Graham’s position and put Smith in charge.

But most noteworthy is a previously-confidential internal memo from City of Portland Human Resources Director Anna Kanwit that says in 2011 Scott carried out the same kind of financial move he accused Graham of doing in 2012 – except Scott did shift more than $500,000 earmarked for the Portland Police's new Kelly Building, apparently without any public disclosure.

"While there may be an explanation, based on the facts found to date the two events appear identical except that in 2012 the transfer never actually occured," Kanwit wrote.

Why the double standard?

Graham was blindsided by three City Commissioners who spoke to the media without ever trying to get his side of the story.

In so doing they took out the top-ranking African American administrator in the disproportionately-white city government.

This case goes to the heart of why more African Americans are not rising in the ranks of city government. Are they supported by their peers? Are they treated fairly when conflict arises?

At his name-clearing hearing, Graham asked Mayor Charlie Hales for a letter from the City clearing his professional name from the false accusations spelled out in its “investigation.”

Graham has had more than a letter since then. The city has given him $250,000. Nevertheless, he has launched a racial discrimination suit. Some may fault him for seeking more damages from the city. But the man's career and good name were irreparably damaged by the allegations and adverse publicity he went through.