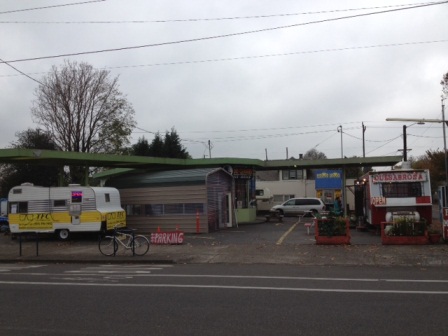 You're a great cook. You've always dreamed of opening your own café or catering business. And in an economy that has left so many of us downsized and dirt poor, turning your delicious gumbo into tasty greenbacks looks like an easy and fun way to weather the storm. So what's the catch?

"If you are preparing food and you want to start a home business, there is potentially a risk there," said William E. Keene, who heads up the State of Oregon's Office of Disease Prevention and Epidemiology. "If you are a commercial person you have a legal responsibility.  "If you are just making food for your family, then if something gets contaminated you only make your family sick. But if you are selling food to the public you can make hundreds of people sick."

That's why anyone who sells food must follow Oregon's Food Safety laws. They apply to every one of Portland's 2500 restaurants and 534 food carts – as well as every caterer, however small.

Keene and his team are food detectives. They follow up on reports of serious illness, asking questions and checking food handling practices in kitchens, warehouses and food factories across the state. He says most problems he sees can be avoided by following basic food handling rules: like washing hands, and properly refrigerating food. But sometimes it takes a food detective to figure out why people are getting sick.

Take the salmonella outbreak that was traced back to the Umpqua dairy. Only one person in a million among those buying the dairy's milk was getting sick. But the link was definite.

"We were puzzled because pasteurized milk is usually extremely safe," Keene said. The dairy workers seemed to be doing everything right. And, in fact, they were. But dogged investigators finally identified the source of contamination as a machine used to wash the cases that held milk cartons.

"It was the plumbing inside the pipes," Keene said. "So the milk was fine. It was the outside of the cartons that was getting contaminated, and people were occasionally getting sick from handling them."

The problem was quickly fixed, but it cost Umpqua plenty in recalled product, as well as bringing the kind of publicity no dairy wants. And the company was following all the rules. Restaurants and food suppliers who don't follow the rules face penalties such as: fines of up to $10,000, having their products condemned, and being closed down.

Food safety rules apply to small caterers, cafes and food carts – as well as to those large, high volume food suppliers. A team of four inspectors work to visit every eatery in Multnomah County at least once a year. And if you want to check out how your favorite café fared, you can see the inspection report online.

Food safety experts say the rules may seem strict, but the alternative is far worse. "People get really mad when their kids die from these illnesses," Keene said. "That's what we are trying to prevent. It's not a game. So that's why commercial establishments have to pay their license fees. We think it's money well spent."

So You Want To Start a Food Business?  Here's What You Do.

If in doubt, help is available from Multnomah County's "Sanitarian of the Day" a food safety expert who can answer any of your questions. Call: 503-988-3400