How Big Is Your Camera? the White House Wants to Know

Editor's note: The Skanner News Multimedia Editor Helen Silvis holds a master's degree from Northwestern University's Medill School of Journalism. A media instructor at Portland Community College, she was selected in 2011 for a weeklong training at the Knight Digital Media Center at UC Berkeley. She is a 2012 juvenile justice fellow at the John Jay College's Center on Media, Crime and Justice in New York City. Silvis has won the National Newspaper Publisher Association's A. Phillip Randolph Messenger Award three times.

In this age of multimedia journalism, the way the press works is changing and so are our tools. So a smart phone is also a camera, a video camera, a social media hotline and a way to put our stories on the Internet in a flash. Can somebody tell the White House?

When First Lady Michelle Obama gave the commencement address at Oregon State University on June 17, news media were invited to attend and record the occasion.  For staff at The Skanner News this was an exciting opportunity to take our readers into the heart of an event and take unique photographs of our popular First Lady.

Unfortunately, after more than two hours stationed  on Reser Field, a White House staffer suddenly excluded me, and later two other people, from the photography pool. She prevented us from doing our jobs, not because we weren't invited and accredited to be there, but because, she said, our cameras were not big enough.  No, I'm not joking.

Here's how it played out:

Journalists covering the event went through a rigorous screening. We submitted our full names, dates of birth and social security numbers for vetting by the Secret Service. I requested and received photographer credentials.

In an email, we were told to arrive promptly at 1 p.m., and be ready for a mandatory briefing at 1:15. I was there, along with TV crews, writers and photographers from news outlets around the state. A Homeland Security officer with a sniffer dog examined our equipment. 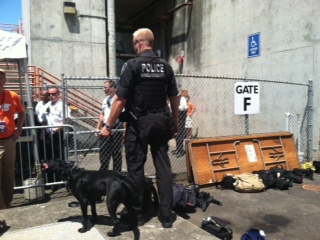 We expected tight security and we got it. Photographers couldn't move from our station beside the stage without chaperones. The White House staffer in charge of the press barked orders and threatened to cut off access, if her instructions weren't followed to the letter. But I think we all understood that Mrs. Obama's security must come first, and the Oregon Press Corps was on its best behavior.

At 3:30 p.m., minutes before we were to be escorted to take photos of the procession, this staffer suddenly noticed I was using an iPhone 4G – as my  reporting tool. "What's that?" she said. I told her it was my camera. She said it wasn't a camera. And before I could plead my case, she told me,  "I need you to leave the field immediately. You need to go sit in the print section."

I rushed to show her my photographer credentials, explained I was a multimedia journalist and often worked with my phone. I threw open my bag to show her I had even brought another camera with me. (When the new memory card I'd just bought did not work, I had kicked myself for not testing it beforehand. But no problem: I had my other camera -- my smart phone.)

Stony-faced, this staffer refused to listen to a word. Then she stalked away in her gold platform shoes.

Protesting, quite politely I must add, that this was wrong and unfair, I was forced to leave the field. From the stands, my photographs were limited. 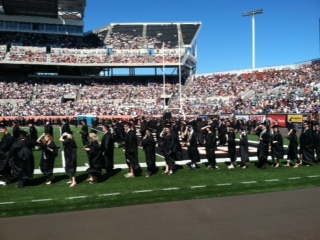 I had to watch other photographers being escorted around the field where they could get close-up shots that our readers would not see.

It seemed so stupid, I thought she would surely reconsider if she thought it through. First I spoke to Lauren Mackevich, her assistant, and explained again that I am a multimedia reporter, and my phone is one of my main tools. I added that The Skanner News was the only African American owned media outlet present. I wanted to make the point that our readers deserve the same courtesy extended to other news outlets.

That resulted only in two other people in the photography pool being thrown off the field, presumably to deflect any (imaginary)  charges of racial bias.

Finally, I tried once more to capture the staffer's attention as she walked past me with other photographers in tow. But she set her jaw and deliberately ignored me.

Prevented from doing my job, I posted the story I had. Later I spoke to staff at OSU, who watched the whole episode unfold. They apologized, and did everything they could to help, quickly sending me photos they had commissioned from Chris Ho Photography. Without their assistance we would have had no photos of the First Lady.

Sadly, her behavior reflects on how the White House goes about its business. That staffer sent a message that is the exact opposite of everything that Michelle Obama represents. The First Lady is a byword for graciousness. Surely she would be embarrassed by such rude and frankly ignorant behavior.

Of course, on a personal level I was bitterly disappointed, since I'd given up my day off for the hours-long drive to Corvallis and back for the opportunity to photograph the First Lady.

But what happened in Reser Stadium is bigger than one news story. White House staffers should not be dictating which tools journalists can use to do our jobs -- especially when their judgment is based on outdated prejudices that bear no relation to the realities of reporting in the digital age.

One last thing: The Skanner News has a community of readers who are inclined to be Mrs. Obama's biggest fans and supporters. This incident is a slap in the face to us, and to everyday people who aren't represented by big media and their big, big equipment bags.