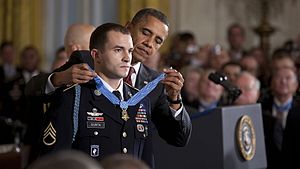 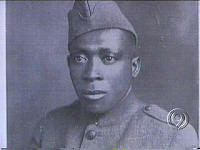 Two weeks ago, Nov. 16, President Obama awarded Staff Sergeant Sal Giunta America's highest military award, the Medal of Honor, recognizing his exceptional bravery during combat in rescuing a comrade from Taliban fighters in Afghanistan. His company was stationed in one of the most dangerous regions on earth: the Korangal Valley, known by soldiers as the Valley of Death, on the Pakistan Afghanistan border.

A supremely modest man, he feels that any soldier would have done what he did. But while it's true that many serviceman act with selfless courage during combat, Giunta's incredible bravery in confronting enemy fire to rescue his comrade was exceptional. Giunta well deserves the Medal of Honor.

Here at The Skanner we are struck by the similarity between his actions and the courageous behavior of another man in another war. Sgt. Henry Lincoln Johnson received the Croix de Guerre from the French government for his exceptional bravery during WWI, but was passed-over by his own country – because he was Black.
Compare for yourself:

Staff Sgt. Sal Giunta's Bravery in Combat
After dark on Oct. 25, 2007, Giunta and six other troops were returning to their outpost on a sparsely forested hill, when 10 to 15 insurgents ambushed them, attacking from both the north and the west, with AK 47s, 10 rocket propelled grenades and three machine guns. Two of the men were hit – one died immediately. As Giunta rushed to help a comrade who had been hit on the helmet, his ceramic vest plate was hit along with the weapon he was carrying.
Giunta and his men threw grenades to disrupt the attack and kept moving. As they advanced they helped Spc. Eckrode, who'd been wounded. Squad leader Errick Gallardo called a MEDEVAC. Giunta continued looking for Sgt. Joshua Brennan. When he couldn't find him Giunta ran after the retreating Taliban soldiers. Two of the insurgents were dragging the wounded Brennan away by his arms and legs. Giunta ran through enemy fire, firing at Brennan's captors. He killed one and wounded the other, who dropped Brennan and fled.
Giunta managed to pull Brennan to safety and looked after him until the MEDEVAC team arrived. Later that day Brennan died in surgery.

Sgt. Henry Lincoln Johnson's Courage in Combat
Johnson and a comrade, Needham Roberts, were on guard in a forward post, several hundred yards ahead of where their company was sleeping on the night of May 13, 1918. The terrain was the Argonne Forest, a heavily wooded plateau where the French were attacking an entrenched German force.
In the dark early hours of the morning they heard German voices, then the click of wire cutters clipping through their barbed wire defences. Needham and Johnson began furiously tossing grenades and firing at the attackers with their rifles. Enemy troops seized Johnson's rifle, but he pulled out his bolo knife and kept striking hard until he repelled them.
Through the darkness, he could detect figures dragging Roberts away. He followed and attacked the retreating troops. Unsure how many men they were up against, the German troops dropped Roberts and fled, firing back at Johnson and Roberts.
In the battle, Johnson had been shot three times and suffered numerous bayonet wounds. Roberts too was seriously wounded.
In daylight, the troops found seven pairs of wire cutters, 40 grenades and numerous other weapons. Investigators concluded that Johnson and Roberts between them had killed at least four enemy troops and wounded a dozen more. They held their post. The French recognized both men's heroism with the Croix de Guerre, the highest battle honor France can give.
But at home in the United States, Johnson and Roberts contributions were ignored. Finally, in 2003, a campaign succeeded in obtaining a Distinguished Service Cross for Sgt. Johnson. Herman A. Johnson, his son, a Tuskegee airman, accepted that award from President Bush. At The Skanner, we believe Sgt. Johnson was cheated of the Medal of Honor he so richly deserved.

Why, almost a century later does that matter? It matters because it was wrong. The French recognized many African American soldiers. The United States recognized not one single Black soldier from WWI.
Blogger MarineAuntie1 had this to say on the website AllMilitary.com, about Staff Sgt. Sal Giunta's Medal of Honor.
"Seeing this reminded me so much of my mother, who was proud of her Italian heritage and would have taken a proprietary interest in SSgt. Giunta's story."
African Americans would like to feel a similar sense of pride in our heroic heritage, but have been denied that satisfaction. It's never too late to right this wrong.
President Obama, it's time to give recognition to Sgt. Henry Lincoln Johnson and the Medal of Honor.
What Do You Think?