By Chris Levister for the NNPA from the Blackvoicenews.com
Published: 19 November 2010 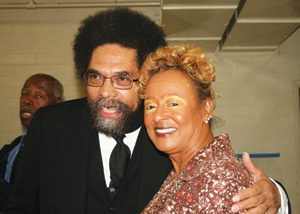 Praised for his "ferocious moral vision" Cornel West wasted little time living up to his reputation as one of America's most provocative public intellectuals. Speaking to a crowd of more than 1,000 people at Riverside City College (RCC) recently, the fiery orator took direct aim at President Barack Obama's policies toward the poor and working class calling them 'elitist and disappointing'.

"There's a Black man on top and millions of Black folks in the basement," said West.

"I applaud his brilliance and charisma, he changed the image of America, but where is the discourse on jobs for the working class and poor. He's giving speeches in Detroit but I won't hear him talking about that city's 25 percent unemployment among Black men. Job creation has been pushed to the margins." he said.

The culprit? Greed, says West, manifest in the action of players on Wall Street, "our televisual culture that's obsessed with superficial spectacle" and the education system "where the model becomes central."

"There's a sense that the country is in paralysis. Americans like to believe they can solve any problem. When they're in paralysis they start blaming folk. Unfortunately, they blame the weak they scapegoat," said West in interviews before and after his lecture.

West urged President Obama to resists calls from Republicans, who this month took control of the House of Representatives and closed in on the Democrat's Senate majority.

"He loves consensus, he loves bipartisan agreement and that's fine, but when it's clear that the other side has absolutely no interest whatsoever in that kind of consensus, you got to draw a line in the sand and dig in," he said.

"He's got an active right wing out there, a recession inherited from Bush, an unpopular war in Afghanistan, massive unemployment and soaring poverty. With those kinds of weighty issues you can't move into a kumbaya mode of existence. Instead, he's got to show backbone."

West said like Abraham Lincoln who led the abolitionist movement, like Franklin D. Roosevelt who led the labor movement, the president must create his own progressive movement to push his agenda for hope and change.

He warned that if President Obama fails to keep alive the legacy of Martin Luther King, Cesar Chavez, and other great civil rights leaders he will end up as "just another colorful caretaker of an empire in decline and a culture in decay."

Throughout his lecture, West, a professor of Religion at Princeton University, spoke of paideia. Paideia is Greek for education and instruction. "Students go to school and are still not educated. I don't hear our president talking about the new Jim Crow, the prison industrial complex. There is this pervasive notion that Black and Latino men are better off in the prison than in the classroom."

He had harsh words for the Black church "you see an ATM before you see the cross," he said. "There's a spiritual malnutrition tied to moral constipation, where people have a sense of what's right and what's good. They can't get it out because there's too much greed. It's just stuck. There's too much obsession with political and social reputation and addiction to narrow conceptions of success."

Following his talk, West sat on the stage with about 20 RCC students. He highlighted some of his philosophy on blues music, ideas on social justice, and universal love, which he called "spillover love." He made connections between music, social problems, democracy, and philosophy.

He challenged the students to "Lift Every Voice." "You need to look beyond the words in the book and understand the true philosophy behind them," he said. "People need to find their own voice and not be an echo and be original."

He related this back to modern music and how some artists' are copying from the greats such as Duke Ellington and Nina Simone.

Many of the students and members of the audience appeared awestruck by the colorful scholar, who has been described as an "intellectual provocateur". Not many of them knew that West was kicked out of school in the third grade. He refused to say the Pledge of Allegiance to the American flag. "My uncle was lynched and then wrapped in the flag," West recalled. He credits the power of love in the West family. "They provided a positive outlook for the rage instilled in me."

When a student asked if America could ever be free of racism, West struggled lacing his fingers his exuberant expression sat on pause.

"Race is the most explosive issue in American life precisely because it forces us to confront the tragic facts of poverty and paranoia, despair and distrust," he said as he signed autographs after the event.

West burst onto the national scene in 1993 with his bestselling book Race Matters, a searing analysis of racism in American democracy. In his life story Brother West: Living and Loving Out Loud, he offers a compelling exploration of his heart behind the human mind.

"He is not afraid to speak frankly and from the heart," said Babitsky "While he presents many criticisms, he also offers many solutions. Not everyone will agree with his point of view, but if one of his objectives is to make people at least think about the problems he has dissected then he has succeeded admirably."