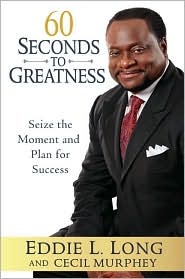 ATLANTA – As a Christian author, gospel singer and leader of one of the nation's best-known black megachurches, Bishop Eddie Long finds a wide audience for messages such as marriage is "between one man and one woman." Those words hung heavy Wednesday over accusations that the TV preacher, a married father of four, used jewelry, cars and cash to lure three young men into sexual relationships.
Lawsuits filed Tuesday and Wednesday say the young men were 17 or 18 years old at the time, enrolled in New Birth Missionary Baptist Church's ministry for teen boys.
A lawyer for Long, who writes books on heterosexual relationships and has strong ties to the Rev. Martin Luther King Jr.'s family, adamantly denied the allegations. Few at Long's 25,000-strong church will discuss the situation, and the grounds were quiet Wednesday save for a small group walking in prayer. But those who will speak say they are supporting him.
Lance Robertson, who joined New Birth nearly two decades ago and has coached youth basketball there, said Wednesday that members were hurting.
"I support and will stand with my bishop, but right now in the court of public opinion, it does not look good," Robertson said. "This affects too many people. As the bishop goes, New Birth goes. He built New Birth."
B.J. Bernstein, an attorney representing the plaintiffs, said she opened her investigation after getting a call from one of the men. The Associated Press normally does not name people who claim they are victims of sexual impropriety, but Bernstein said all three — Maurice Robinson, 20, and Anthony Flagg, 21, and Jamal Parris, 23 — have consented to making their identities public.
Bernstein said she didn't trust local authorities to investigate the claims.
"This is a really large church that's incredibly politically powerful," Bernstein said. "There are pictures of this guy with every politician around. With something this important, how can I trust that word didn't get back to the bishop?"
DeKalb County Sheriff Thomas Brown has been a member of New Birth for more than 15 years and sits on the advisory board for Long's Longfellows Youth Academy. He said he would stand by the bishop and bristled at Bernstein's suggestion that local authorities couldn't be trusted.
"I take offense to that," he said. "It does not merit a dignified response."
Bernstein said that her case hinges on her three clients' testimony and that she doesn't have much physical evidence backing up her complaint. Bishop sent dozens of e-mails and phone calls to her clients, though they weren't "overly sexual," she said. Bernstein said she plans to subpoena records from Long that will show he traveled with the young men to New York, Las Vegas, New Zealand and elsewhere.
Long has been silent since the lawsuits were filed, though he did have a news conference planned for Thursday. But urban radio, Internet sites like Facebook and Twitter, and cable television news shows have been abuzz.
Atlanta radio host Frank Ski devoted much of his 4-hour morning show to the issue. Ski, a 12-year member of New Birth, called the accusations "painful" and said he doesn't believe them.
Ski said he and his fellow church members are generally supportive of Long and are awaiting the outcome of the case.
"This church is used to the controversy coming against him," Ski said. "It's all about faith. When you have faith, you understand that those kinds of things will happen."
Robertson, the church's youth basketball coach, said he wants to hear Long respond to the accusations.
"The bishop has helped so many people," he said. "It's not uncommon for him to mentor young men and groom them to be productive members of society. The bishop's heart has always been in the right place. But the New Birth family, we're weeping. This is not a good day for New Birth."
Long, who was appointed pastor of New Birth in 1987, presides over an empire that claims athletes, politicians and entertainers as members.
President George W. Bush and three former presidents visited the sprawling New Birth Missionary Baptist Church in the Atlanta suburb of Lithonia for the 2006 funeral of Coretta Scott King, the widow of the Rev. Martin Luther King Jr. Long introduced the speakers and the Rev. Bernice King, the Kings' younger daughter, delivered the eulogy. She is also a pastor there.
Today, New Birth sits on 250 acres and has more than 25,000 members, a $50 million, 10,000-seat cathedral and more than 40 ministries.
Not all of his attention, though, has been positive. The church was among those named in 2007 in a Senate committee's investigation into a half-dozen Christian ministries over their financing.
Long has called for a national ban on same-sex marriage. In 2004, he led a march with Bernice King to her father's Atlanta grave to support a national constitutional amendment to protect marriage "between one man and one woman."
This isn't the first allegation against a religious leader who has crusaded against gay marriage. Ted Haggard left New Life Church of Colorado Springs, Colo., in 2006 after a male prostitute said Haggard paid him for sex. Haggard denied the allegations but later admitted to "sexual immorality" and launched a new church in June 2010.