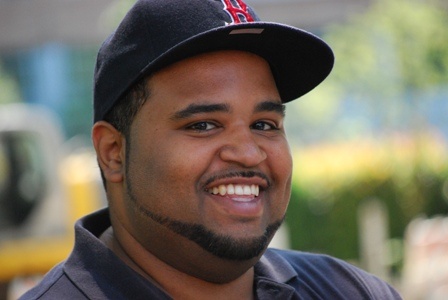 USA Football, the sport's national governing body on youth and amateur levels, has selected Damon Miller of the Portland Police Athletic League to attend the 2010 NFL/USA Football Youth Football Summit in Canton, Ohio, from July 21-22.
Miller is PAL's community programs director and the commissioner of Portland PAL's Youth Football League, which includes 800 youth football players living in Gresham, Fairview, Troutdale and Portland.
"Learning strategies from the best can only improve my effectiveness as the PAL Youth Football Commissioner," Miller said. "The strength of our league resides in our coaches' dedication and commitment to everything the NFL and USA Football stand for."
Miller and youth football leaders from throughout the region attended USA Football's Oregon State Leadership Forum on March 6. Miller was selected at the event to represent the area at the youth football summit in Canton. USA Football's Oregon State Leadership Forum is among dozens of meetings that the non-profit holds across the country to share best practices within the youth football community.
USA Football is the official youth football development partner of the NFL, its 32 teams and the NFL Players Association.
USA Football's 2010 State Leadership Forum schedule will reach hundreds of league commissioners nationwide to support approximately 20,000 coaches and 500,000 youngsters.
Miller himself participated in PAL football as a youth during his years as a student at Grant High School.
"I plan to learn from the past and present greatness of the NFL and, by doing so, inspire the youth coaches, players and community who will one day contribute to the NFL's legacy," Miller said. "My participation will inspire me to make strides toward our mission of improving the game of football and how it will affect the lives of our youth participants."
"Since 2006, dedicated volunteers who power youth football leagues continue to enjoy sharing their knowledge and ideas at our state forums," USA Football Executive Director Scott Hallenbeck said. "We're pleased to have Damon contribute to this discussion on a national level at this summer's youth football summit in Canton, thanks to the support of the NFL and the NFL Players Association."
The NFL/USA Football Youth Summit, funded by the NFL and NFL Players Association, assembles nearly 200 youth and high school coaches from all 50 states and Washington, D.C., along with grassroots football leaders, including former NFL players now coaching at the high school level.
Among the topics discussed at the NFL/USA Football Youth Summit are:
-- Inspiring youngsters to reach their potential as people and athletes;
-- USA Football's CDC-approved concussion awareness and management information;
-- The NFL's ATLAS & ATHENA Anti-Steroid Education Program; and
-- Role-playing demonstrations regarding coach-player-parent relationships
Established in 1998 by the NFL and the NFL Players Association, the NFL YFF seeks to use football as a catalyst to promote positive youth development, support youth and high school football needs nationwide and also ensure the health of grassroots football in future generations.