More than 100 supporters joined a picket line in front of the Justice Center Thursday morning for Aaron Campbell, an unarmed Black man shot in the back under bitterly contested circumstances by a Portland Police officer Jan. 29. 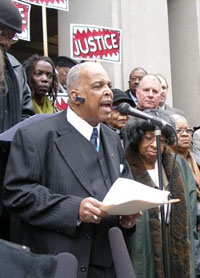 Meanwhile, Multnomah County District Attorney Michael Schrunk made public an unprecedented open letter of protest written by the members of the grand jury that this week exonerated the officer of criminal wrongdoing. The letter reveals new details of the incident that contradict previous statements by law enforcement in the case.
To read the letter click here: http://www.theskanner.com/grandjuryopenletter.pdf Schrunk's office confirmed that the issue of releasing to the public the entire transcript of the grand jury's investigation is pending before a judge next week and should be decided by Thursday, Feb. 18.
"Aaron Campbell was not accused of a crime, yet he lost his life that day, and his Mother lost two sons that day," the grand jury letter says.
"Portland deserves better.
"Aaron Campbell deserves better."

Killed During 'Welfare Check'
Campbell was fatally shot in the back during a "welfare check" after a friend of his girlfriend called 9-1-1 to report that he was suicidal after the death that morning of his younger brother, a heart transplant recipient who had been in failing health for weeks.
The friend told dispatchers that Campbell had a gun, and was in the company of his girlfriend and her three small children.
Police sent crisis negotiators as well as dozens of officers to the scene at an apartment building on Northeast Sandy Boulevard to cordon off traffic in the area at approximately 4:20 p.m. Within an hour the girlfriend and the children all had left the apartment unharmed.
At 6:08 p.m., dispatcher records show that Campbell emerged from the apartment, walking backward with his hands on his head. Within one minute of exiting his apartment, however, records show that shots had been fired and Campbell was "down."
Police officials have said that after leaving the apartment, Campbell started to become noncompliant, shouting that they would have to shoot him. 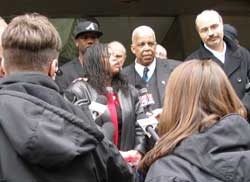 Police maintain that Campbell was shot in the back with multiple rounds from a bean bag shotgun after he appeared to move his hands. The dispatcher record logs the beanbag rounds were fired at 6:08 p.m. and seven seconds.
The police say Officer Ron Frashour then shot Campbell in the back with an AR-15 rifle because he started running away and reaching into his back waistband for what Frashour believed to be a gun. A gun was later found in a closet in the dead man's apartment but none was found on or near his body. Dispatch logs record Frashour's shot at 6:08 p.m. and 16 seconds.
Campbell appears to have bled to death on the ground, as police waited more than 20 minutes for a special emergency medical squad to check his vital signs, because, they said, they were not sure if he was still dangerous. Details from his autopsy have not yet been made public.

New Details Emerge on Use of Attack Dog
The grand jury letter revealed previously unreported details about the shooting scene, including the fact that the shooter did not know that a crisis negotiator was working with Campbell; no family members were brought in to help in the negotiation although several were on site; and the officer in charge of the scene failed to alert all the tactical operations members about the nature of the situation and that Campbell "had specifically and emphatically said he was not going to hurt himself or anyone else."
Police officials have previously confirmed that a K9 unit was also unleashed on Campbell, but few details had emerged about that aspect of the death scene until the grand jury's letter was released.
In fact, the letter indicates that police officers disagree about whether an attack dog released on Campbell at the scene was in motion before, during or after the fatal shot was fired.
Current policy regarding use of K9 units allows for a police dog to "take down" an individual without shots fired, the letter says, and the dog's handler testified that he let the dog loose on Campbell before shots were fired.
Frashour testified that he never saw a dog "running to attack Mr. Campbell," the letter says. "Had these two groups been better coordinated, Officer Frashour might have delayed his shot, waiting to see if the dog could successfully take Mr. Campbell down."
The grand jury letter blasted the fact that, jury members said, Frashour's "actions were consistent with the relevant laws and statutes regarding the use of deadly force by a police officer."
The dispatcher log does not note deployment of the attack dog at all.

Officer 'Trained to Be a Shooter'
The grand jury letter indicates that several police witnesses contradicted Frashour's claim that Campbell's hands were "reaching for his waistband," including one officer who testified that Campbell's hands were not visible at all when he started running away from officers after being shot repeatedly with beanbag rounds.
"By his own testimony, Officer Frashour was so focused on keeping his sights on Campbell's 'center of mass' that he didn't really digest what the other officers were saying to Campbell as he backed out of his apartment with his hands on his head," the letter says.
"Officer Frashour was over-trained to be the shooter, and under-trained to reassess the situation based on changes to the available information."
In the letter, the unnamed members of the grand jury repeatedly condemn the inadequacy of current regulations regarding use of force for police officers, which they said left them with no choice but to exonerate Frashour.

Grand Jury Letter Demands Reform
"That is not to say that we found him innocent, agreed with his decisions, or found that the police incident at Sandy Terrace was without flaw," the letter states.
"This was very difficult for us as a grand jury, as our sympathies lie with the Campbell family and the mood of the community.
"As a group, we are outraged at what happened at Sandy Terrace," the jury members say.
The grand jury members, in their letter to Schrunk, call on him to push the Portland Police Department to change its policies on use of force.
"We feel that his death resulted from flawed policies, incomplete or inappropriate training, incomplete communication, and other issues with the police effort," the letter continues.
"We feel strongly that something must be done to correct this, and the Portland Police Bureau (PPB) should be held responsible for this tragedy."

Demonstrators Echo Grand Jury's Outrage
At the Thursday morning demonstration, organized by the Albina Ministerial Alliance, the Rev. Leroy Haynes said the community is disappointed "once again" in the inability of the grand jury system to ever hold police officers accountable for questionable shootings.
"Therefore, we call upon the district attorney and the Portland City Council to support holding a public inquiry regarding the death of Aaron Campbell and to establish a special prosecutor for police excessive force and deadly force cases," he said.
In addition to calling for an independent prosecutor, the Alliance called for a complete review by Police Chief Rosie Sizer and City Council of use of force policies and training; support of Commissioner Randy Leonard's proposal to strengthen the Independent Police Review and give them the power of subpoena; and for the state legislator to narrow the legal language that allows police officers to use deadly force.
Bishop A.A. Wells said there are ways that all professionals who deal with life and death situations are held to a reasonable standard.
"There are ways you can measure 'reasonable,'" Wells said. "Right now, all he (a police officer) has to say is that his life was in danger."
Joice Taylor, president of the African American Alliance, called for the United States Justice Department to investigate why so many unarmed citizens have been killed by Portland Police – many of them Black.
Both Wells and Imam Mikal Shabazz said the city needs to evaluate who they hire to wear a badge and a gun.
"They were paralyzed by so much fear that they will leave a wounded man for 30 minutes on the pavement until they know he is dead before giving him medical assistance," he said.
The Portland Police Union opposes releasing transcripts from the normally-secret grand jury proceedings. Mayor Sam Adams and Police Commissioner Dan Saltzman have both released statements this week confirming their support for a public airing of the facts.
"My support for recording and publishing after-the-fact grand jury proceedings regarding law enforcement use of lethal force dates back to a bill I testified in support of during the 2007 legislative session, to increase transparency for our community," Adams said in a statement released Wednesday afternoon.