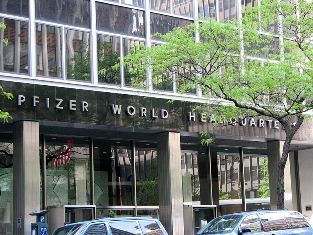 Pfizer will pay roughly $45 million to the Securities and Exchange Commission to settle charges that the company, along with fellow pharmaceutical firm Wyeth, which Pfizer acquired a few years ago, violated the Foreign Corrupt Practices Act.

Pfizer also entered into a deferred prosecution agreement with the Department of Justice, agreeing to pay a $15 million penalty.

"Corrupt pay-offs to foreign officials in order to secure lucrative contracts creates an inherently uneven marketplace and puts honest companies at a disadvantage," James McJunkin of the FBI's Washington field office said in a statement.

Pfizer noted that there is no allegation that anyone at the company's corporate headquarters knew of the conduct in question, which it voluntarily reported to the government.

"The actions which led to this resolution were disappointing, but the openness and speed with which Pfizer voluntarily disclosed and addressed them reflects our true culture and the real value we place on integrity and meeting commitments," Amy Schulman, executive vice president and general counsel at Pfizer, said in a statement.

The SEC said the violations date as far back as 2001, and that Pfizer initially reported them in 2004.

Shares of Pfizer were down 1.7% in mid-day trading Tuesday.