Romney to Face Rivals in His First 2012 Debate 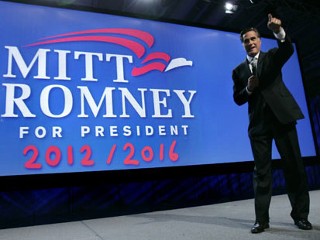 MANCHESTER, N.H. (AP) -- Mitt Romney readied Monday to share a debate stage for the first time with six of the likely rivals who want to strip him of his perceived frontrunner mantle for the Republican presidential nomination.

Romney, who has emerged as the GOP's candidate to beat during his second presidential bid, was going into his first debate with his critics already telegraphing their eagerness to link the former Massachusetts governor with President Barack Obama's health care overhaul. Conservatives loathe the Democrats' plan that mandates all Americans have health insurance and was modeled on a Massachusetts law Romney signed into law.

"I strongly oppose the individual mandate at any level," former Minnesota Gov. Tim Pawlenty said on Sunday, previewing an expected line of criticism toward Romney. "I think it's a dramatic overreach."

Elbowing Romney, Pawlenty said Obama had stated that "he designed Obamacare after Romneycare and basically made it Obamneycare."

Pawlenty was looking to use the evening debate to pitch himself as an alternative to Romney, who came up short four years ago in his bid for the nomination and hardly stopped campaigning. Conservatives who hold great sway in the nominating process, however, aren't rallying around Romney and are looking for an alternative.

Former Sen. John E. Sununu of New Hampshire said the debate was an opportunity for Pawlenty "to move himself into a one-on-one campaign with Mitt Romney."

"It's still early. No one has to bedazzle. But it's an opportunity for Pawlenty to pull out of that pack a little bit and show that this has the potential to be a strong two-man race," Sununu told CNN's "State of the Union" on Sunday.

Former House Speaker Newt Gingrich of Georgia also was set to make his presidential debate debut just days after his senior staff resigned en masse. Gingrich, who left Congress in 1999, on Sunday sought to restart his campaign and promised to wage a campaign to make Obama a one-term president.

Rep. Michele Bachmann of Minnesota, too, was making her first appearance in a presidential debate. Although not yet a formal candidate, the tea party favorite is expected to join the field soon.

Businessman Herman Cain of Georgia, Rep. Ron Paul of Texas and former Sen. Rick Santorum of Pennsylvania again will join a presidential debate; they participated in a South Carolina debate that Romney skipped earlier this year.

Former Utah Gov. Jon Huntsman, though, would be absent. A veteran of three Republican administrations before becoming Obama's ambassador to China, Hunstman is expected to join the field in the coming days. He has said he's not going to start debating before he announces he is officially running in a nominating process expected to formally begin with the Iowa caucuses in February of 2012.