On the evening of July 4, Columbia County police spotted a stolen car. Fifteen minutes later, after a high-speed chase along twisting country roads, the driver swerved to avoid a spike strip and crashed the car, which burst into flames. The driver died at the scene. A passenger was rushed to Emanuel Hospital, but died of injuries three days later.

Nationally, at least 360 people a year die during high speed police chases according to the National Highway Traffic Safety Administration. And fully one-third of these casualties are innocent bystanders. Geoffrey Alpert, professor of criminology at the University of South Carolina, and an expert in pursuit driving, says that number does not include people who die after the chase ends, even those who die minutes later. Alpert's research shows 30 to 40 percent of chases end with a crash.

In Yakima, June 20, Pascual Ayala and Marina Barajas lost their lives when a fleeing criminal slammed into their car as they were returning home from a baptism. And in May, Apostle Anthony L. Taylor, a well loved pastor leaving his church, was killed in Richmond, Va. Those are just two recent examples of high-speed pursuits that ended in tragedy for the innocent.

According to police Sgt. Ron Bianchi of Plymouth Va, who has studied the issue, many of those who flee are young and all of them are making poor decisions. However, in many cases they are not speeding or driving recklessly prior to the pursuit.

Law enforcement officers have to make snap decisions in these situations and understandably it is their instinct to pursue suspects. But law enforcement is not a contest of strength and will where any force can be justified to make sure the side of law triumphs. We're not saying delinquents and criminals should not be apprehended and charged. They should be. Just not by deadly macho stunts, but by smart, efficient, unspectacular police work. In this day of GPS and other technological advances, we have other, better tools on hand to apprehend lawbreakers.

Our police departments hardly have the resources to investigate car thefts and property crimes. So how can we justify such wild public safety risks to pursue petty criminals? In the Columbia County case, the rightful car owner won't be getting his car back.

Professor Alpert says many of the 17,000 police departments are bringing in policies to limit high speed chases because "chasing people for a traffic or property offense is not worth the risk to people's lives and wellbeing". No amount of money can bring back a dead parent, child or any other innocent life lost. 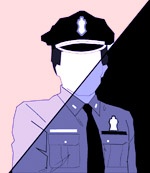 The City of Milwaukie changed its policies after four bystanders were killed in three separate chases within two months. Miami's Dade County allows police pursuits only when a violent felony -- such as murder or rape -- has been committed. In Dade County, pursuits dropped from 279 a year to 51. It's time for Oregon to rethink this outdated law enforcement tactic. Oregon should ban high speed chases in most circumstances.


What Do You Think?