World Cup Fans Have Their Say on Vuvuzela Pain 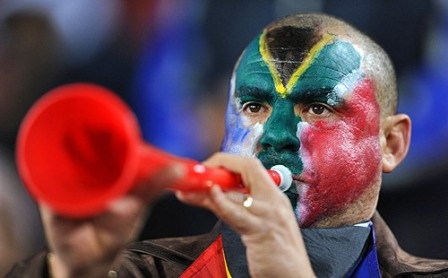 JOHANNESBURG (AP) -- Angry World Cup viewers, we, at least, hear your vuvuzela pain.
From as far away as the Himalayan mountain kingdom of Bhutan, you have e-mailed in droves to The Associated Press to complain that you are being driven loopy by the awful din of the trumpets that are spoiling the World Cup in South Africa.
``Fifteen minutes into the opening game and I already took two aspirin...,'' lamented Boaz Gabbai, from West Hills, California.
``Those vuvuzelas are making me nuts!!!'' wrote Myriam Seyfarth from Venezuela.
Do organizers care? They don't give a hoot. Their bottom line: the cheap plastic noise-polluters are a South African tradition. Those who don't like them can, well, lump it.
``I won't dwell too much on what outsiders think about vuvuzelas,'' says South Africa organizing committee spokesman Rich Mkhondo. ``I won't dwell too much on what the feelings of the spectators are.''
He is backed by FIFA president Sepp Blatter, who asked: ``Would you want to see a ban on the fan traditions in your country?''
Frankly, if they were as mind-meltingly annoying as this, yes.
While freely acknowledging that organizers have no intention of doing opinion research to confirm whether this is true, Mkhondo added: ``People love vuvuzelas around the world. Only a minority are against vuvuzelas.''
Well, AP reader Gillian McKenna in Bordeaux, France, would beg to disagree.
``PLEASE start a world-wide movement to get the vuvuzela banned,'' McKenna wrote in a response to a column I wrote this weekend complaining about the trumpets. ``It is destroying the pleasure. I have simply stopped watching or listening.''
In my column, I argued against the horns because their constant beehive drone mostly drowns out many of the usual sounds from football crowds _ ``Oooohhsss,'' ``Aaahhsss,'' songs and chanting _ that enhance the experience of watching games.
Not since I angered curlers by suggesting that their sorry excuse of a sport doesn't really deserve a spot at the Winter Olympics have so many people responded _ more than 100 in less than 24 hours. Opponents of the trumpets outnumbered supporters by a 3-to-1 ratio. Via Mkhondo, I passed the e-mails to South African organizers in hopes that they will take heed of the international mood.
``Extremely frustrated England fan'' Maureen Ling wrote: ``I & many other fans in the UK are having to mute each game - with the result that the commentators of the various TV Channels are not being heard, which seems to me to be a total waste of time & money for them!! The whole 'atmosphere' of World Cup Entertainment is lost! Are we REALLY expected to put up with this for another two weeks?''
Well, yes, Maureen, you are.
``The vuvuzelas are here to stay and they will never be banned,'' said Mkhondo. ``As our guests, please embrace our culture, please embrace the way we celebrate.''
British bookmakers William Hill are offering smallish odds of 16-to-1 that the horns will be banned before the World Cup final on July 11.
``It appears to be people who don't normally attend or watch football matches live and would rather sit and watch games in silence who are objecting to the vuvuzela,'' said Graham Sharpe, a William Hill spokesman. ``Besides which the noise helps drown out some of the commentators, whose own incomprehensible vocal babble is often far more offensive than any vuvuzela!''
Andy Romain was among the roughly 25 people who objected strongly, some of them insultingly so, to my anti-vuvuzela views.
``Your article reads as, ``can someone please shut these black people up.'' Which is unfortunate,'' he wrote. ``For the love of god, respect the culture, wait your turn, shut up, and enjoy the show.''
``At a football stadium, it's normal you can barely have a conversation at any time of a game,'' added Jules Bisong from the Netherlands. ``It's always extra loud; shouting, screaming, drumming, chanting, music, trumpeting, all mixed together. How has that never been a hassle, only now when South Africa is hosting the world cup? I'm not a South African, but you guys from the media should stop being bias, be more professional and maintain your respect, and most of all, give South Africa a break!''
However, gentlemen, it is not just South Africans who are blowing these horns, but fans of all stripes. And it is not the color of the people who blow that concerns me _ just the fact that they blow, at all.
Meg Cowper-Lewis, a South African, is on my side.
``This is NOT a South African Cup, it's not even an African Cup, it's a World Cup!'' she wrote. ``So for democracy's sake (on which we pride ourselves here in South Africa), do what the WORLD wants! It's disgracing our country and making our visitors fed-up - so it's up to FIFA to fix it for the majority!''
Namgay Wangchuk, the fan from Bhutan, wrote: ``We stay awake at midnight to watch it and we get this ``tuneless and annoying'' noise. Please make it stop. Please!''
The most frightening thing of all? The vuvuzela virus could, heaven forbid, spread beyond South African shores. What a terrifying World Cup legacy that would be.
``The vuvuzela is now an international instrument,'' said Mkhondo. ``People buy them and stuff them in their suitcases and take them home.''
So, quick, down to the barricades, comrades! Stop these trumpets from coming in!
You have nothing to lose but your hearing.